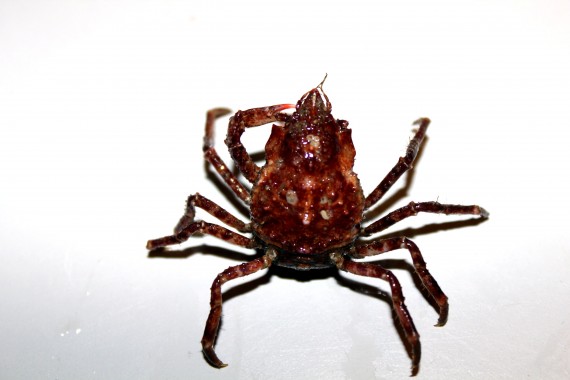 Cape Dorset is gearing up to try out an inshore commercial crab fishery.

The Baffin community’s hunters and trappers organization has plans to start surveying populations of Artic lyre crab this summer, with the support of the environmental group WWF-Canada.

The Artic lyre crab is similar to a snow crab, and would be fished in pot-style crab traps like those used in Atlantic Canadian fisheries.

It’s the first time the community has looked to kick-start a crab fishery since the 1990s. If the venture is successful, equipment used in the crab fishery could also be used for a small-scale shrimp fishery, said WWF Arctic fisheries specialist Doug Chiasson.

WWF announced the community fishery project on Monday, Nov. 26, when the organization released a new report that makes recommendations for sustainable economic development in northern regions.

The report is titled Getting it right in a new ocean: Bringing sustainable blue economy principles to the Arctic.

Through its ongoing fisheries pilot project, WWF-Canada is looking to work with Nunavut hamlets and hunters and trappers groups to build community fisheries that are “economically beneficial but also ecologically sustainable,” Chiasson said.

Cape Dorset is the first of three communities that will be given fisheries support by the WWF. The federal Department of Fisheries and Oceans and Nunavut Tunngavik Inc. both flagged the community of about 1,500 as viable for fishery development, Chiasson said.

Small-scale community fisheries could create jobs and help diversify the economy in the North. As well, marine life is a renewable resource when harvested sustainably, the WWF report says.

“We are extremely encouraged by the potential for a community-based, inshore fishery in Cape Dorset, which compared with other types of resource extraction, such as oil and gas development and mining, will benefit the community, and could become a blueprint for sustainable fisheries for years to come,” said Paul Crowley, WWF-Canada’s vice president of Arctic conservation.

The first step is to measure the size of the crab population to make sure it can support a fishery, and if so, to what degree.

Across the Arctic, WWF wants to see industry and government make a greater effort to work on economic development projects with Arctic Indigenous communities.

“There is no comprehensive outlook on ecological and socio-economic trends for the Arctic,” the report states. “We need to consult and work with Indigenous peoples in the Arctic to integrate their knowledge. This knowledge is valuable, and Indigenous peoples are the ones who will be most directly affected by the consequences of any development decisions.”

The report estimates that up to one trillion U.S. dollars could be invested in the Arctic internationally in the coming decade.

“Without proper policies in place, marine species such as fish, seals and whales will increasingly come into conflict with industrial activities—such as shipping and seismic exploration—and may be harmed by underwater noise and oil spills,” the report states.

“Canada has an opportunity to be a global leader in creating economic growth that doesn’t interfere with biodiversity,” the WWF’s report states.