Careful with what you flush: Iqaluit sewage overflow caused by “big wad of rags and plastic” 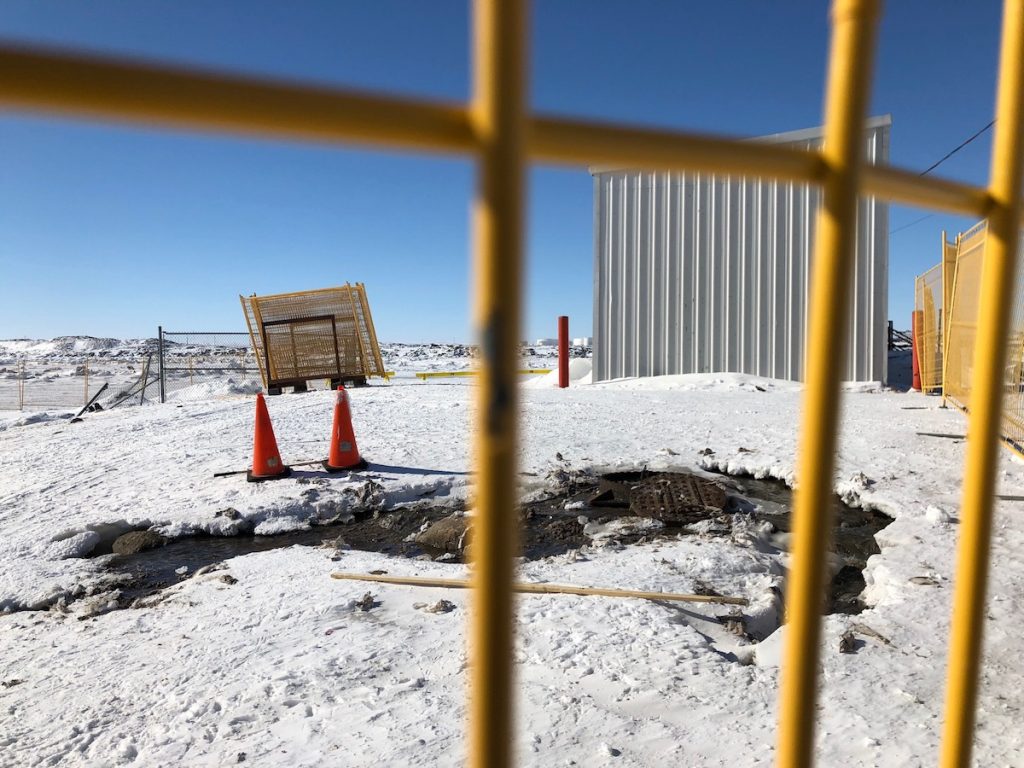 Untreated sewage has been spilling into Iqaluit’s bay after a blockage of rags and plastic formed in a major sewage line on March 28. (File photo)

Sewage overflowing from one of Iqaluit’s water lift stations has been seeping into Frobisher Bay for nearly a month.

Matthew Hamp, the city’s director of engineering and public works, said there’s no clear number for how much sewage has spilled into the bay so far. But he estimates that as much as 950,000 litres of sewage has spilled each day since March 28.

That could add to more than 20 million litres at this point.

The problem is a “big wad of rags and plastic” debris blocking the line near Lift Station 1, said Hamp. That’s one of the final stops for the city’s sewage before it’s pumped to the waste-water treatment site.

Don’t put garbage in the toilet

It seems clear that the blockage was produced by residents flushing rags and plastic down their toilets, said Hamp. The only other entry points to the city’s sewer system are just accessible to city employees.

“There aren’t a heck of a lot of other ways,” Hamp said.

He has seen things like plastic bags and diapers end up in sewage lines. “It highlights the need to be cognizant of what you’re flushing.”

Even if something does fit through a toilet when you try to flush it, that doesn’t mean it won’t block up the lines elsewhere in the sewage process, said Hamp.

City workers have managed to push the debris into the next main, but now it’s in the way of the pumps that are meant to push the fluids to the drain.

This means the city cannot turn those pumps on now without risking damage or creating much bigger sewage problems.

After several failed attempts to clear it out, the city has opted to try a new approach.

On Friday, the city received an industrial vacuum system. Hamp hopes this new equipment will finally dislodge the debris.

As for the sewage in the bay, the city is counting on the tide to carry it away at spring thaw.

“The city has a very strong tidal action, it’s one of the strongest tidal zones in Canada,” Hamp said.

Still, he said city workers will have to go out to the beach to evaluate the effects once the ice has melted.

This particular sewage line is not the one that is currently “at capacity” that’s prompted the City of Iqaluit to pass a new development charge bylaw to fund its replacement.

The new bylaw is effective now.

With it, all residents looking to build a new home will pay a fixed fee of $929.84 to go directly to sewer repair funds.

For any non-residential developments, the charge will be based on the size, at a rate of $7.88 per square metre of gross floor area.

The sewage blockage is one of many water and sewer problems the city has scrambled to fix recently.

Over the last six months, the city has seen many disruptions to water service, regular boil water advisories, a few burst water mains and instances of sewage seeping out around residences.

For about three months at the end of 2018 and the beginning of 2019, tenants in the the tallest building in Iqaluit were without water entirely or with very low water pressure.

Many of these issues come from the haphazard ways the city was built, with a lack of planning, strategy and resources—but another factor is climate change. With the city’s pipes buried in permafrost, they are subject to freezing and damage.

Mayor Madeleine Redfern told Nunatsiaq News recently, “We need to be doing something now so we avert a crisis.”

In just the first four months of 2019, Redfern said the city has had to spend over $300,000 to pay for unplanned water and sewage line repairs.

She estimated it would cost $256 million to completely replace Iqaluit’s water and sewage systems, or $198 million for a targeted replacement.