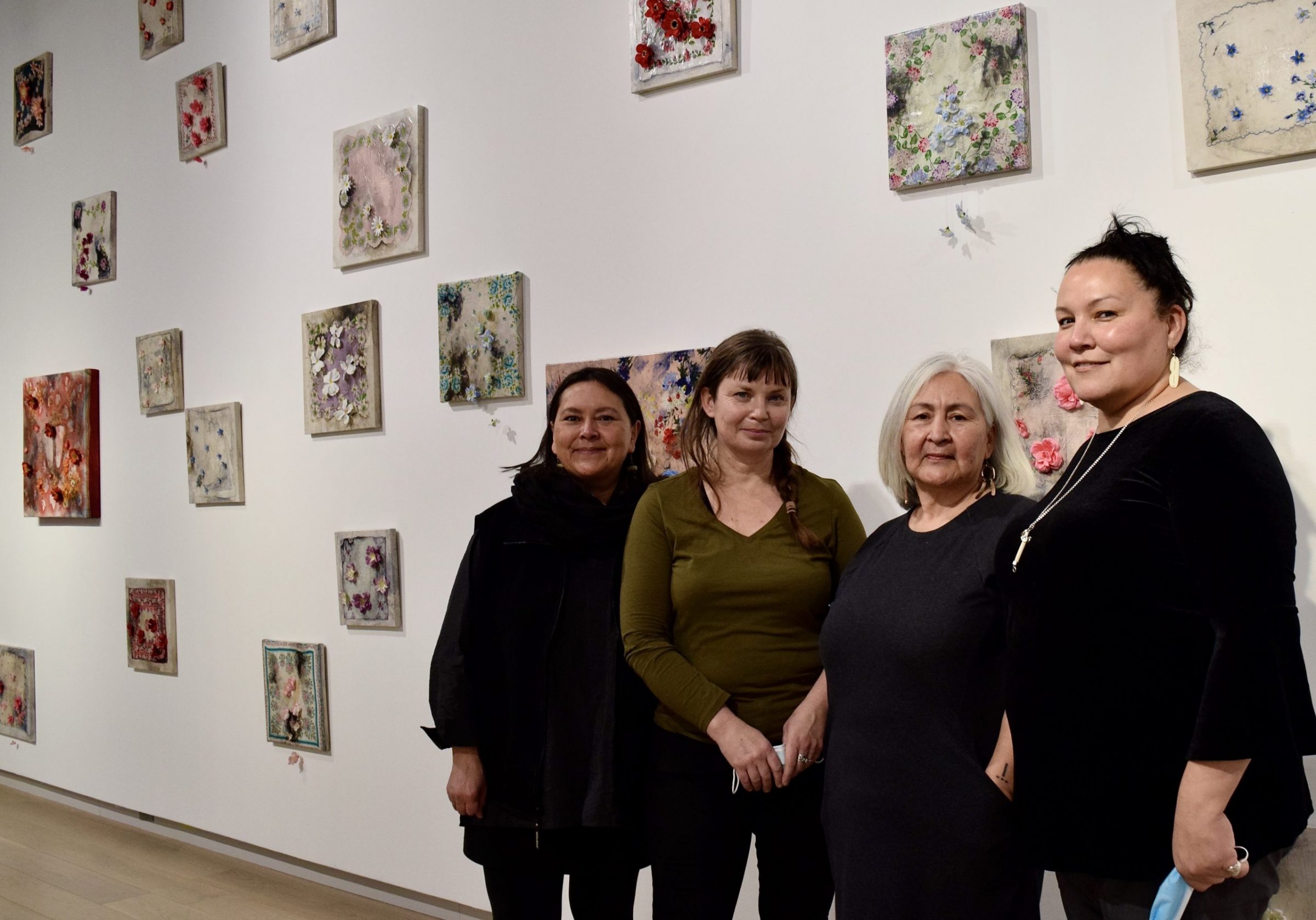 Artists involved with Alakkaajut (Many Things Appear), the inaugural exhibition of SAW Gallery’s Nordic Lab in Ottawa, stand in front of A Million Tears by Sonya Kelliher-Combs of Alaska. From left: Kelliher-Combs, Sissel M. Bergh of Norway, Maureen Gruben of the Northwest Territories, and curator Taqralik Partridge of Nunavik. (Photo by Madalyn Howitt)

Artwork by Indigenous artists from circumpolar countries will make up the first exhibition of a new project at Ottawa’s SAW Gallery.

Three female artists, from the Northwest Territories, Alaska and Norway, will showcase their work in Alakkaajut (Many Things Appear), the inaugural exhibition of the gallery’s new Nordic Lab, a research and production space for artists from circumpolar nations.

Founded in 1973, the SAW Gallery is a non-profit artist-run space dedicated to presenting contemporary art.

A collaboration between SAW and the Canada Council for the Arts, the Nordic Lab is being directed by Taqralik Partridge, an Inuk artist, writer and curator.

Originally from Kuujjuaq, Nunavik, Partridge has also lived in Nunavut and Norway and has worked extensively with northern-based artists from around the world.

“The idea is really to support artists in a long-term way and to work with [them] to promote them… we’re really interested in supporting artists to do new works and to do new collaborations,” Partridge said of the lab’s focus.

The first collaboration resulted in Alakkaajut, a multi-artist exhibition focused on Indigeneity across three circumpolar nations.

Artist Sonya Kelliher-Combs of Anchorage, Alaska, used found and thrifted fabric for her installations that reference the impact of colonialism on intergenerational trauma and resilience.

“I think they have history already embedded within them,” Kelliher-Combs said of the materials — in Small Floral Secrets, old floral-printed bedsheets are shaped into small handheld-sculptures, while scarves and vintage handkerchiefs are preserved in acrylic gel in A Million Tears.

“It’s an interesting metaphor that we physically carry [these items] with us, but emotionally, psychologically, we also carry with us some of these traumas and issues — you need to acknowledge them, address them, bring them forward [to] heal,” she said.

“Big Hello speaks to reaching out to people, but in slow time,” Gruben said. “When you’re beading it’s very slow, it’s not instant.… It takes time.”

Saami artist Sissel M. Bergh hails from Trondheim, Norway, and weaves Indigenous knowledge and traditions into her art, which mixes natural materials like tree cuttings with human-made constructions like rubber and plastic tools.

“I work a lot with trying to change the narrative of history,” Bergh said. Her art attempts to subvert and reclaim accepted notions of truth in her native Norway — the installation Sieidi/Seid draws on how Indigenous Saami narratives are perceived or misrepresented in Norse retellings of history.

“I look at this history production like a spell — you’re creating this kind of story … and it’s perceived as truth,” she said.

Partridge noted how all three artists share common themes across their work, despite the physical space that separates where they originally come from.

“I think there’s a pronounced sense of community and sense of responsibility to community that artists for the North seem to have, [and] a sense of connection to the land and keen understanding of the importance of the environment,” she said.

“I’m really hoping that people can see the connections that run across the circumpolar North, even though it’s so difficult … to travel in between these places because of colonial borders.”

In addition to being a space for artists-in-residence, the Nordic Lab will run educational programs geared primarily towards Indigenous youth. The lab’s Annie Pootoogook Studio, named after the celebrated Inuit artist, will also include digital workstations, screen-printing facilities and printers for photography that students and artists can access.

Partridge said the launch of the Nordic Lab has come at a time when art and activism from circumpolar nations is receiving more attention than ever before.

“Eyes are on the North now because of global warming, because of climate change. More and more people are going to be looking to the North and I think that it’s really important to listen to what artists have already been saying for a long time and will continue to be [saying],” she said.

The Alakkaajut exhibit will officially kickoff Nov. 19 in an evening celebration featuring food and musical performances and will run until March 5.