Data shows results from tests carried out between Oct. 16 and 31 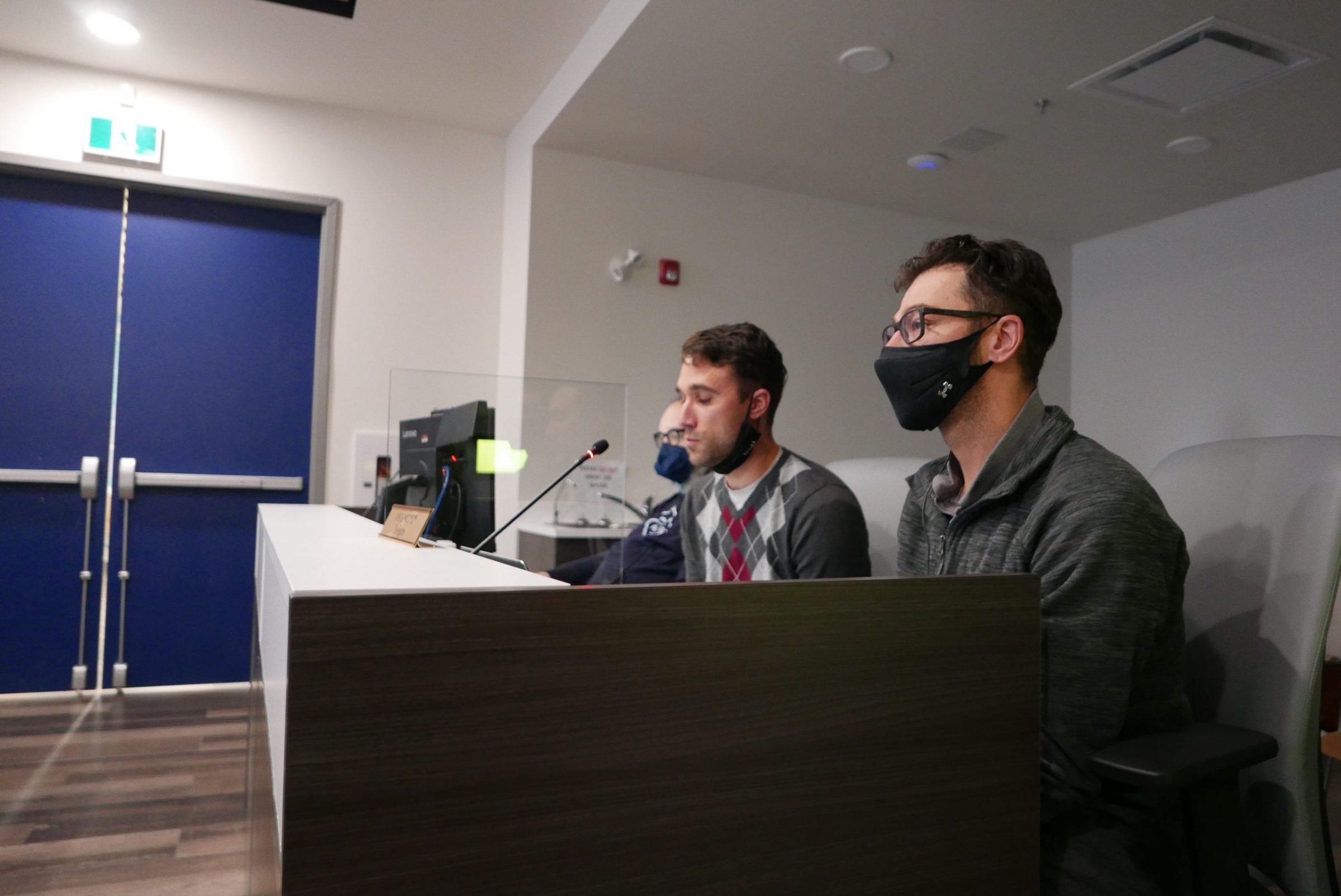 Ian Moran (left) and Charles Goss from WSP: Canada, the consulting firm hired by the City of Iqaluit during the water emergency, present water test results to city council on Monday. (Photo by David Venn)

The City of Iqaluit has released a new set of water test results while residents continue to wait for officials to say it’s safe to drink tap water.

People in the city have been told not to consume city water since Oct. 12, because of fuel contamination in one of the tanks at Iqaluit’s water treatment plant. 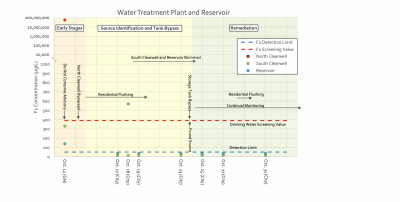 This graph shows levels of fuel contamination in City of Iqaluit’s water between Oct. 12 and 31. While most of the plots on this graph are based on data gathered by the city, the first plot point, on Oct. 12, is based on territorial government testing.

Not included in the raw data are results from Oct. 12, when residents were still drinking the water. But those results do appear on a graph included in Monday’s presentation. The graph shows extremely high concentrations on that day of petroleum hydrocarbons classified as F2, which includes diesel and kerosene, in the water treatment plant’s North Clear well.

The North Clear well was drained and bypassed in mid-October.

Amy Elgersma, the city’s chief administrative officer, said the Oct. 12 results weren’t included with the raw data because it’s based on GN testing.

The territorial government has been doing its own testing, and on Oct. 22 released graphs that show some information about the scope of the fuel contamination.

The GN has yet to release all of its findings and the city doesn’t know when that will happen, said Mayor Kenny Bell.

The city and GN have been sharing data with each other for the investigation, though, and Goss did comment on what he’s seen, in a general sense.

“I don’t think that any of the data that’s been observed by us so far have indicated that there’s going to continue to be a bad situation following the remediation,” Goss said.

Goss and Moran would only comment on the city’s test results, but the data tells a “good news story,” said Bell.

The data is broken down by the location the sample was taken from, the contaminant tested for, and date. Results came back non-detectable for xylene, ethylbenzene, lubricants and oils, gasoline and solvents and heavy oils.

Diesel and kerosene were detectable four times in four different locations between Oct. 16 and 31, the highest amount being 570 ug/l in the city’s treated water reservoir, which exceeds the Canadian drinking water guidelines by about 46 per cent.

Coun. Kyle Sheppard pointed out the size of one microgram, or ug/l, in comparison to a litre of water.

Goss and Moran explained fuel doesn’t mix well with water, and stayed at the top of the holding tanks, while water is drawn from the bottom of the tanks.

“This prevents most petroleum hydrocarbons from entering the distribution system,” Goss said.

He explained the water likely hadn’t been contaminated for long, because people can smell the hydrocarbons at “incredibly low” concentrations.

But everybody has different levels of sensitivity to these chemicals, which explains why reports to the city were so random and sporadic, said Goss.

All told, the city has spent $1.5 million so far to investigate and clean up the fuel contamination, as well as on water distribution, and there still is no timeline for when people will be able to turn on their taps again for a glass of water.

The city needs to complete a set of requirements set out by the territorial government before the GN will lift the advisory.

Council approved another $100,000 Monday night to install a bypass system within the water treatment plant that will allow water to skip its two underground holding tanks.

Officials have also installed a real-time online water monitoring system that is able to detect hydrocarbons at extremely low levels of contamination.

As well, WSP Canada is working an emergency response plan and upgrades to the water system to prevent contamination from entering, Moran said.

Already completed is the first phase of remediation, which involved removing contaminated water in the tanks and groundwater surrounding the treatment facility, Elgersma said.

The second phase, removing the source of the contamination, which is most likely from an underground fuel tank that dates back to 1962, is underway.