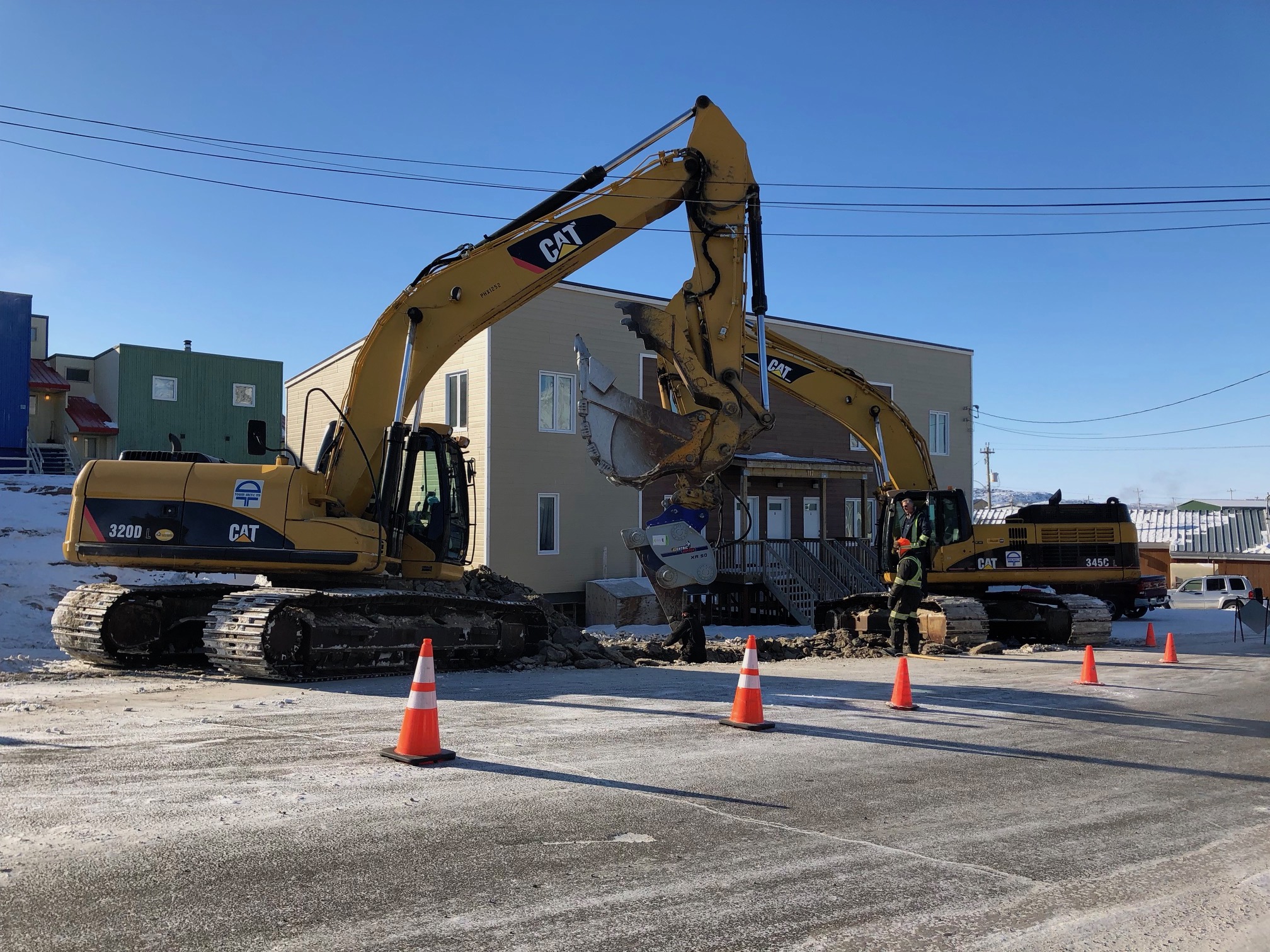 Blame it on climate change and Iqaluit’s spotty development in the past: heavy machinery digs through hard ground in Iqaluit to get to a frozen connection in the piped-water delivery and sewage collection system. The fix is now expensive and time-consuming. (Photo by Jane George)

The City of Iqaluit says that climate change is partly to blame for growing problems with its aging water and sewer system, and it wants the federal government to throw a lot of money at the problem.

How much? Try upwards of $250 million, according to estimates contained in city documents.

For a full replacement, $55.2 million would go to the piped water system, $58.2 million to the sewage collection system and $106.3 million to roads.

Parts of the piped water and sewage collection system date back to the 1960s.

That support would ideally see the city receive some of the federal government’s $2-billion fund earmarked to deal with climate change, Redfern said.

If that seems like a lot of money to spend in a city of about 8,000, consider that City of Iqaluit has recently spent more than $330,000 over two and a half weeks on thawing frozen residential water pipes.

The city says that buried water pipes are now freezing more frequently, in part due to the deepening of the active layer in zones of continuous permafrost.

The active layer is the top layer of soil that thaws during the summer and freezes again during the autumn.

As the active layer spreads, pipes that once used to be held in place by permafrost are now shifting, usually at the connection points leading to the surface.

This can cause pipes to break or disconnect. Those breaks may not become evident until the winter months, when the reduced flow of water or sewage causes these pipes to freeze up.

Runoff is also an issue, as water accumulates beneath sewer pipes, leading to a gradual buildup of ice that can eventually crush a pipe from the bottom up.

Having to break through frozen ground to repair these pipes “greatly increases the length of time and difficulty in correcting the issues,” according to city documents.

Between Feb. 24 and March 13, the City of Iqaluit was notified of 29 locations where service lines were frozen. Some of them had lacked water for a week or more. The building that houses two apartments and the Nunatsiaq News office has been without running water since the first week of March. 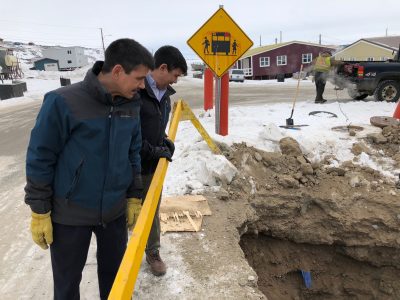 John and James Paton look into the deep hole that lies opposite their Iqaluit home. They haven’t had water in their house since March 5. To cope, they have had to bring in water and take showers elsewhere. It’s been hard, they say. But on March 15, as they looked into the deep hole excavators had dug out, they could finally see the water pipe, so they felt hopeful that soon it could be thawed out and they would see some water flowing from their taps. (Photo by Jane George)

Iqaluit is also bracing for the possibility of future water shortages—a problem that’s been compounded in the past by leaky water pipes.

Meanwhile, the storm-water drainage system is no longer able to support increased precipitation brought by climate change. For this, the city wants money for a study to prepare a proper drainage system.

Iqaluit’s ongoing problems with buried pipes are also a product, in part, of how Iqaluit grew: “development has been sporadic, too oft inadequately researched, underfunded, poorly planned and implemented, usually by using southern materials and southern method—rarely looking to other Arctic nations to learn from their best practices,” the city documents said.

To help cope in the short term, the City of Iqaluit plans to create new development charges that would fund the replacement of an old sewage line that’s currently at capacity and is to blame for some messy spills in the past, including one last summer that flooded a home with several inches of sewage.