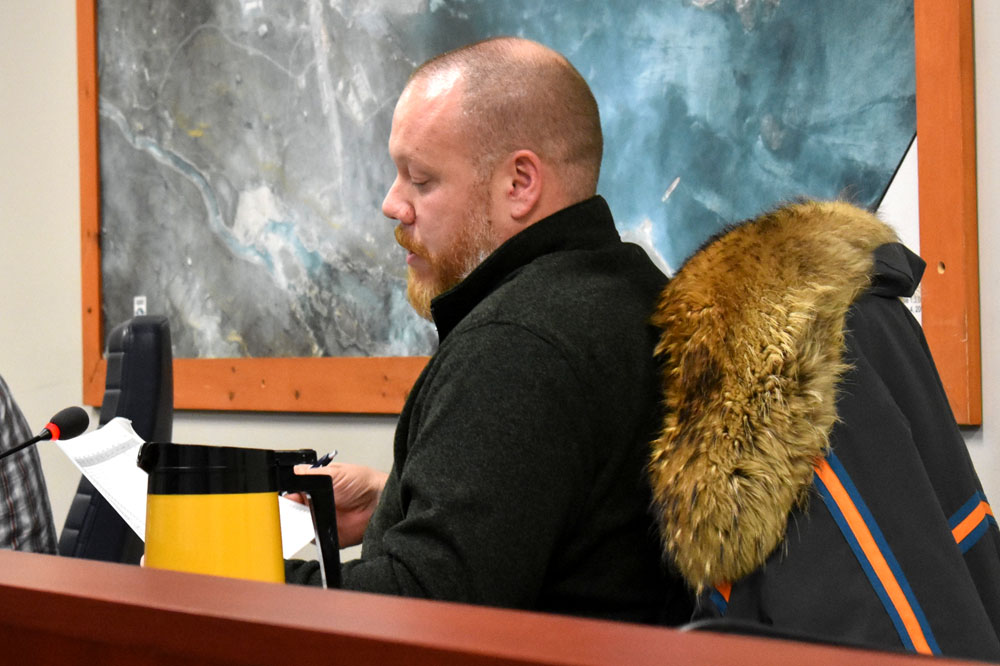 Coun. Kyle Sheppard, chair of Iqaluit city council’s finance commitee, reads out the details of the 2019 city operating budget and capital spending plan. Important changes include increases to sanitation rates and property taxes, and a reduction in the water subsidy. (PHOTO BY COURTNEY EDGAR)

Ratepayers will see a five per cent increase in their property taxes. That’s one of the largest sources of revenue going into the city’s general fund.

“City hall itself is in a state of disrepair, and the fire hall has outgrown its space,” said Kyle Sheppard, the chair of the finance committee.

Residential users will pay higher sanitation rates of about $12 a month to cover the cost of garbage services.

The purpose of that is to bring the fund out of deficit, as required by the Cities, Towns and Villages Act, and to improve service, Sheppard said.

“At the council priorities workshop, we all agreed that the state of sanitation is one of our biggest priorities in relation to services provided by the city. Flying garbage and cardboard has increased significantly, and the resources to respond to the demand have remained relatively static,” Sheppard said.

Also included in the new budget is a gradual decrease in the residential water subsidy rate.

That subsidy right now is equivalent to 0.013 cents per litre, but will go down to zero within three years, the city said in a revised press release.

But once that subsidy is eliminated, a GN subsidy of $1.3 million a year will be re-invested in water infrastructure.

“Since 2016, the city has been subsidizing residential sewer and water rates in excess of funding received from the Government of Nunavut. The subsidy in place has assisted in causing the water and sewer fund to have a significant deficit,” Sheppard said.

The city aims to continue its work upgrading water infrastructure while planning for a long-term supplementary water source, said a news release issued Tuesday night after the budget’s approval.

The city fixed 45 leaking pipes around the city this year in a bid to save water.

In July, the city said that about 40 per cent of water from Lake Geraldine was lost to bleeds and breaks in its aging infrastructure, but later said the losses are likely lower due to the method of calculation.

Infrastructure funding must be used for infrastructure and not applied incorrectly as a user subsidy, as it is now, Sheppard said.

Unionized city workers will see a 2.5 per cent wage increase in accordance with their collective agreement.

The city also will face a 3.3 per cent increase in power costs and a 15-cent-per-litre increase in heating fuel costs.

The city’s aging infrastructure, including the utilidor system, needs repair and maintenance.

Also, the IT systems the city uses are outdated, which “puts the city at risk,” said Sheppard.

He told city council that the cost of replacing the IT system is estimated at $500,000.

“It’s important that we have long-term plans to place funds in the reserve each year for future needs,” Sheppard said.

“The only way to accomplish this is by making sure to have rates that cover the costs of services we are expected to provide.”

Due to a typo in the original City of Iqaluit news release, the first version of this story contained incorrect information about how the existing water rate subsidy works. We have received fresh information from the city.