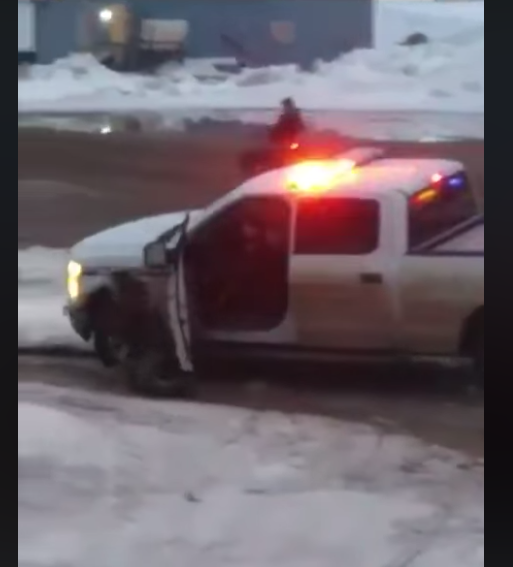 The Civilian Review and Complaints Commission for the RCMP has launched an investigation into the conduct of the Kinngait RCMP during a violent arrest caught on video on June 1, pictured here. (Screenshot)

The conduct of the Kinngait RCMP during a violent arrest captured on video is now under investigation by the force’s Civilian Review and Complaints Commission.

A video that circulated online on June 1 showed a Kinngait RCMP officer knocking down a 22-year-old man with the door of his truck before arresting him.

The man in the video was placed in the Kinngait detachment’s cells where he was allegedly beaten so severely by his cellmate that he was airlifted to Iqaluit for medical attention.

In a news release issued today, the commission said it has “initiated a complaint into the conduct of RCMP members involved in an incident in Kinngait (formerly known as Cape Dorset), Nunavut, on the evening of June 1, 2020.”

The CRCC is an independent agency that reviews complaints made by the public about on-duty RCMP members. The commission’s chairperson can also launch complaints if the chairperson “believes there are reasonable grounds to investigate.”

“I am concerned with the conduct of RCMP members involved in this serious incident and will monitor both the OPS investigation and the RCMP’s Code of Conduct investigation,” Michelaine Lahaie, the CRCC’s chairperson, said in the release.

“The CRCC’s investigation will provide an added level of scrutiny to the incident, as it will additionally examine the circumstances that led to the man being placed in a cell at the RCMP detachment where another detainee assaulted him and he needed to be airlifted to Iqaluit for treatment. I am aware that there is historical distrust by Inuit toward the police and I am committed to increasing RCMP accountability.”

The officer who knocked down the man was removed from the community and placed on administrative duties following the incident.

Since Jan. 1, there have been six incidents in the territory where the Ottawa Police Service has been called in to investigate. Three of those incidents were police-involved shootings, two of them fatal.

In a statement following the June 1 incident, Jeannie Ehaloak, Nunavut’s justice minister, said she had notified the CRCC and would “formally request a review.”

The CRCC’s investigation will specifically address:

“The RCMP members’ conduct will be assessed in accordance with relevant law and RCMP policy. Consideration will also be given as to whether racial bias and/or discrimination played a role in the man’s arrest and subsequent treatment,” the release said.

The man in the June 1 video told Nunatsiaq News in June, “I want to find those police and charge them.”

In an email, the CRCC said it would not be taking interviews from media at this time, but estimates the investigation will be complete within one year.

Once the CRCC’s investigation is complete, an interim report outlining findings and recommendations will be sent to the federal public safety minister, Bill Blair, and RCMP Commissioner, Brenda Lucki.

The RCMP commissioner then has six months to provide a response and identify what actions will be taken.

If no actions are taken, the commissioner will have to provide reasons why.

A final report that includes the RCMP commissioner’s response will then be issued by the CRCC and the investigation process will be complete.

In an email, a spokesperson for Blair said the minister was aware the CRCC had launched a complaint and investigation and that “the RCMP will cooperate fully.”

“We continue to work with experts, impacted communities and individuals with lived experience of racism and discrimination to ensure our agencies serve without bias, and with a commitment to justice for everyone. We are supporting calls for the adoption of body-worn cameras to increase transparency and accountability for interactions with RCMP officers, and Minister Blair is currently reviewing ways to modernize policing structures and updating standards regarding the use of force,” the spokesperson said.

“Everyone deserves to feel safe, and Inuit communities are no exception. A professional police force that works to represent and protect everyone equally is a critical component of ensuring this.”

When asked for comment, Amanda Jones, chief superintendent of the Nunavut RCMP, said, “We welcome the CRCC’s review of the matters related to the incident in Kinngait on June 1, 2020.  We will assist and support them in any way in their review.”

Additional information from the federal public safety minister was received after this story was first published and now has been added.