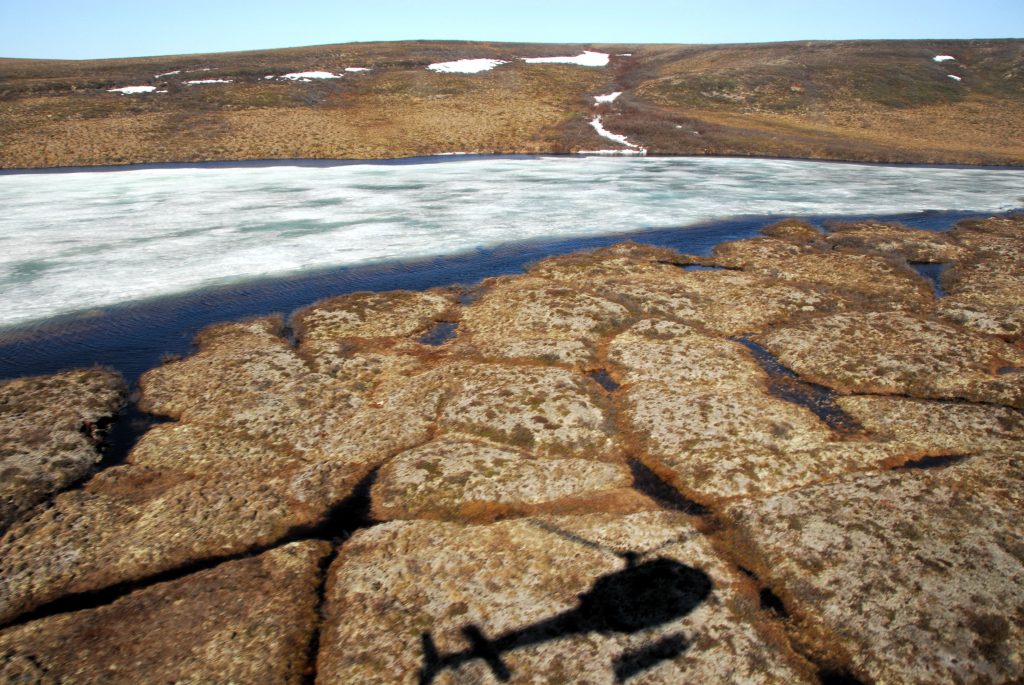 Some lakes in the Arctic are expanding and others are disappearing as permafrost thaws. This lake north of Inuvik, N.W.T., is expanding as the ice wedges (darker lines leading away from the lake) around this lake melt and the ground subsides. (Photo by Philip Marsh)

Lakes, ponds and streams cover a large fraction of the low-lying tundra that circles the Arctic. For example, roughly 65,000 lakes and ponds lie within the Mackenzie Delta and an area to its east.

Lakes across this terrain often exist because of the impermeable nature of the permafrost around and below these lakes. Some of this permafrost has existed here since the last ice age.

Yet as the climate warms, this permafrost is at risk of thawing for the first time in tens of thousands of years. Permafrost thaw has already caused some of these lakes to drain and dry up, and others to expand. Dramatic changes over the last 70 years have been well-documented through air photos and satellite images.

These lakes are linked by a vast network of rivers and streams, and are important habitat for large populations of migratory birds, fish and mammals. They are also vital to the lives of northerners, who use them for hunting, fishing, trapping, transportation, fresh water and recreation.

With increasing evidence of ecosystem destruction around the world related to the changing climate, there is also increasing concern that unique Arctic freshwater ecosystems are under threat.

Lakes controlled by the presence of permafrost can drain rapidly if the permafrost gives way, a process called catastrophic lake drainage. Sometimes an entire lake can drain in as little as a day, like the one that we studied after it vanished from the landscape north of Inuvik, N.W.T., in 16 hours in August 1989. 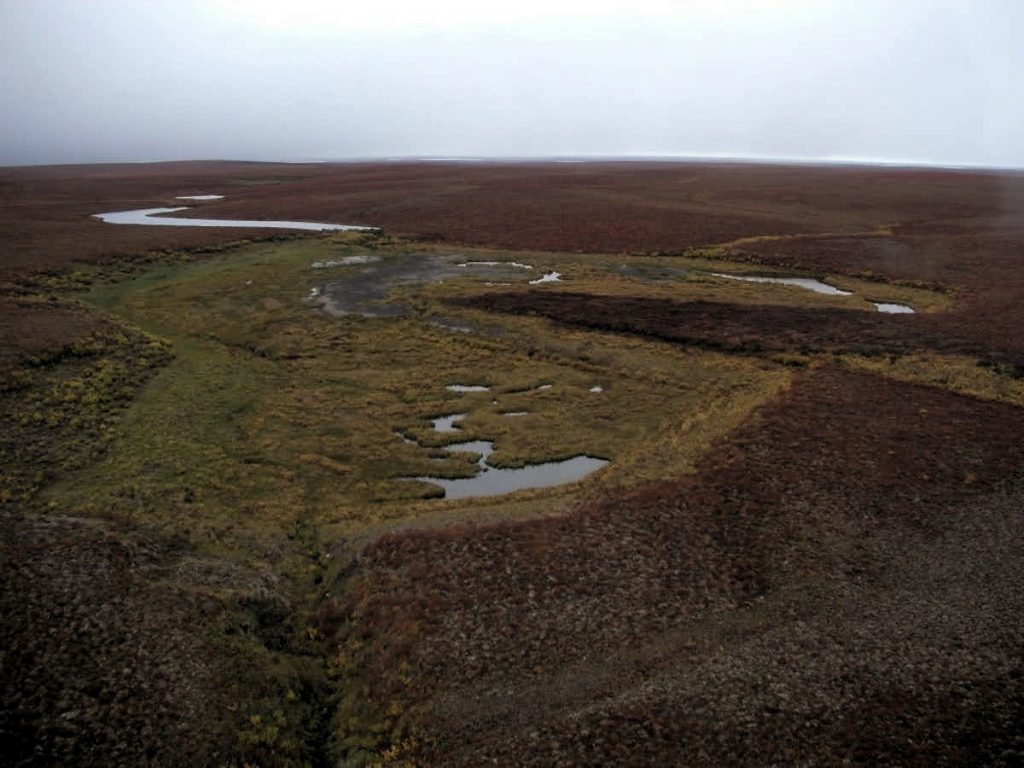 A drained lake basin, with shrubs turning yellow in the fall. This lake in the Trail Valley Creek watershed north of Inuvik, N.W.T., drained in August 1989. (Photo by Philip Marsh)

The disappearance of this lake occurred as water seeped through cracks that had formed in ice wedges during the previous winter. The relatively warm lake water melted the ice within the permafrost, creating a new outlet channel.

Lake drainage presents a serious safety risk to hunters or fishers who may be downstream. It also destroys freshwater habitat, quickly converting it to land, and expands, or even forms, new stream channels.

Like many impacts of climate change on the Arctic, however, unexpected changes also occur. After our initial studies of draining lakes, we expected to find the number of lakes draining annually across this region would increase as the climate warmed.

Instead, we found lake drainage in this area had decreased by one-third between 1950 and 2000. This decrease is likely due to fewer extremely cold winter days that are needed for ice wedge cracking to occur over the winter. 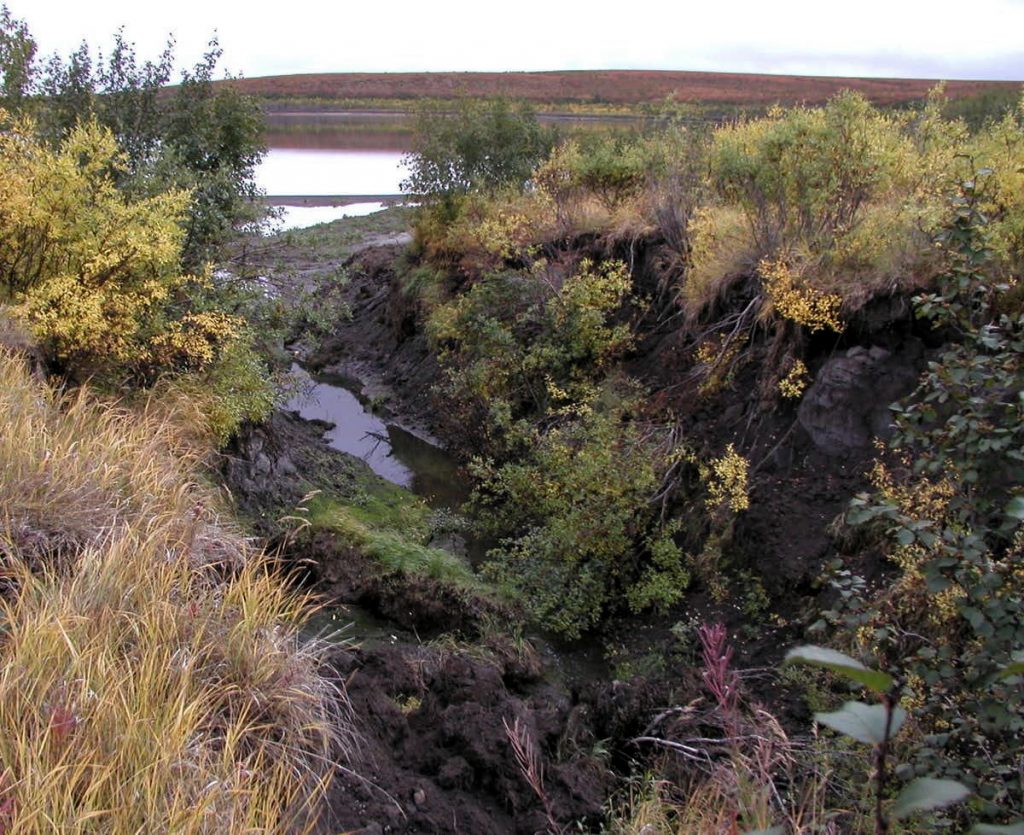 A stream channel enlarged by a rapid, partial drainage of the lake in the background after ice-rich permafrost thawed. (Photo by Philip Marsh)

Yet as warming continues, the upper layer of the soil that thaws each year is expected to get deeper and will likely lead to more lake drainage events. An increase in lake drainage has already been reported in Siberia, and this is likely the long-term future of many Arctic lowland lakes.

Other lowland lakes are expanding as ice in the lake shoreline melts. New lakes may also appear in the tundra depressions that form as ice-rich permafrost thaws, creating new aquatic habitat. Changes like this have been seen in Siberia, but they haven’t been observed in the Inuvik region yet.

This thawing of ice-rich permafrost, called thermokarst, results in changes in water chemistry and increases in water clarity. These changes will likely affect aquatic food webs in ways that are still poorly understood. 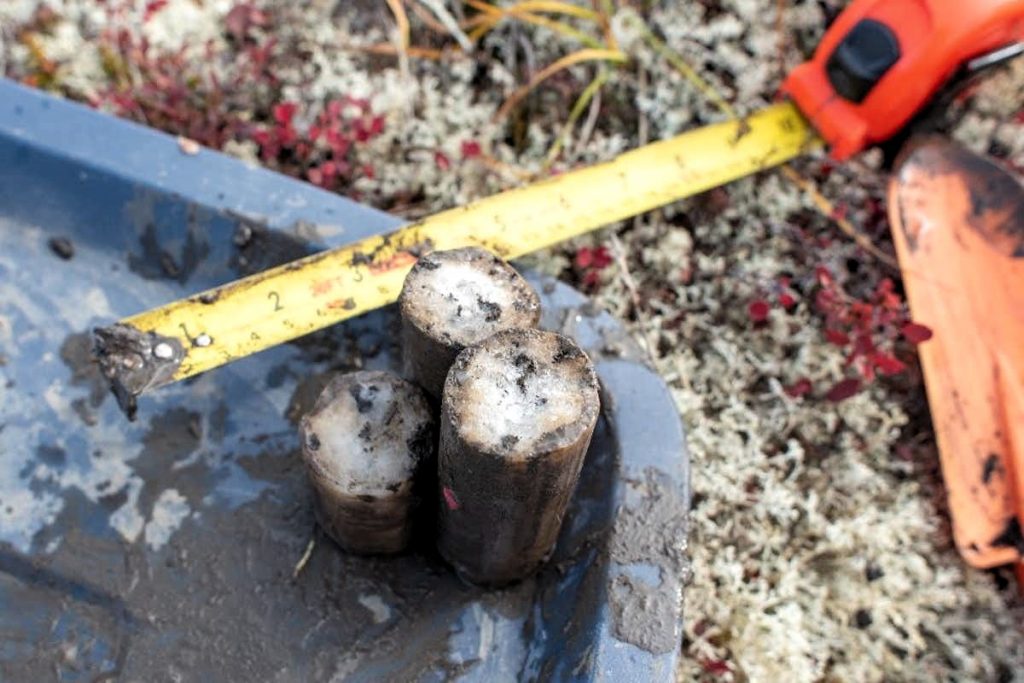 Three core sections from the upper metre of permafrost at a site north of Inuvik, N.W.T. White material is ice embedded in the permafrost. (Photo by Niels Weiss)

The Arctic is warming at two to three times the rate of the global average. But determining where the permafrost will thaw — in what way and how quickly — is a complicated puzzle affected by many factors.

For example, there are an increasing number of shrubs growing on the tundra. This affects the accumulation of blowing snow, and may speed up or slow down the rate of snow melt and shorten or lengthen the number of snow-free days. All of this affects permafrost thaw and freshwater systems.

Millennia of change ahead

Scientific organizations, governments and international groups around the world have all recently warned of the alarming impacts climate change is having — and will have — on the Arctic. Thawing permafrost is already destabilizing buildings, roads and airstrips, eroding coastlines and releasing more carbon into the atmosphere.

It is critically important to realize that permafrost thaw will not stop once the global climate has stabilized, whether at the Paris Agreement limits of 1.5C or 2C, or at much higher levels.

Even if anthropogenic carbon emissions are reduced over the coming decades, the concentration of carbon dioxide in the atmosphere will remain above pre-industrial levels for centuries — and likely millennia. Temperatures will also remain high.

As long as the global average temperature stays above the pre-industrial average, permafrost will continue to thaw, ground ice will melt, the land will subside, lakes and streams and freshwater ecosystems will change dramatically, with devastating effects on the peoples of the Arctic who have used these freshwater systems for generations.

Over the next year, governments will make decisions that will limit the increase in global temperature to below 1.5C or allow global warming to further increase to 2C or more. Our decisions will impact the Arctic and the globe for generations.

[ Deep knowledge, daily. Sign up for The Conversation’s newsletter. ]