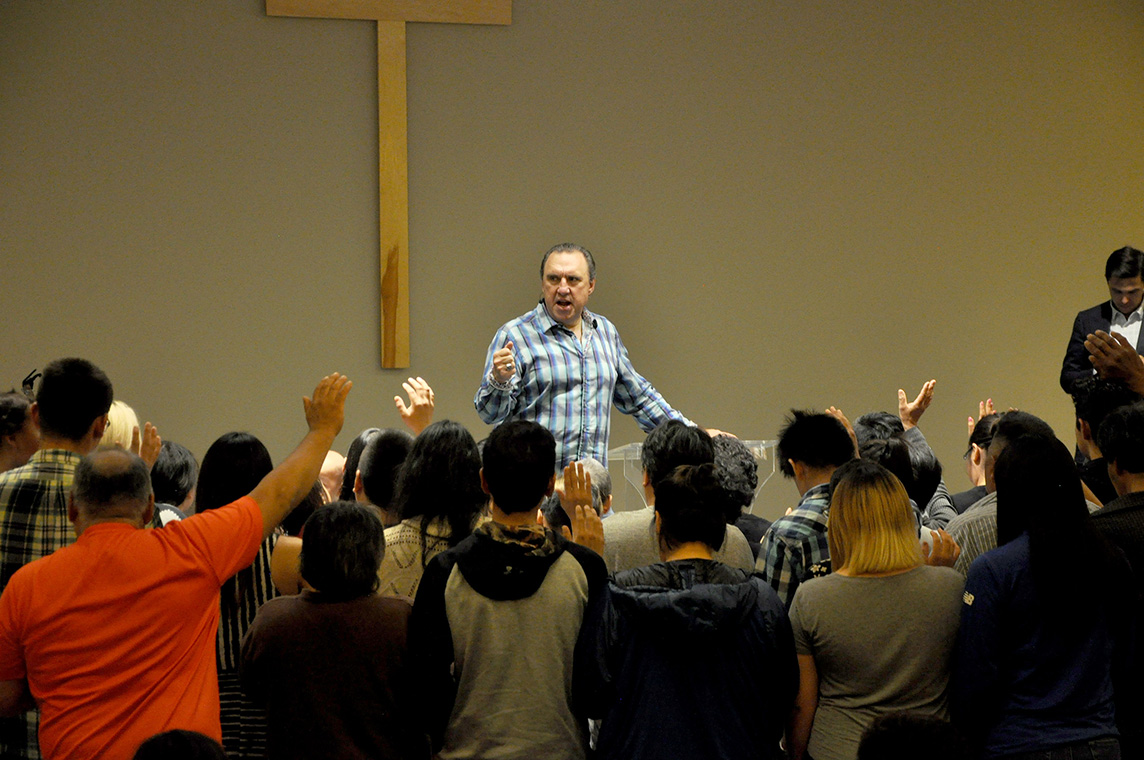 Rodney Howard-Browne, an evangelical pastor from Florida, preaches in Iqaluit on Aug. 27. (Photo by Thomas Rohner)

A fundamentalist Christian evangelist known for conspiracy theories, climate change denial and marketing schemes brought his crusade to rid the world of the Antichrist to an Iqaluit church on Aug. 27.

Rodney Howard-Browne, a South African immigrant to the United States, told his congregation near Tampa Bay last year that those who rule the world worship Lucifer and drink the blood of human sacrifices.

He preached for over an hour at an Iqaluit church to more than 100 people.

But his message is not for everyone.

“The whole of the Arctic depends on what is happening here tonight. So if you want the fire [of the holy ghost], stand here [by the altar], otherwise you can leave. The choice is yours,” Howard-Browne said at the end of the 2.5-hour event. About 50 people crowded the altar.

The mostly Inuit audience included infants, youth and elders. Inside the Christian Fellowship church in Iqaluit’s Road to Nowhere neighbourhood, kids ran around and played between the rows of folding chairs. Outside, the church and mosque faced each other across a small parking lot, both overlooking Dead Dog Lake.

Howard-Browne’s sermon was part of an event organized by the Bill Prankard Evangelistic Association’s Arctic Hope Project, which is based in Ottawa. The association did not respond by Nunatsiaq News’ deadline to a request for comment.

The evangelist’s performance, number 119 on a tour of 300 one-night city stops he plans, began about one hour into the event.

Eric Gonyon, an associate pastor with Howard-Browne’s Revival Ministries International, then held a 40-minute promotional session for his boss. 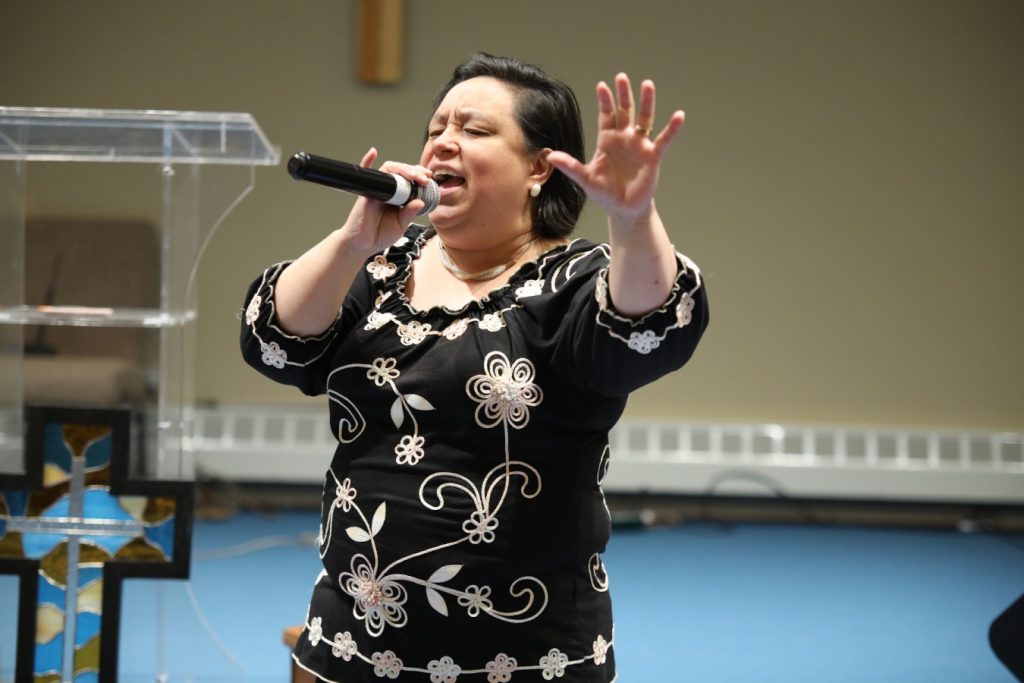 Gonyon asked the audience to provide their email address on registration cards and to follow Howard-Browne on Instagram. He gave out gift cards for Howard-Browne’s religious products. And he plugged Howard-Browne’s upcoming book, Killing the Planet, which he said follows the history of corrupt economic institutions over the past 200 years.

“It’s really the spirit of the Antichrist, is what it comes down to,” Gonyon said.

Gonyon then played an 18-minute promotional video of Howard-Browne’s evangelical career. Towards the end of the video, Howard-Browne prayed that those who donate money to his ministry will get credit before God for the souls his ministry saves.

“God loves a generous giver,” Howard-Browne said in the video.

Gonyon praised his boss when the video ended.

“One sows and one reaps and together we rejoice in the harvest, so that if you sow into this, whatever comes into this ministry’s account actually goes into your account. It’s really amazing.”

He then handed out offering envelopes and challenged people to do their “best gift for souls,” by either cash, cheque made out to RMI Canada, credit card or via smartphone.

“I always tell people, don’t let the biggest cheque you ever wrote be for a Sea-Doo or a new phone … let it be to revive the church and win souls. Amen?”

Many people filled and sealed the envelopes and put them into blue plastic beach buckets passed around. Some looked at others and held the envelopes in their hands. One Inuk woman folded the empty envelope and put it in her purse.

The call for donations comes in a city where poverty is widespread: Nearly half of Nunavut’s population relies on social assistance amidst long-standing crises in food security and housing.

Howard-Browne did not respond to an interview request from Nunatsiaq News, so how much money was raised is unknown. His net worth has been a closely kept secret but his website says he provides training sessions in 158 countries. It also says people who enrol in his Aircraft Donation Program will receive tax breaks.

Gonyon told the audience to hold their offerings to Revival Ministries up in their hands.

“Father, we just thank you for this offering, and we thank you for representing souls, that whatever comes into our account goes to their account,” Gonyon said. Three one-foot-tall buckets of envelopes were collected. 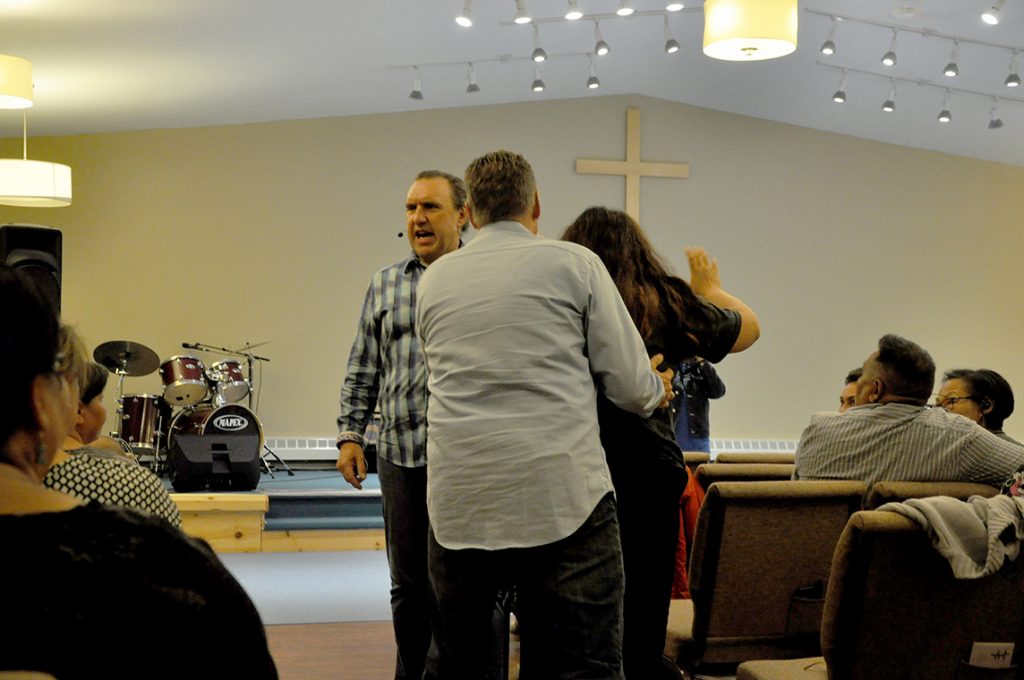 Rodney Howard-Browne preaches over a woman who he is about to lay hands on. (Photo by Thomas Rohner)

Fundamentalist Christian evangelism already has deep roots in Nunavut, with followers in almost every community. Bible conferences take place annually and, at least into the mid-2000s, were drawing bigger and bigger crowds. One advocate and organizer of such conferences, Roger Armbruster, told Nunatsiaq News in 2004 that the conferences are powerful magnets for those whose lives have been torn apart by abuse and addictions.

But Howard-Browne’s brand of capitalist and aggressive fundamental evangelism may be new to the territory.

Patterk Netser, a long-time defender of fundamentalist Christianity and current Nunavut minister of housing and Arctic College, is what Howard-Browne calls one of his “Eskimo friends” who tell him climate change is a hoax.

Netser declined an interview request by Nunatsiaq News but said, “Rodney is a friend of mine and we connect regularly.”

When asked to respond to Howard-Browne’s many run-ins with the media, which includes saying a U.S. Supreme Court Justice should be shot for insulting the American Constitution, Netser said, “What goes on in the States is none of my business. My primary concerns are for my people and Nunavummiut.” 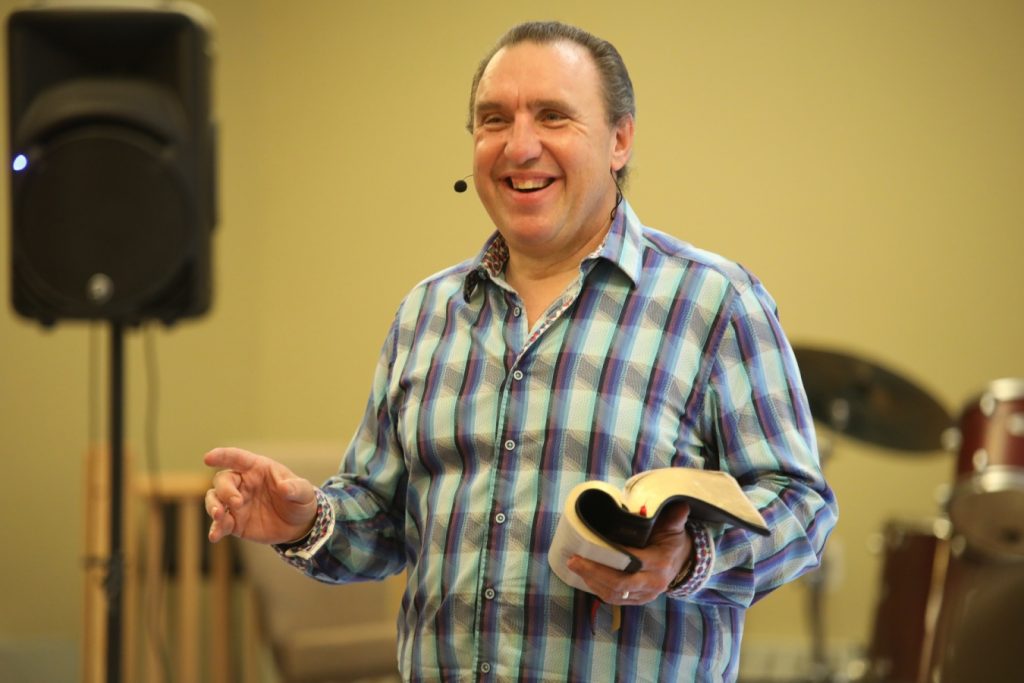 “Tonight will be fire on ice”

One hour into the event, Howard-Browne—the main act—took to the altar.

“Tonight will be fire on ice,” the evangelist said to over 100 people, mostly Inuit, of all ages.

“If you don’t want the fire, you better make a run for the door now while you can.”

Over the next hour, Howard-Browne’s voice rose and fell rhythmically. He paused for effect and shouted for emphasis at times. And he told jokes.

“I know I don’t look like I’m African, but it’s only because my parents kept me in the house most of the time, they never let me outside,” he said to scattered laughter.

Howard-Browne rose to fame, in large part, for his laughing revival meetings where worshippers were seized with laughter for minutes at a time. His granddaughter was visited by the Holy Ghost when she was two years old, laughing for 12 minutes straight, Howard-Browne said.

Howard-Browne has been criticized by many in the international evangelical community. He has been called a false teacher who substitutes Christian teachings with frenzied laughter and hysterical emotionalism. Howard-Browne has responded to that criticism by saying those who insult him are insulting the Holy Ghost and are therefore bound for hell.

Arreak, the Iqaluit evangelist and singer who helped open the event, was the only member of the audience to be gripped by laughter during the sermon.

“This is not a funeral, why are people sad?” Howard-Browne said. Arreak laughed.

“We are serving Jesus and he is alive.”

“I like this pastor,” he said to Arreak, whose sustained laughter grew even louder. Howard-Browne laughed with her as others in the audience laughed softly.

“Such joy. With joy shall you draw forth water, out of the wells of salvation.”

Arreak’s laughter hit a shrill pitch and echoed off the ceiling.

“This is legal. Nobody’s going to be arrested tonight.”

Arreak, who told Nunatsiaq News she refused to speak to media, whooped with more laughter.

Howard-Browne also spoke in tongues, which he claimed was once understood in the obscure native dialect of a Papua New Guinea pastor. 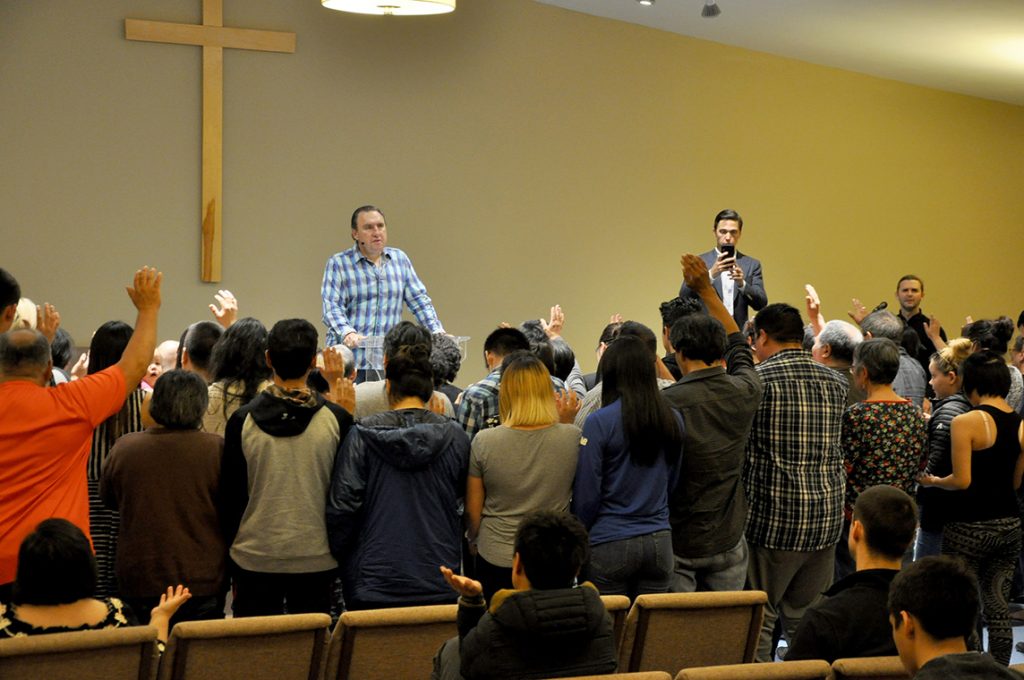 Rodney Howard-Browne calls the audience around the altar to receive the fire of the Holy Ghost. (Photo by Thomas Rohner)

But not everyone found Howard-Browne’s sermon captivating or funny.

He lashed out at those who tried to leave before the end of his sermon. Before he lay hands on a few audience members, Howard-Browne harangued two people as they left.

“Where are you going brother? Hey. Hey! You leaving?” Howard-Browne said to one man as he quietly left the church. “You come in here, you were filming with your phone and then you leave? Are you the reporter for the daily newspaper here?” The audience laughed.

“I wonder what he would do if I would run and grab him and bring him back in…. Find out who he is and why he’s filming and why he left,” he said to one of his staff.

As he called the audience to the altar at the end of his sermon, Howard-Browne seized on two women sitting in the second row because he didn’t like the looks on their faces.

“Are you guys born again? What are you, Jehovah Witnesses?” The audience laughed. “I’ve never seen people so indifferent sitting in the second row. So you can either jump in with the rest, or you may be better than everybody else.” The two women stood up and began walking out of the church. “I’m just asking a question. I do this, you know, this is my job. I know what body language is. Don’t scoff at me. It’s not a joke. The whole of the Arctic depends on what is happening here tonight.”

Event staff told the audience not to take pictures or recordings. Meanwhile, they photographed the entire event. That included running up to people who were sobbing as Howard-Browne laid hands on them and taking close-up pictures. A photo album on Revival Ministries International’s website shows pictures of nameless audience members at their most vulnerable—pained facial expressions, eyes closed, mouths wide open, or collapsing to the floor. 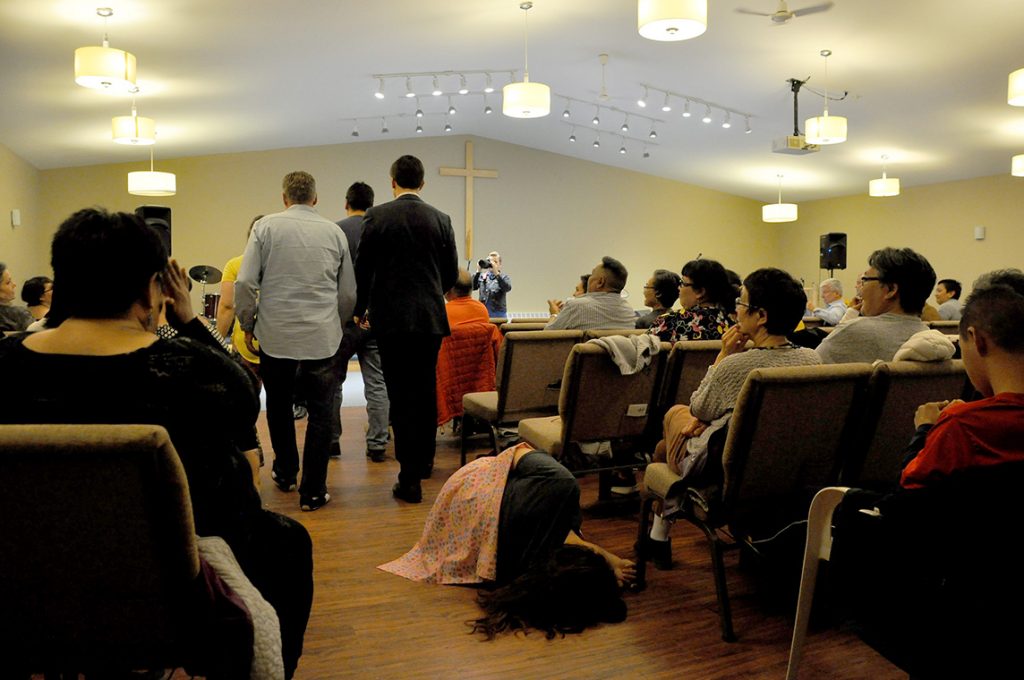 A woman on whom Howard-Browne just laid hands lies crying on the floor beneath a thin blanket. In front of her, Howard-Browne and his staff advance to lay hands on an Inuit couple. (Photo by Thomas Rohner)

The event was originally scheduled to be held at St. Jude’s Anglican Cathedral in Iqaluit, but was changed at the last minute.

That change came from those who invited Howard-Browne, a receptionist at St. Jude’s said.

David Parsons, the Anglican bishop for the Arctic, said he was not aware that Howard-Browne was set to preach at St. Jude’s. And if he had known, he said he would have stopped the event because Howard-Browne is an extremist. In this case, local Anglican officials failed to follow protocol by getting the bishop’s approval before such an event, Parsons said.

The Anglican church has a reputation as a caring, compassionate church and, at times, works closely with other denominations, Parsons said.

“But there’s a lot of trust there, that you’re not going to be doing things that would, first of all discredit Christianity or the ministry of the people who are there.”

“I’m not here to appease religious people. If religion was going to shake the Arctic, it would’ve shaken the Arctic,” he told the audience.

“I don’t go by invitation, I go by commandment.… When you have the fire, you don’t need an invitation.”