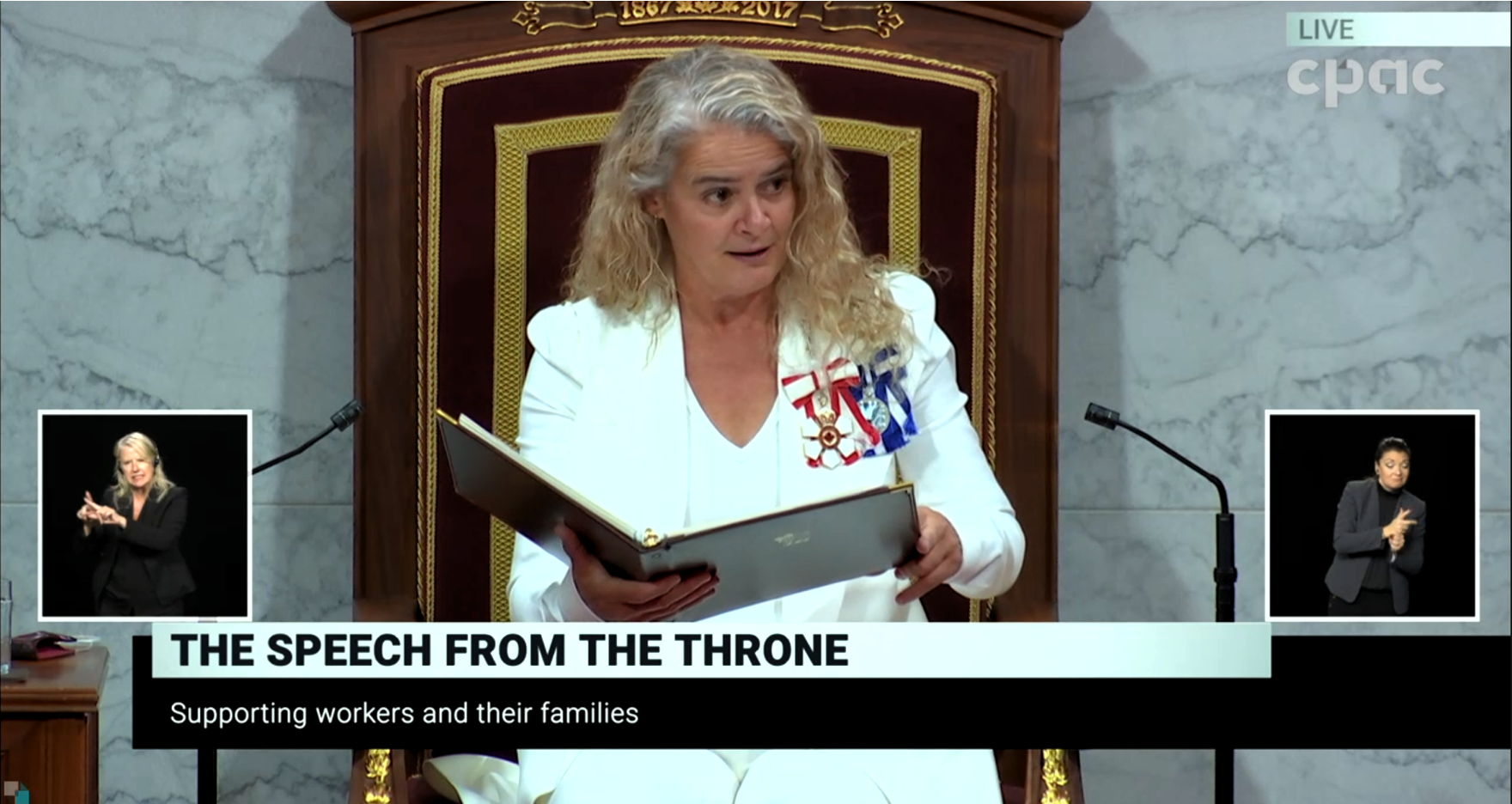 In its throne speech yesterday, Prime Minister Justin Trudeau’s government promised to create a million jobs, start a national child-care program, and continue protecting Canadians from the devastating social and economic impacts of the COVID-19 pandemic.

Delivered inside the Senate chamber by Governor General Julie Payette, the highly anticipated speech laid out the federal government’s agenda for the new session of the House of Commons that started this week, following the prorogation of the previous session on Aug. 18.

The 34-page speech, which took Payette about an hour to read, contains a multitude of promises, including expensive commitments in the areas of health care, child care, job creation and the protection of vulnerable workers.

But the Liberal government’s top priority—the first “foundation” of their new plan—is still the COVID-19 pandemic, following a dramatic resurgence of infection rates this month, especially in Ontario, Quebec, Alberta and British Columbia.

That has pushed national infection rates to levels not seen since the worst days of the pandemic last April, prompting Trudeau, in a televised address to the nation yesterday evening, to declare the pandemic’s much-feared second wave is now upon us.

“We’re on the brink of a fall that could be much worse than the spring,” Trudeau said.

Trudeau used most of his early evening speech to promote the content of the throne speech and to heap praise upon himself and his Liberal government.

He suggested only his government’s policies can save the country from the scourge of COVID-19 and protect workers and small business people who have been hammered by public health lockdown measures aimed at reducing coronavirus infections.

At the same time, climate change and Indigenous issues got a lower priority, and were mostly buried near the end of the speech.

CERB to be morphed into new EI

Also, the future of the Canada Emergency Response Benefit, or CERB, is still shrouded in uncertainty.

Since last March, the CERB program has made payments of $2,000 a month to nearly nine million people across Canada who lost income because of COVID-19 closures, lockdowns and other quarantine measures.

But CERB ends this month. The Liberal government said in the speech that they’ll replace it with a revamped Employment Insurance system, through a transition program called the Canada Recovery Benefit. Under that scheme, more people would qualify for EI.

But the throne speech offered no precise details about how those changes would work. 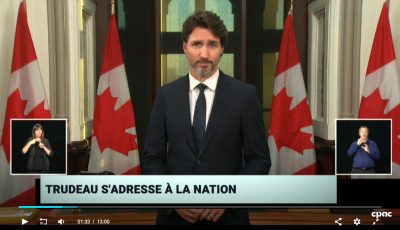 Prime Minister Justin Trudeau making a televised address to the nation yesterday evening. He said that in the fight against COVID-19, Canada now stands at a crossroads, and that with the onset of the pandemic’s second wave, Canadians must remain resolute in their efforts to prevent the spread of the coronavirus. (CPAC screenshot)

At the same time, the federal government will extend the Canada Emergency Wage Subsidy until next summer. For businesses and organizations that have lost revenue because of COVID-19, that program pays 75 per cent of their employees’ wages.

As for climate change and issues affecting rural, remote and Indigenous communities, most of the throne speech’s commitments occur near the end of the document

These include the following:

• Spending on “all types of infrastructure,” including affordable housing, especially for Indigenous and northern people.

• Accelerated spending on broadband networks “to ensure that all Canadians, no matter where they live, have access to high-speed internet.”

• A promise to support regional airlines. “It is essential that Canadians have access to reliable and affordable regional air services.”

• Accelerating work on creating a national action plan to carry out the calls for justice issued by the National Inquiry into Missing and Murdered Indigenous Women and Girls, and implementation of the Truth and Reconciliation Commission’s calls to action.

• A promise to introduce legislation—by the end of this year—that would implement the United Nations Declaration on the Rights of Indigenous Peoples.

• Promises to reduce systemic racism, including reforms to the RCMP that include better civilian oversight.

That includes changes to the Criminal Code of Canada that would make it a crime for care home operators to neglect seniors and put their lives in danger.

“Elders deserve to be safe, respected, and live in dignity,” the throne speech said.

Some of the more significant national promises include the following:

• A pledge to create one million jobs through a variety of programs, including retrofitting homes and businesses.

• A promise to “pursue every technology and every option” to produce faster testing for the novel coronavirus. “The government will also create a federal Testing Assistance Response team to quickly meet surge testing needs, including in remote and isolated communities.” But there’s little detail on how that would work.

• A promise to make “significant, long-term spending” to create a Canada-wide early learning and child-care system.

• A statement saying they are still committed to a national, universal pharmacare program, but there were few details other than a promise to find ways to keep drug prices low.

Speech from the throne 2020 by NunatsiaqNews