Creating new opportunities for women one stitch at a time 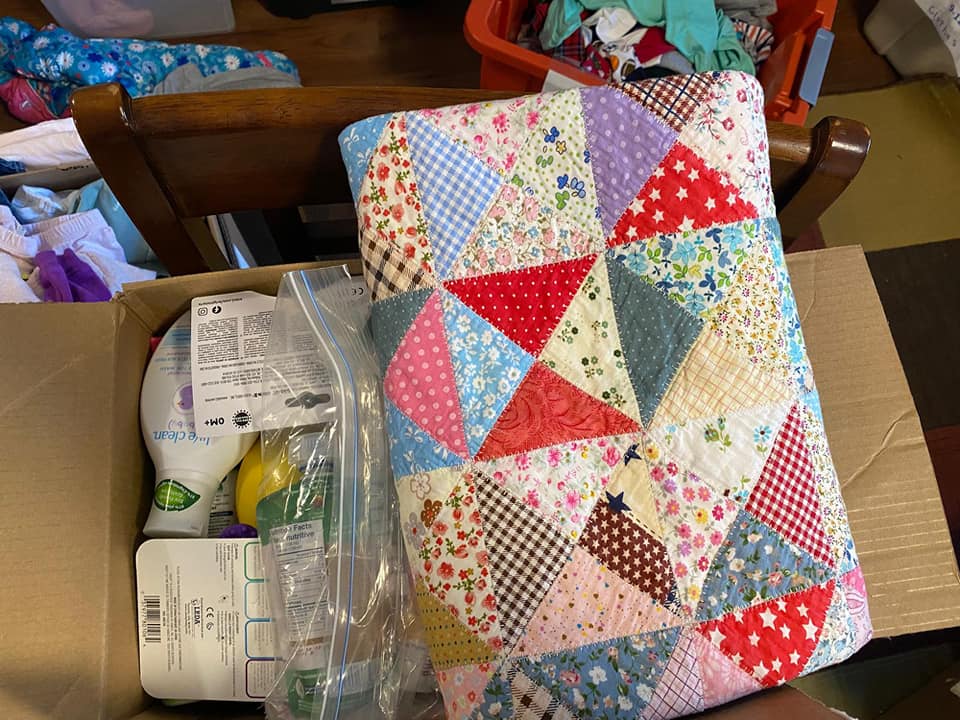 A One Plane Away care box, with home made sewn quilt, is packed and ready to be shipped out across the territory. (Photo courtesy of One Plane Away)

This winter, the five women will participate in a free employment program created and led by One Plane Away, which was founded seven years ago to help provide hard-to-find baby supplies to mothers in need across the territory.

Each woman will receive material, sewing supplies and a sewing machine, as well as instruction from a local elder to help in the creation of a traditional summer amauti that they will work on at weekly sessions between December and March.

“Once [participants] know the pattern for the summer amauti, they have that pattern, and they can make it for themselves, make it for their friends, or even sell it,” said Caris Madsen, founder of One Plane Away, in an interview.

The group will also keep their sewing machines and materials so they can continue to create products to keep or to sell to support themselves and their families.

Once finished with their amauti, they have the option of selling it to One Plane Away at a fair market price, and the amauti will be donated back into the community.

One Plane Away is well known throughout the territory for its “care box” deliveries of baby and children’s clothing and essential supplies to families across Nunavut.

Madsen started the deliveries in 2015, after she learned from friends about the scarcity of baby supplies in the North.

“The fact that in some communities, and even in Iqaluit, [mothers] have to worry about the store not having the proper formula, that’s something that just shouldn’t be a stress,” Madsen said.

“My main goal has been to try and alleviate that stress.”

Despite the best efforts of volunteers and donors, demand from mothers who are in need of care boxes has always outstripped supply.

In 2021, its first full year tracking its deliveries, One Plane Away shipped 361 care boxes. In the first eight months of 2022 alone, it sent out 582 care boxes.

Lack of supplies has often forced the group to ask mothers to pause their requests, which happened in August this year.

That they have grown so much each year with just a small team of permanent volunteers, with others joining in when they can, is amazing, said Madsen, who is currently attending university in Thunder Bay.

Finding ways to create more stable and sustainable solutions for mothers — and to move beyond simply delivering care boxes — is important, she said. That’s what led its members to formalize their operations.

One Plane Away became a registered charity in Nunavut in 2018, allowing it to apply for grant funding from the Department of Family Services.

With that, it delivered its first sewing employment program in Arviat in 2020.

Partnering with family services staff working in mental health outreach, the group ran an 11-week sewing course where five local women, chosen by a random draw, were taught by an elder how to use a sewing machine to sew parkas for their children.

Hilary Manik, who was an outreach co-ordinator at the time, said every woman who took part left with more than just a new skillset and a sewing machine.

They also left with a sense of accomplishment.

“To see the shine on their faces when they completed a project, some for the very first time, was incredible,” said Manik.

She said several of the women continue to sew, making things for their homes and their children, and a few are creating and selling products to help provide for their families.

Many are now teaching their own children, passing along knowledge to the next generation and creating what Manik described as a “domino effect” of healing and learning.

Madsen said she hopes each of the participants in this year’s sewing employment program will inspire them to continue when the program ends.

“Being able to provide someone with a sewing machine and the basic supplies you need to sew is really something that can, if they are interested in sewing, it can kickstart them,” she said.

“It can really serve as a stepping stone.”

The program is scheduled to run in communities in all three of Nunavut’s regions, and is funded by a grant from the Canada Post Foundation.