“We want something that’s small, modular and leaves a minimal impact—no concrete” 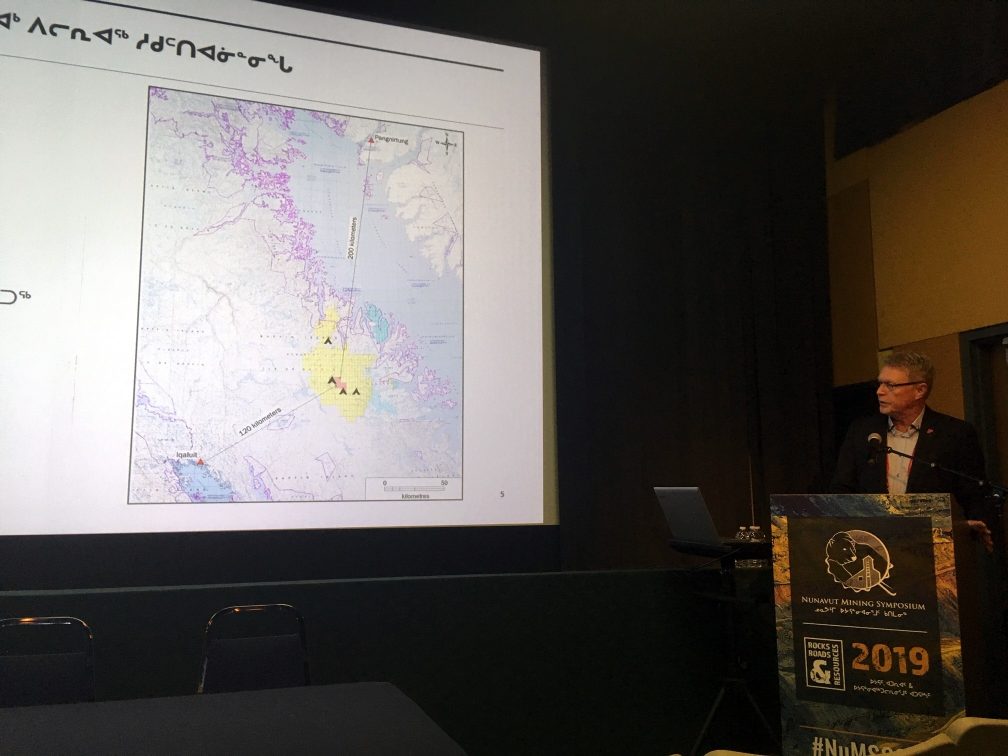 It may not even have a road running to it.

Tom Ormsby, De Beers Canada’s head of external and corporate affairs, offered the Nunavut Mining Symposium a glimpse of the company’s brainstorming during a talk on Wednesday, April 3.

In September 2018, De Beers acquired the Chidliak diamond property as part of its purchase of Peregrine Diamonds. The site is about 120 kilometres northeast of Iqaluit and about 200 kilometres south of Pangnirtung.

Ormsby said the company’s consideration of unconventional approaches to develop the property stems, in part, from past mistakes.

In 2008, the company opened its Victor mine in northern Ontario. A little more than a decade later, the mine is shutting down.

Diamond miners hunt for kimberlite pipes—formations of igneous rock created by eruptions of magma long ago. The Victor mine sits atop one.

There are 15 others known to contain diamonds on the same property, but the mine was only set up with development of the most promising one in mind.

“So we’re pulling it down—all of it,” said Ormsby. “We overbuilt it.”

Chidliak has 51 kimberlites that have been tested for diamonds. Of those, 41 have yielded positive results.

For a site like Chidliak, with numerous smaller kimberlite pipes, Ormsby said it makes sense to design a mine while asking “What’s going to get me pipes three, four, five?”

“We know there’s potential in this project. We think there’s greater potential if we really advance the thinking around it.”

Ormsby offered the example of a De Beers project that sees diamonds mined from the seabed off southwest Africa using ships.

“You don’t get to pour concrete,” said Ormsby. “That’s the kind of approach we’re trying to take.”

That could mean using modular, movable infrastructure at Chidliak.

“We did the best to build that at Victor, and now it’s killing us,” he said.

“We want something that’s small, modular and leaves a minimal impact—no concrete.”

Even the need for an access road is up for debate, said Ormsby. “What would you do if you never had a road?” he asked.

“Not saying we won’t, not saying we will. But we’re saying if you didn’t have a road, how would you do this?”

De Beers is also paying attention to plans being floated to bring a fibre-optic internet connection to Nunavut’s capital of Iqaluit, and how the mine could take advantage of that.

“If you’re going to have a mine of the future, you’re going to need to have to communicate that data,” said Ormsby, who described the possibility of a remote control centre in Iqaluit where some workers could control equipment from afar.

“Could you actually do work remotely from Iqaluit?” he asked.

De Beers is also aggressively looking at renewable energy as the mine’s main power source, rather than as an after-thought, said Ormsby.

The next steps for the project remain much more down to earth. This year the company plans to send up one drill rig sink a dozen holes into the tundra.

It will also begin collecting environmental baseline data and will erect a 60-metre wind tower to assess the potential for wind turbines.

De Beers plans to submit conceptual plans for a mine to the Nunavut Planning Commission in April 2019.

Nobody should be concerned about De Beers neglecting the project, said Ormsby.

“We’re pretty aggressive. We want to put in this mine,” he said.

“We just purchased it for $107 million, so we’re not planning on sitting on it.”