“We never have killer whales in our bay. This is something new” 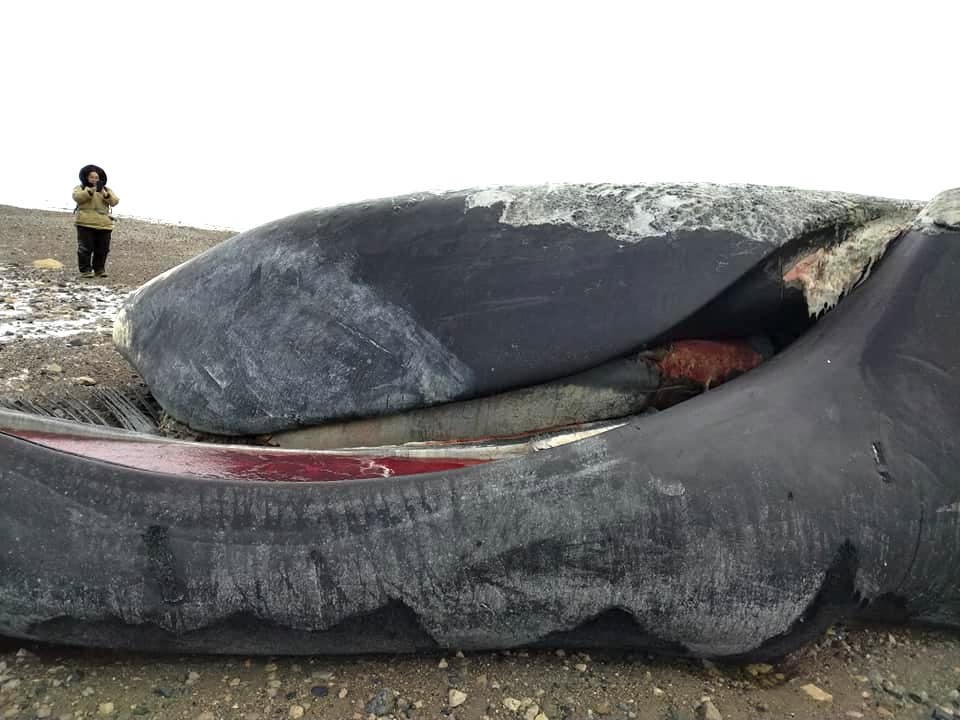 This is one of four dead bowhead whales found beached about 60 kilometres north of Kugaaruk by a group of hunters. Fisheries and Oceans Canada is investigating what caused the deaths. (Photo by Rene Kukkuvak)

This past weekend a group of hunters on all-terrain vehicles found four dead bowhead whales lying on a beach about 60 kilometres north of the Nunavut community of Kugaaruk.

The discovery now has these hunters and a Fisheries and Oceans Canada researcher wondering exactly what happened.

Ferguson looked at photos of the bowhead whales taken by Rene Kukkuvak, in which one appears to have a torn tongue and another shows rake-like gouges. 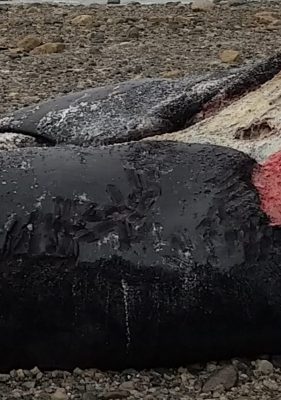 Gouges on the side of this dead bowhead whale could have been caused by killer whales or possibly by polar bears. (Photo by Rene Kukkuvak)

Kukkuvak came across the carcasses while hunting near Boothia Bay for polar bears with his son, Inigo, his wife, Erica, Louisa Mapsalak and Gordon Kukkuvak.

“We never have killer whales in our bay. This is something new,” Kukkuvak told Nunatsiaq News.

The bowhead whales looked not to have been dead long.

Some posters on Facebook speculated that a vessel could have struck the bowhead whales.

But Ferguson said the injuries to the tongue of one bowhead whale were consistent with what has been observed before in killer whale kills: a killer whale will pull down on the bowhead whale’s lip to open the mouth, exposing the fatty tongue to other members of the group.

Judging from Kukkuvak’s photos, Ferguson said the bleeding he noted looked like an injury that took place when the bowhead whale was alive or while being eaten by killer whales.

In a 2012 research paper on “Prey items and predation behaviour of killer whales,” Ferguson cited multiple interviews with hunters in Nunavut who described the killer whales’ hunting techniques.

Most interviewees provided similar descriptions of the methods used by killer whales to attack bowhead whales.

These included drowning a bowhead whale by holding the whale underwater, covering the blowhole and immobilizing it prior to suffocation by biting and holding on to its front flippers and tail.

The interviewees also mentioned how killer whales would ram a bowhead whale to cause internal damage, such as breaking ribs, and would tear chunks of flesh out of the living whale.

In his examination of the photos taken by Kukkuvak, Ferguson said the age of one young dead bowhead whale “would be consistent with our observations of killer whale attacks,” because they favour young bowhead whales, he said. 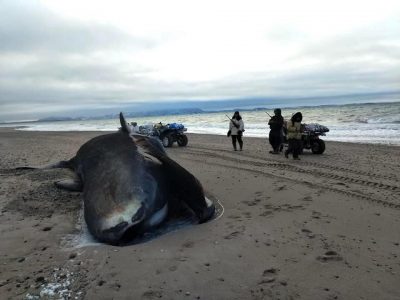 Tracking data has shown that the Gulf of Boothia “is an important place for juvenile bowhead in summer and also for killer whale predation,” Ferguson said.

Last March, Ferguson was among the co-authors of a research paper published in the Proceedings of the National Academy of Science called “Killer whale presence drives bowhead whale selection for sea ice in Arctic seascapes of fear.”

In this paper, they detailed tracking that shows how bowhead whales in the Gulf of Boothia flee into dense ice and shallow near-shore waters when killer whales approach, in behaviour called aarlirijuk (fear of killer whales) in Inuktitut.

This year there is “no ice, not even icebergs” nearby where the bowhead whales landed, Kukkuvak said.

So the bowhead whales may have had nowhere to hide.

Ferguson said he has often wondered if bowhead whales might strand themselves during a killer whale attack.

“But I know of no confirmatory evidence of this in the scientific literature—just the speculation,” he said.

Killer whales are a match for bowhead whales: they can reach six to eight metres in length (19 feet to 26 feet) and weigh more than six tonnes.

They also have recently been in the news globally for their attacks on boats and sharks, in stories titled “Killer whales orchestrating revenge attacks on boats off Spain” and “Orcas are ‘ripping open’ great white sharks for their livers, hearts and testicles.”

Ferguson said the DFO will look to work with the hunters and trappers organization in Kugaaruk to learn more about the beached bowhead whales and possibly set up cameras to see what scavengers are attracted to the carcasses over the winter.