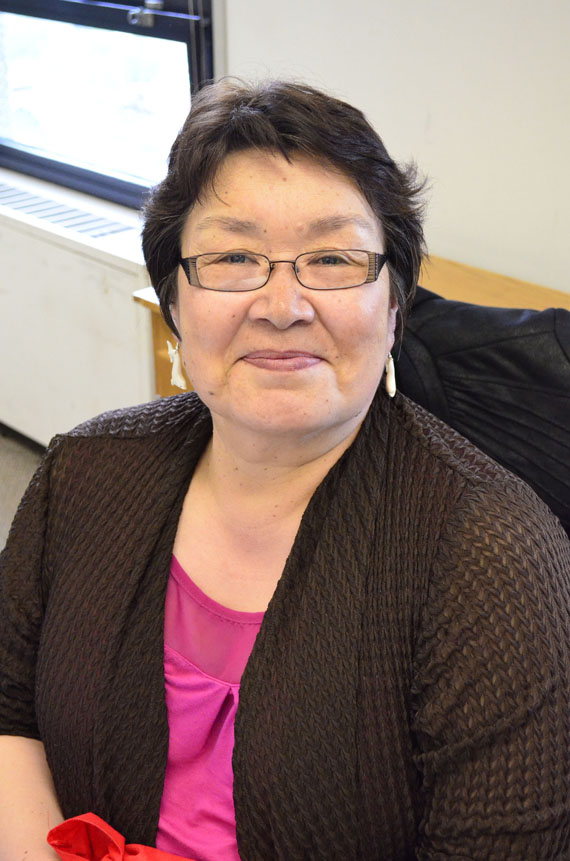 Pauktuutit’s president Rebecca Kudloo will step down from leading the national organization representing Inuit women on Thursday after completing three terms. She encourages the next generation of advocates to “be change-makers” when fighting for equality and social improvements for Inuit women. (File photo)

Departing Pauktuutit president reflects on her past three terms

‘We have to take ownership of our healing to make things better for the future,’ says Rebecca Kudloo

Rebecca Kudloo may be wrapping up nearly a decade leading Canada’s national Inuit women’s organization, but she has no plans to slow down.

“I think I’ll probably be involved in this work one way or another,” she laughed, calling from her home in Baker Lake.

Kudloo, 69, has served as the president of Pauktuutit Inuit Women of Canada, a non-profit that advocates for equality and social improvements for Inuit women, for three consecutive terms since 2013.

As her tenure ends this week, Kudloo said she’s reflecting on the time she spent leading the Ottawa-based organization through new initiatives and growth.

“When I started we only had 10 staff,” she said. “We operated on all project-based funding to bring promotion, awareness and education to women, front-line workers and service providers. Now we have 30 staff and we’re growing significantly.”

Pauktuutit now has a violence and abuse prevention unit, a policy and research division and a full communications unit, Kudloo said. It has also secured in-house legal counsel to support its work with legislative priorities in Ottawa.

Kudloo said she’s enjoyed the opportunity to work internationally as well, including speaking at the United Nations in New York and meeting women from all over the world.

“Anywhere you go, Aboriginal people are experiencing similar issues, so it’s always good to network,” she said. “I really enjoy going to circumpolar countries and meeting other Inuit … that has been really rewarding.”

One of Kudloo’s proudest accomplishments is Pauktuutit’s work with women’s shelters. She said she’s spent 36 years advocating for them.

“We succeeded in moving the needle and we were able to secure $20 million for a minimum of five shelters for women and children in Canada and in Ottawa,” she said.

Once construction moves forward after some pandemic-related delays, the shelters will cater to Inuit women seeking support and fleeing domestic violence.

Kudloo’s final day on the job is Thursday, coinciding with the group’s virtual annual general meeting, which runs until Friday. It also comes on the heels of the group winning the inaugural Women, Peace and Security Civil Society Leadership award from the Government of Canada on Feb. 10.

“In this field, when you’re doing this work, you don’t get recognized too often,” Kudloo said of the award.

“Having this award was really inspiring and it makes you want to do more … it makes you realize you were doing the right thing. At times I call myself Miss Doom and Gloom as we’re always talking about social issues, but I think Pauktuutit is trying to make things better for Inuit women and children, and we’re meant to.”

Kudloo said she’s been trying in recent years to step back a bit from full-time work to give herself more time for fishing and sewing, but she’s a person who likes to keep busy with many projects.

She plans to continue her work with Mianiqsijit, a community-based counselling service in Baker Lake that she co-founded 35 years ago, and will continue working with Nunavut Child and Family Services and the Office of the Auditor General of Canada.

“I probably won’t be sitting at home doing nothing because I always find things to do,” she laughed. “When you’re in this field, it’s hard to just quit. You feel like you’re letting down people who need you … It’s hard to just leave it when people need you so desperately.”

Pauktuutit’s board of directors will hold an election for a new president at a board meeting in March. In the meantime, Pauktuutit’s vice-president, Gerri Sharpe, will act as the interim president.

As for her hopes for Pauktuutit going forward, Kudloo said she wants to see the non-profit continue to grow, especially in the areas of mental health and trauma counselling.

“I would like to advise other women and girls to be change-makers — if there’s something you feel needs to be changed, when you have a passion, even though it might be hard, you never know what you can do until you try,” she said.