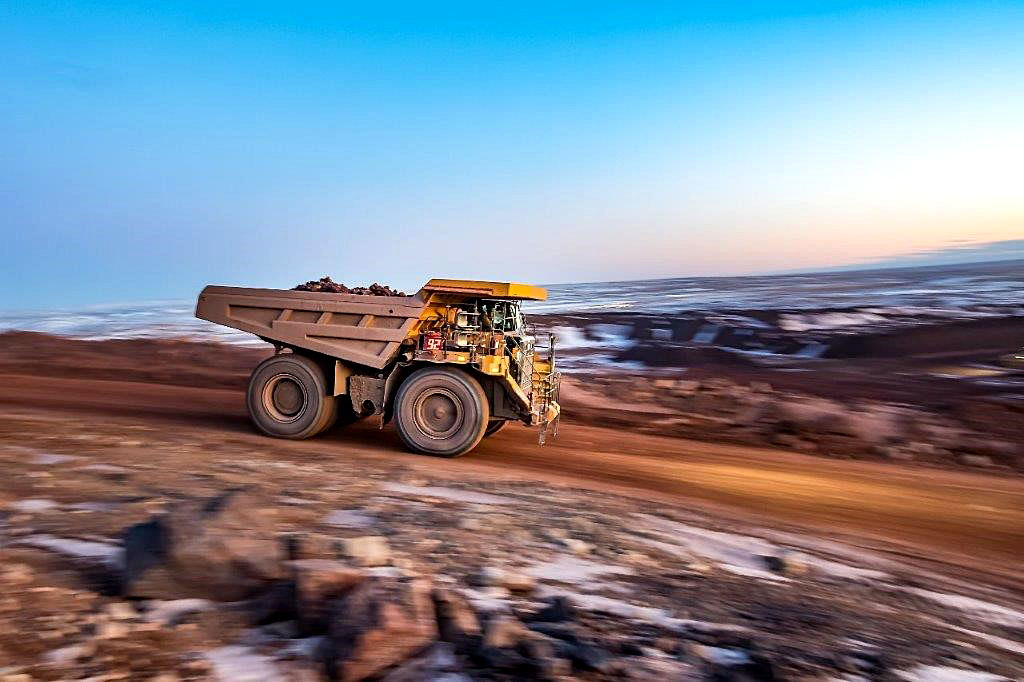 A haul truck at the Mary River iron mine on North Baffin. A financial analysis prepared by a conservation group says Baffinland’s trucked route is financially viable. Baffinland disputes that finding. (File photo)

John West, the director of international consulting firm OpenOil UG, prepared the Financial Analysis: Mary River Iron Ore Mine report for the Oceans North conservation group. Oceans North submitted the document last week to the Nunavut Impact Review Board, which is at the halfway point in a two-week hearing to consider Baffinland’s proposed expansion of its Mary River mine.

Oceans North submitted the report because it wants the public in Nunavut to get the same kind of information that Baffinland shares with investors.

“We object, as a matter of principle, to the fact that an analyst on Wall Street has access to clearer information about Baffinland’s actual plans than does a hunter in Mittimatalik,” Chris Debicki of Oceans North told Nunatsiaq News.

The OpenOil report is available on the review board’s online public registry and at the bottom of this news story. It’s now part of the evidence the review board can consider in its assessment of Baffinland’s railway-based expansion plan.

When Baffinland proposed the Mary River phase two expansion in 2014, it said it needed a railway to Milne Inlet and a doubling of production up to 12 million tonnes a year to make the project profitable.

But the OpenOil report casts doubt on that claim. After looking at a variety of possible future scenarios, the consulting firm found that while a railway to Milne Inlet would increase profits, a continued trucking operation at Mary River would still make money.

“While railway expansion would clearly be more profitable for BIMC [Baffinland Iron Mines Corp.] than continued trucking, trucking would nevertheless yield rates of return that are considered normal in many mining businesses,” the report said.

That’s partly because iron ore prices are on the rise, and partly because the company gets paid a premium due to the extremely high quality of the mine’s ore, which is nearly two-thirds iron.

In December 2020, the global price for iron ore reached $152 per metric ton. At the same time, the company’s estimated production costs — on the trucked route — are about $43 per metric ton.

A railway, however, would reduce production costs even more, to $17 to $18 per metric ton, making the project even more profitable, the OpenOil report said.

And they looked at a possible “Phase 3” scenario, under which Baffinland would increase production up to 18 million metric tons a year through Milne Inlet.

“According to ArcelorMittal financial statements, BIMC has already internally approved a Phase 3,” the report said.

In total, the Milne Inlet railway requires a total capital investment of about $1.4 billion.

Meanwhile, it’s likely the company has already put a lot of money in the railway-based expansion project — prior to its approval by regulators, OpenOil said.

“Company accounts suggest that over $500 million were spent in the 2017-19 period on preparations for this expansion,” the OpenOil report states.

In response, Baffinland told the review board the OpenOil report is filled with inaccuracies and is based on outdated information.

“This optimistic financial analysis conflicts with the difficult reality that during Baffinland’s five-year operating history with trucking, the company has failed to be able to provide its investors with a return on their investment,” Baffinland said in a document filed with the review board.

Baffinland’s original plan — approved by the federal government in 2012 — was to build a 143-kilometre railway from the mine to a port at Steensby Inlet, which has a longer ice-free season than Milne Inlet to the north.

Baffinland still has permission from Ottawa to go ahead with that plan and ship up to 18 million metric tons of ore through Steensby Inlet.

But Baffinland never moved forward with it and has never explained why.

Instead, in a surprise move, Baffinland did an about face in 2013 and pitched a scaled-down proposal for shipping much smaller quantities of iron ore north to Milne Inlet in trucks. It called that the “early revenue phase” and Ottawa approved it in 2014.

Based in Berlin, OpenOil specializes in analyzing natural resource projects. Its clients include the governments of the United Kingdom and Germany, as well as the World Bank and the African Development Bank.

Baffinland is owned by two companies: Nunavut Iron Ore, a private equity firm that owns 74 per cent of the company, and ArcelorMittal, a European steel-maker that owns the other 26 per cent.

It’s also a privately held company. That means its financial statements are not normally available to the public.

But OpenOil was able to use financial information from other sources, including a 722-page financial document that Baffinland circulated among potential bond purchasers in 2018.

At that time, Baffinland hoped to sell about $550 million worth of bonds on Wall Street to help finance its railway-based expansion plans.

But October 2019, Baffinland persuaded the review board to remove the bond-sale pitch from its public registry. (It can still be found on the Nunatsiaq News website.)

And this past week, they moved to have the OpenOil report also removed from the registry. But the NIRB ruled Friday the document should remain on the public record.