Despite the naysayers, southern Labrador Inuit rise up to claim their rights

“We come from Inuit. We are on the land of our ancestors, still there.” 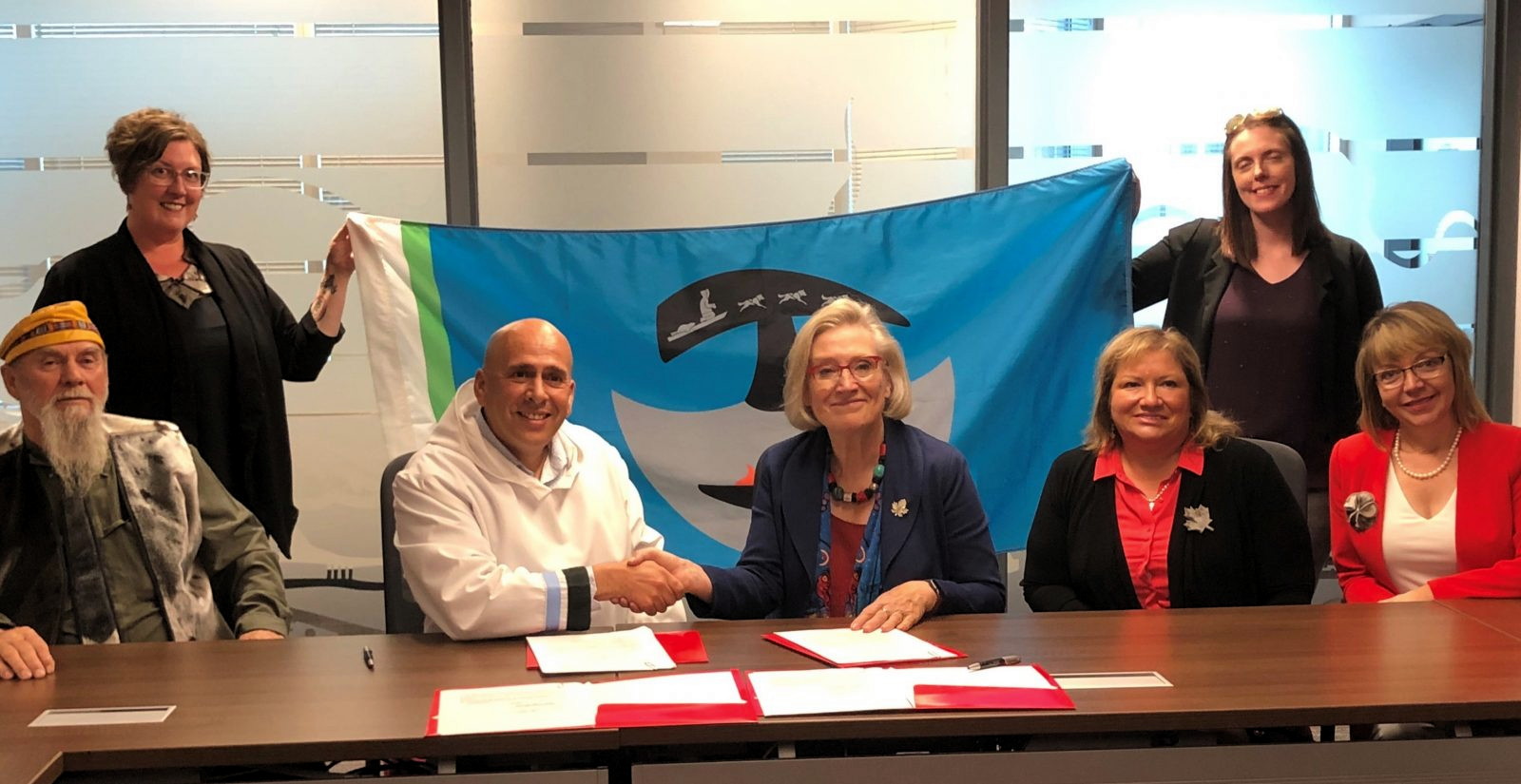 No matter how much disbelief the doubters may throw at him, Todd Russell does not question who he is and who his people are. They’re Inuit, always and forever.

“We come from Inuit. We are on the land of our ancestors, still there. To me, there’s no other questioning. That’s who we are, that’s where we’re from, that’s what we’re about,” Russell said.

Russell, 53, grew up in a tiny southern Labrador community called William’s Harbour, whose people were resettled in 2017. A skilled orator, he served as the Liberal MP for Labrador between 2005 and 2011, and has been president of the NunatuKavut Community Council, also known as the “NCC,” since 2012.

The NunatuKavut Community Council says it represents about 6,000 Inuit-descended people of mixed ancestry, who until 2010 identified as Métis and who primarily are from southern and central Labrador, south of the Churchill River. 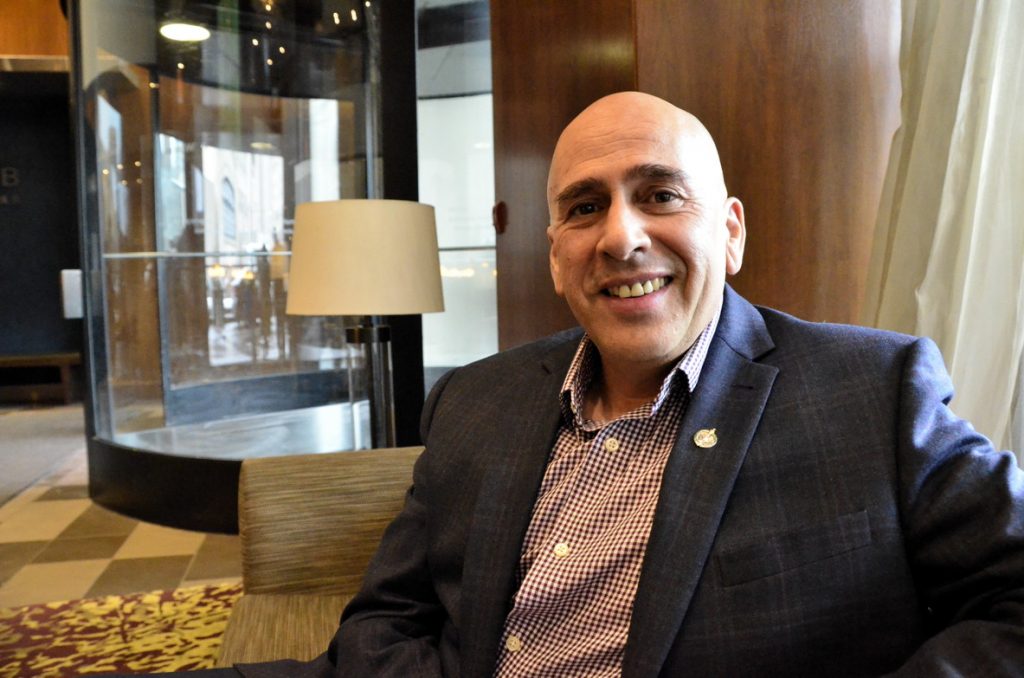 Todd Russell, the president of the NunatuKavut Community Council: “And I say to our people, don’t let other people tell you anymore about who you are and what our history looks like. Just think about yourself and your own family and where you come from.” (Photo by Jim Bell)

They say they’re the inheritors of a treaty reached in 1765 between the Inuit and the British Crown—but they don’t have a modern comprehensive land claim agreement. Very few speak the Inuit language, although words like “ulu” and “komatik” are still used locally and many still harvest seals and caribou and fish for salmon or cod.

And for many years, the federal Justice Department did not recognize the NunatuKavut as an Indigenous people capable of holding rights under section 35 of the Constitution, and hardly anyone else recognized them either.

But all that changed in July 2018. That’s when Carolyn Bennett, the Crown-Indigenous relations minister, agreed to start talks with the NunatuKavut people about their Indigenous rights and their right to self-determination.

Those talks bore fruit, in the form of a potentially history-making deal signed on Sept. 5, 2019, just before the start of last fall’s federal election campaign.

In that agreement, styled as a memorandum of understanding, Canada recognizes the NunatuKavut as an “Indigenous collective capable of holding section 35 Aboriginal rights.”

The process they’ve agreed to start isn’t quite the same as a land claim negotiation. It’s based on a new idea from the federal government called “recognition of Indigenous rights and self-determination,” or “RIRSD.”

But others don’t seem willing to acknowledge the NunatuKavut as an Indigenous people. When Nunatsiaq News contacted Inuit Tapiriit Kanatami in late January to ask if, as a result of the MOU, ITK now recognizes the NunatuKavut as a representative Inuit organization, ITK did not answer the question.

“At this time, we respectfully decline to comment,” an ITK spokesperson said.

As for the neighbouring Innu Nation, they flatly refuse to acknowledge the NunatuKavut as an Indigenous people. 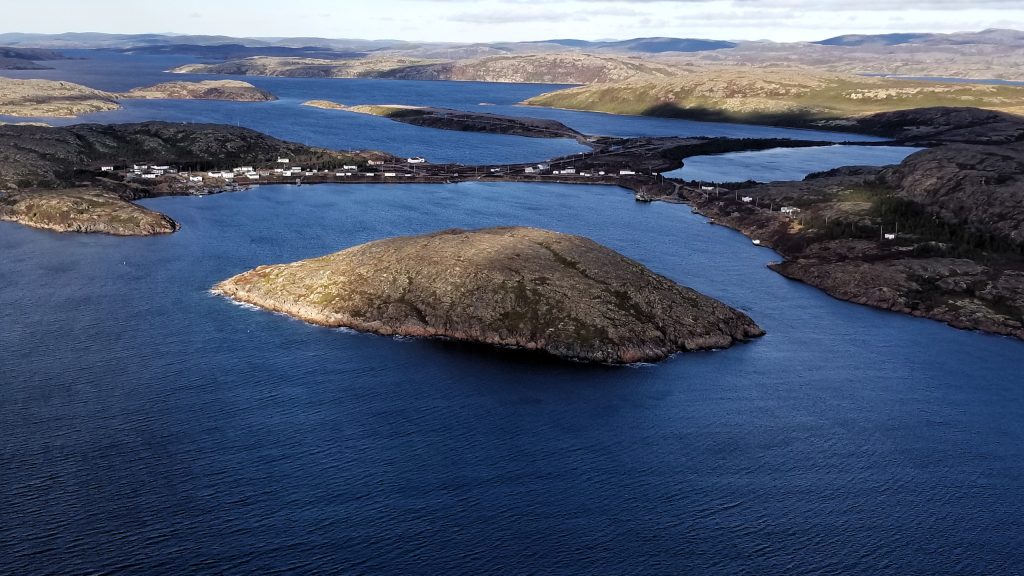 The NunatuKavut community of William’s Harbour, Labrador, whose people were resettled by the Government of Newfoundland and Labrador in 2017. (Photo courtesy of NunatuKavut Community Council)

In light of all this, Russell sat down with Nunatsiaq News at the Northern Lights trade show in Ottawa last month to talk about his people’s aspirations and what they hope to achieve through their new arrangement with Ottawa.

He said that right now, they’re still narrowing down a list of issues to be negotiated. But a big one is access to the federal government’s Non-Insured Health Benefits program.

To that end, the NunatuKavut council isn’t waiting for a deal that would give its members NIHB access.

They’ve already introduced their own $1.75-million program—as a one-year pilot—to help members with the high cost of medical transportation. Their do-it-yourself program offers an annual medical travel benefit of $5,000 per patient or $7,000 for a patient and an escort.

They’ve also just announced a home repair program offering grants of up to $11,000 to members with combined incomes below $40,000.

Another item on their to-do list is infrastructure, Russell said, citing the community of Black Tickle, where a house burned to the ground in early February, while community members stood and watched. Black Tickle, which has a population of about 120, has no fire department and no firefighting equipment. 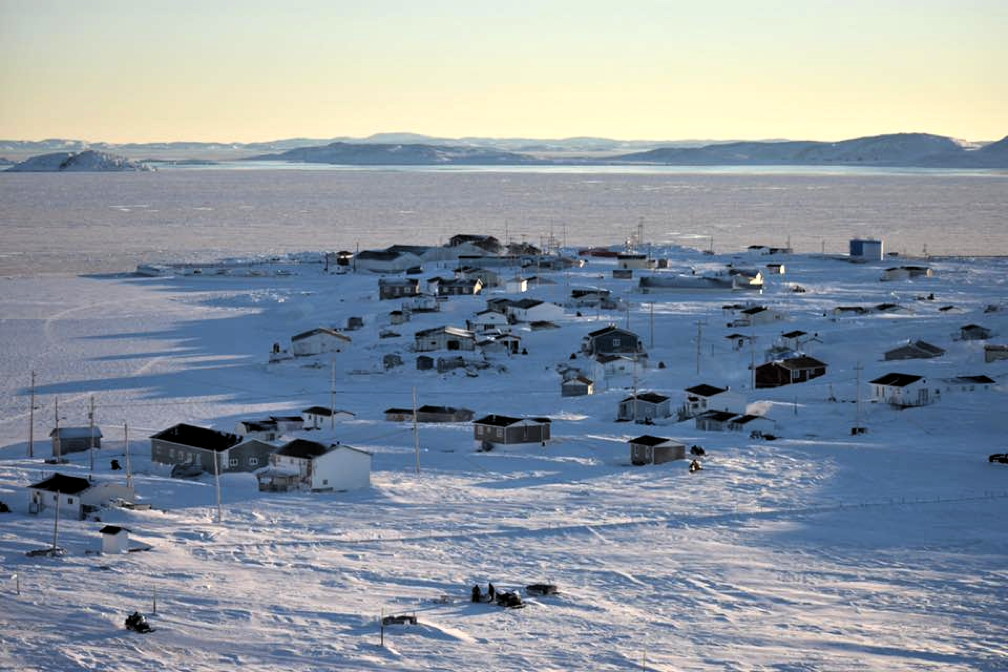 Other discussion topics include education, resource development and the fishery.

And, throughout all their talks with Ottawa, the NunatuKavut will seek self-governance.

“We know that when we run our own programs for our own people, designed in our own way, responding to our own people’s priorities, the Inuit of NunatuKavut, we will be very well served by this approach,” Russell said.

On economic development, the NunatuKavut already have their own development corporation, called the Nunacor Group of Companies. Nunacor owns the Royal Inn Suites in Happy Valley-Goose Bay and is active in crab and shrimp harvesting, real estate, training and other areas. 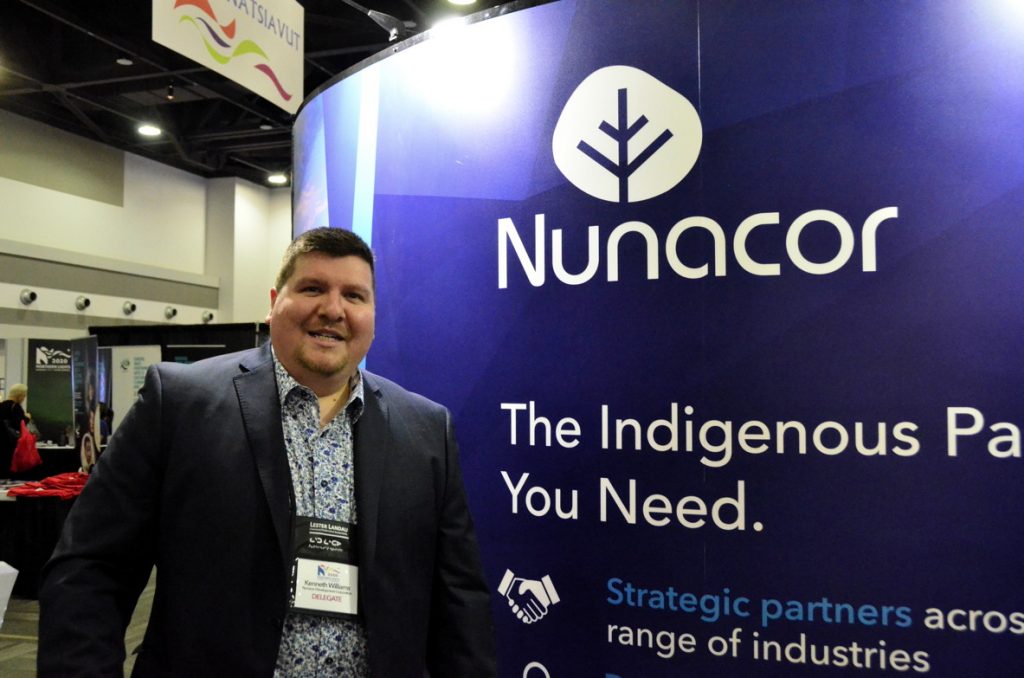 Eventually, the Indigenous rights and self-determination process will lead to discussions on land rights. On that point, a map illustrating the area claimed by the NunatuKavut reveals what could become an extremely difficult issue: overlapping claims with their neighbours, the Innu Nation and the Nunatsiavut Government.

“They can be worked out as long as there’s a willingness on the part of the different parties to come to the table with respect, with understanding,” said Russell.

But not everyone seems willing to do that. After Russell and Bennett signed their Indigenous rights pact last September, the Innu Nation lashed out at them with an application to the Federal Court of Canada that seeks to quash the Ottawa-NunatuKavut deal, claiming Bennett had no legal authority to sign it.

That court action accused the NunatuKavut of being, in essence, imposters.

“The Innu of Labrador do not, and have never, accepted that NCC or any of its predecessors represent an Aboriginal people of Canada within the meaning of s. 35 of the Constitution Act, 1982,” the lawsuit states.

And they alleged that Yvonne Jones, a NunatuKavut member who is also the current Liberal MP for Labrador and was Bennett’s parliamentary secretary when the MOU was signed, was in a conflict of interest.

The NunatuKavut responded with a statement describing the Innu Nation allegations as inflammatory, misleading and unfounded. “These allegations are a form of racism and lateral violence against NunatuKavut Inuit and perpetuate colonial narratives,” their statement said.

As for the Nunatsiavut Government, for now they’re taking a non-committal position: “We have not issued any position statements on this,” the spokesperson said. 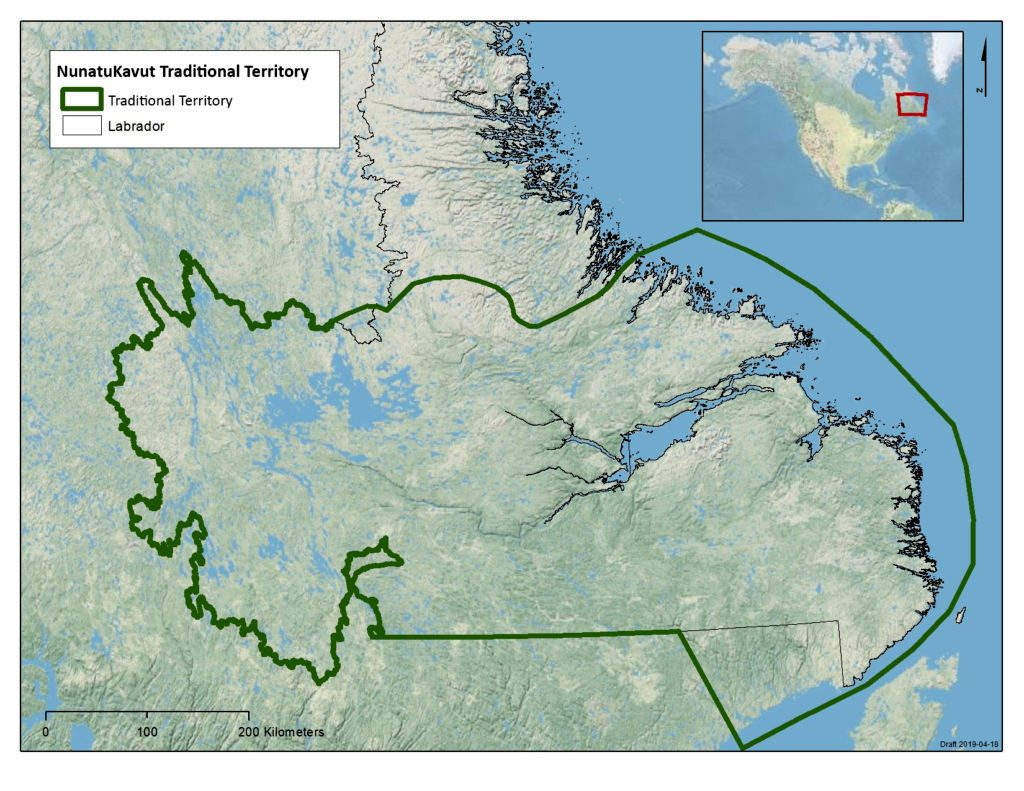 This map shows the area of southern Labrador that the NunatuKavut say they have traditionally used and occupied.

The Nunatsiavut Government represents more northerly people who were accepted as members of the old Labrador Inuit Association.

Like the NunatuKavut, many beneficiaries of the Labrador Inuit land claim agreement are also of mixed ancestry. In the past, they were known as “settlers” or “livyers.” Many settlers were unable to speak the Inuit language but lived alongside the Inuktitut-speaking people and made a living through hunting, trapping and fishing.

After much debate, those mixed ancestry settlers were admitted into the Labrador Inuit Association as members and are legally described as “Kablunângajuit” in the 2005 Labrador Inuit land claims agreement. A few Nunatsiavut beneficiaries have no Inuit ancestry at all—but were eligible to become land claim beneficiaries by meeting certain criteria.

In contrast, most of the mixed ancestry people of southern Labrador have never been legally accepted as Inuit—even those with family ties to Nunatsiavut beneficiaries.

“In central Labrador especially, you’ll find that some of the older people are members of Nunatsiavut and then all the youth, the younger generation, are all members of NunatuKavut,” Russell said.

The reasons for that are complex, having to do with the history of European contact and occupation in Newfoundland and Labrador, the history of the Moravian mission in northern Labrador, the unique way in which identity politics developed in Labrador over the past 40 years, and the stigma—caused by racial prejudice—which in the past led many southern Labrador people to hide or deny their Indigenous ancestry.

John Kennedy, an anthropologist at Memorial University, described that stigma in a lengthy article he published in 2015, titled “Being and becoming Inuit in Labrador” in the journal Études Inuit Studies.

And the Labrador Inuit land claims agreement itself contains a complex, multi-part definition of who is eligible to be considered a beneficiary and who isn’t, based on time and place of birth and ties to certain regions.

But he says research reveals a long history of Inuit occupation in Labrador, reaching as far south as the Northern Peninsula of the island of Newfoundland.

“Inuit lands, Inuit culture extends all the way down the coast of Labrador into some of the interior areas. This is a fact. Even the Northern Peninsula. That’s a fact. We can’t deny that our people lived in some of these places,” he says.

But when discussions of complex overlap questions turn to the story of how the southern Labrador people have been reclaiming an Inuit identity, Russell’s rhetoric soars to poetic heights.

“That is such a beautiful and energizing and invigorating part of our story. And I say to our people, don’t let other people tell you anymore about who you are and what our history looks like,” Russell said.

“Just think about yourself and your own family and where you come from. There’s more truth in that story and that narrative and that way of being than there ever was in some of those history books that were taught sitting there in that one-room school with the wood stove burning.”