It’s not a solution to the housing crisis, but it’s a start, says committee chair 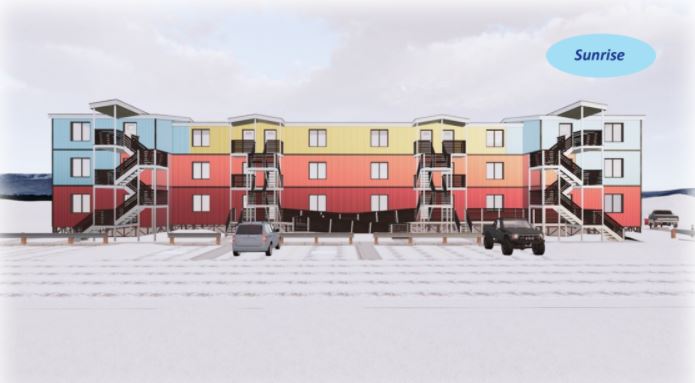 Iqaluit is on track to get 18 new affordable housing units next year, according to the CEO of the company responsible for the project.

Construction on the three-storey building, which will be located on Joamie Court, is scheduled to begin in May and be completed 13 months later, said Clarence Synard, CEO of NCC Investment Group.

He updated the city’s engineering and public works committee Monday at city hall.

“This building’s gonna be seen from all over the city,” Synard said. “The people living in these units, in all 18 units, are going to have beautiful views, looking right down Frobisher Bay, across the core of the city and in up the Sylvia Grinnell River.”

In the 15,000-square-foot building, six units will have two bedrooms and 12 will have one bedroom. The main floor will have four barrier-free units with larger doors, wheelchair accessibility and lower kitchen countertops.

Councillors approved the plan in December and the city hired NCC to design and build it. The project will cost $10.7 million, all paid by the Canada Mortgage and Housing Corp., half from its rapid housing initiative fund and the remainder from its co-investment program.

The units will be made for Inuit, and at least 50 per cent of them will be allocated to women and women with children, said the city’s chief administrative officer, Amy Elgersma.

Once the building is completed, the Nunavut Housing Corp. will buy it from the city.

Synard said NCC has consulted with the housing corp. to learn about what kind of features the building should have, such as front and rear entrances.

The building will also have more insulation between floors and walls, energy-efficient windows, LED lights and the capacity to handle solar panel.

Site work, such as rock removal, is set to begin in May and construction on the frame is slated for late July, said Synard. The plan is for finishing touches, such as paint and cabinetry, to begin in February 2023, with completion in June.

While Coun. Joanasie Akumalik and Mayor Kenny Bell congratulated everybody involved with the project, Coun. Sheila Flaherty expressed some concerns with the design details.

“It just seems that the units are going to be small and there’s going to be overcrowding,” she said.

Elgersma responded, saying this one project can’t solve the housing crisis in Iqaluit, but it can help.

“This will definitely meet a need,” Elgersma said. “It doesn’t meet all the needs … We also believe that we’re setting up a model to be able to replicate this type of project to do something similar in the future.”

Coun. Romeyn Stevenson, who is also the chairperson of the economic development committee, said there is a need for this project but agreed with Flaherty’s concerns.

“There needs to be places for families, not just for smaller family units because people will just pile into those spaces,” he said.

“This is by no means the solution to affordable housing or to the housing crisis in Iqaluit or Nunavut, but it is definitely a start.”