An Arctic char lies on a mesh screen before being sampled as part of a multi-year fisheries research project near Cambridge Bay. (Photo courtesy of Les Harris)

CAMBRIDGE BAY—If you live in Cambridge Bay and like to fish, you could end up becoming part of a multi-year fisheries research project on Arctic char.

That’s what happened to fisherman Andy Mala last week when he opened up a char that he had caught and found a curious black plastic device, about the size of an AA battery, inside. 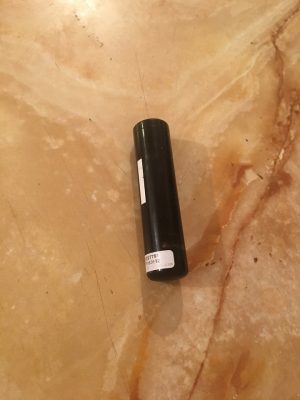 Here’s the small acoustic transmitter that a Cambridge Bay man recently found in the stomach of an Arctic char. Andy Mala connected online with DFO researcher Les Harris, who was able to tell him more about the travels of this fish. (Photo courtesy of Andy Mala/Facebook)

“Any idea what this might be?” he asked on the community’s online news page.

Mala didn’t have to wait long to hear back from Les Harris, a fish biologist from Fisheries and Oceans Canada: “it is an acoustic transmitter that we surgically implant in char. We have been studying their movements and habitat use with these transmitters since 2013. ”

Not only that, but Harris told Mala he would get a reward ($40 for the transmitter), if he took it  to the Ekaluktutiak Hunters and Trappers Organization.

Harris also asked for the device’s identification number on the side of the transmitter, so he could tell Mala when and where the fish was tagged.

“If you have any questions, feel free to reach out to me. Koana,” said Harris, who was in Cambridge Bay to speak at the Kitikmeot Regional Wildlife Board’s annual general meeting.

By checking the number on the acoustic transmitter, Harris learned Mala’s char was tagged going upstream at the Halokvik River (30 Mile) in 2013, about 80 kilometres from Cambridge Bay.

When Harris spoke to the wildlife board members on Sept. 25, it was clear that many appreciated the DFO project’s efforts to learn more about char.

Before he made his presentation, Harris also thanked the many in the community of about 1,800 who help the DFO every summer. He specifically acknowledged Richard Ekpakohak and Meyok Omilgoetok.

They have both put so much effort into research, they will be named as authors on a paper in development updating the results of the char project, Harris said.

This year marked the 11th summer that Harris has come up to Cambridge Bay. And it’s the seventh summer that he’s spent working on the Arctic char tagging project with Jean-Sébastien Moore from Université Laval.

They then spent the rest of the summer retrieving and redeploying their acoustic telemetry equipment scattered in the waters throughout the Greiner Lake system around Cambridge Bay—equipment that lets them track where the fish go.

On non-spawning years, the project has learned that char “from all systems” head to Ferguson Lake (Tahiryuaq) to spend the winter—a short journey—rather than travel up the longer rivers to their own spawning grounds, a strategy to conserve energy in non-spawning years.

The overall goal of the project is to increase the understanding of Arctic char migrations and habitat use around Cambridge Bay and to use that information to make informed management decisions for the commercial fishery.

That’s important for Cambridge Bay’s Kitikmeot Foods fish plant, which processes up to 60,000 kilograms of char harvested from five places in the vicinity of the community.

At the AGM, Harris also stressed the importance of filling out the commercial fishery log books so that catch-effort data and bycatch, meaning other species caught in fishing nets, can be traced.

That’s important because any char exported to the United States now has to have any bycatch reported, specifically marine mammal interactions, Harris said, in order to be in compliance with laws there.

The DFO project is also trying to find out more about the age of char caught around Cambridge Bay.

In 2017 Harris and the team, led by Colin Gallagher, who is also with the DFO, injected more than 1,000 char with strontium chloride. The chemical, which Harris said has no toxic effect, makes a mark in the ear bone or otolith, so at a later date researchers can see how much it has grown by looking at its rings.

Reading the rings on an ear bone of an Arctic char can show its age. (Photo courtesy of Les Harris)

The oldest char that Harris said he has ever seen is 42 years old.

Over the years, thousands of char have been tagged in the region. Short yellow or red plastic strands, also known as “spaghetti tags,” are attached to the backs of the fish, and include phone numbers to report the tags to the HTO in Cambridge Bay, with samples, if possible.

If you catch one of these tagged fish, you can collect a reward.

Fish with yellow tags carry acoustic transmitters, which are worth $40. But fish with red tags are worth more if the entire fish is returned. These are worth $100 whole or $75 with only the fish head and tag.

This summer, some char were fitted with acoustic transmitters, like the one Mala caught. These let the DFO track where fish like Mala’s go.

Harris said the acoustic emissions are “negligible” to marine mammals. This is especially true in the Cambridge Bay region where whales are very uncommon.

As for sampled fish, these are not wasted: they are made into piffi or dried fish and given to the wellness centre and distributed to elders and others in the community.

During the meeting, some communities’ HTOs criticized certain researchers for not giving feedback about their results.

But the char-tagging project earned praise from Dan Shewchuk, the chair of the Nunavut Wildlife Board.

Shewchuk called the project an “example of how the DFO is being responsible.”

“Char is a very important fish and it can be used in a sustainable way for development,” he said.