This before-and-after shot of the void at Iqaluit’s water treatment plant shows how much fuel had leaked from an old tank found in the space last fall. (Photo courtesy of the City of Iqaluit)

Black tar found in the concrete walls of underground water tanks at Iqaluit’s water treatment plant caused December and January’s fuel contamination in the water supply — but the water has always been safe to consume, experts hired by the city say.

The city hired WSP in October to inspect the water treatment plant and consult the city on how to move forward after fuel was confirmed in the municipal water supply, triggering a Government of Nunavut do-not-consume water advisory that lasted two months.

“The water in the distribution system which includes water coming from consumer taps, has been safely consumed [from Oct. 12 to May 5] with respect to hydrocarbons,” Moran told the public. 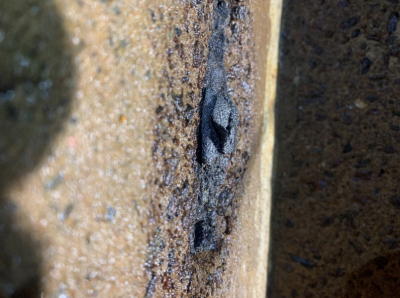 Black tar on the walls of an underground tank at Iqaluit’s water treatment plant is to blame for the return of fuel contamination in the water last December and again in January. (Photo courtesy of the City of Iqaluit)

“Even a lifetime exposure to the water during this time would not be expected to increase health risks for any consumer, which includes children.”

Between Oct. 2, when reports started coming in about a fuel smell in the water, and Oct. 12 when the advisory was put in place, people reported headaches, dizziness, stomach aches and skin irritation.

While the tars causing the December and January contaminations were “identical,” the contamination in October was distinctly different. The original event was caused by an old, leaky fuel tank in a part of the water treatment plant known as the “void.”

Moran and water quality specialist Charles Goss were back at city council Thursday to explain what happened during two subsequent fuel contamination events at Iqaluit’s water treatment plant — one in December, another in January.

WSP inspected an underground tank called a mixing chamber and found that concrete had broken off one of its walls, revealing black tar that had “direct contact with the water” and smelled like fuel, Moran said.

They inspected the other underground tanks, but did not find any more exposed tar.

City officials bypassed the mixing chamber the next day, and that bypass was in place until Jan. 17.

In mid-January, more than 100 residents reported smelling fuel in their water again, and testing revealed heavy lubricants and oils were present in the water.

When they looked again, WSP engineers found black tar in a different chamber, where it wasn’t seen before.

Moran said he believes bypassing the mixing chamber caused the normally calm water in the other chamber to become turbulent, which in turn caused its concrete walls to crumble, revealing more black tar.

It took the city five days after the first complaint to engage a bypass of all the plant’s concrete tanks.

The black tar is known as a waterstop, which is used to stop water from moving through concrete joints. It contains heavy oils and lubricants, which are included in F3 and F4 families of fuel compounds.

The tar was certified to be used around potable water when it was installed close to 20 years ago, but is not any more.

Goss said that doesn’t necessarily mean the product is unsafe. It could mean the manufacturer didn’t go through the certification process again, he said.

Moran said the underground tanks are in good condition otherwise and do not have any more hydrocarbons in them.

“The real issue at this point in time is the exposed waterstop products in the water treatment plant,” Moran said, adding WSP recommends the city remove all of the black tar substance from the tanks and install a concrete layer of protection.

It’s not clear at this point how much that work might cost. Meanwhile, the city is continuing to use its bypass system to avoid the affected tanks.

Coun. Kyle Sheppard asked the experts if there’s any other evidence that the contamination could have been from something else, to which Goss replied no.

“There are elements of our population that might not believe anything that we come up with at this point,” Sheppard said.