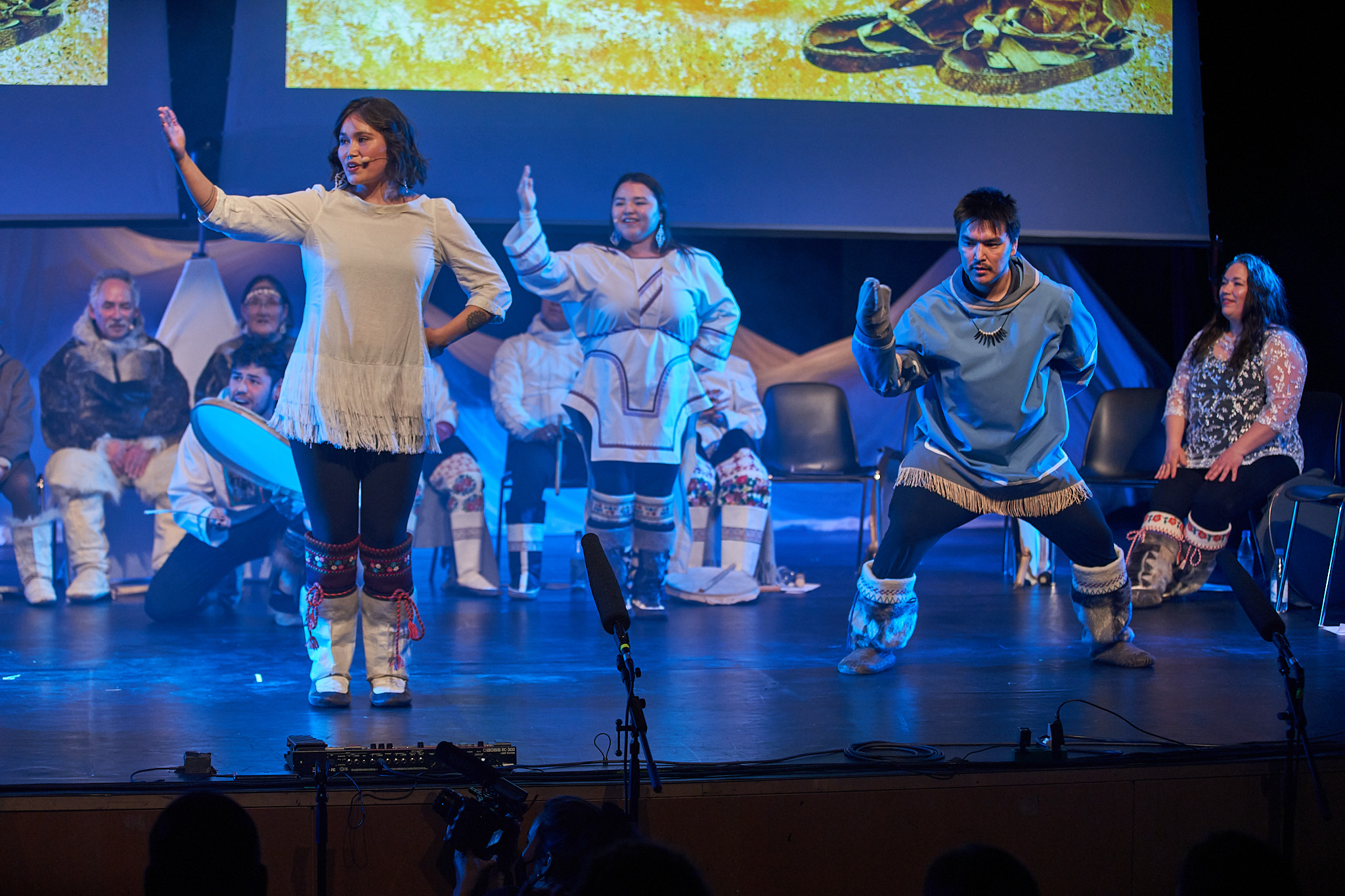 It’s tough for Sandi Vincent to decide what her favourite performance might have been at the Katuaq Katuarpalaaq drum dancing festival in Nuuk, Greenland, last week.

There was a pop-up performance in the foyer of the Katuaq Cultural Centre, which the drum dancer said was a beautiful and special place to perform. The drum dancers also performed to a sold-out crowd on the big stage.

There was also a day after rehearsals when a married elder Greenlandic couple, Genoveva and Inukitsoq Sadorana, shared a song that Inukitsoq’s father taught him. Vincent said all the participants gathered around them, hummed and sang together, and listened to the Inukitsoq sing the chorus.

“It was just for us in the theatre experiencing it,” she said.

Vincent is one of six Nunavut drum dancers who participated in Katuarpalaaq, which ran from March 21 to 25. They travelled to the festival through a partnership between the Qaggiavuut arts and cultural organization and Greenland’s counterpart, Katuaq.

The group returned on March 26 after a week of workshops, panels and performances by drum dancers from Alaska, Canada and Greenland at Katuarpalaaq.

Vincent said it was special to learn from Inuit drum dancers from other countries and continents.

“Everyone had something to share and teach and there was a lot of passion for drum dancing,” she said.

The festival was especially important this year because the UN Educational, Scientific and Cultural Organization recently added Inuit drum dancing and singing to its Representative List of the Intangible Cultural Heritage of Humanity, Vincent said.

The participants spoke about the similarities in their style of drum dancing, such as using it as a way to tell stories and share knowledge.

The drums were mostly similar, made from driftwood and female caribou stomachs. Although, there were some made using new techniques and materials.

“Inuit are always being innovative and adapting to the new materials available,” Vincent said.

But the size of the drums differed from region to region, with drums in northern Greenland being smaller than those from southern Greenland and Nunavut.

Vincent got her start as a drum dancer about 20 years ago when Sylvia Cloutier, an artist originally from Kuujjuaq, went into Iqaluit’s Baffin Gas Bar and met Vincent, a teenager working at the gas station.

After that day, Cloutier began teaching Vincent drum dancing, which sparked Vincent’s career in the art form and led them to perform together again last week in Nuuk.

Vincent then continued learning about the art form at Nunavut Sivuniksavut, where she built a drum with her instructor in 2006 — a drum that she used in Nuuk.

She said there were a lot of young people in Qaggiavuut’s group, and that many of the participants were happy to see young people taking an interest in drum dancing.

Shelton Nipisar, who also participated in the festival, first learned to drum dance from his aunts while he was in elementary school.

He took a break from it as he got older, only performing for weddings or graduations, but took it back up when he participated in and learned about the differences in eastern and western drum dancing styles at Nunavut Sivuniksavut.

“And because of that, I wanted to learn more about history, how they used it,” he said. “It also helped me connect to my past, present and to our future. It helped me decolonize myself personally, politically [and] spiritually.”

Nipisar, who is originally from Arviat, said he was able to further his understanding of drum dancing at the festival, not only from Greenlandic Inuit, but from an Inuvialuk teammate from the western Canadian Arctic.

“What they compose with their traditional songs — it’s how they compose it from their environment, [based on] what they saw, what they felt,” he said.

He added to what Vincent said about the drum sizes, adding that for Nunavut Inuit, drums were traditionally made to be the size of a chest, so that “this other person who [he’s] battling with would have a hard time controlling [his] drum.”

After performing at the Katuaq Centre, Nipisar said he wants a similar cultural centre in Nunavut, where Inuit can go to share their knowledge, perform and pass down traditions.

“I would love to see that in Nunavut so that there will be more opportunities for Inuit across Nunavut,” he said.