Some seek relief by swimming, fishing 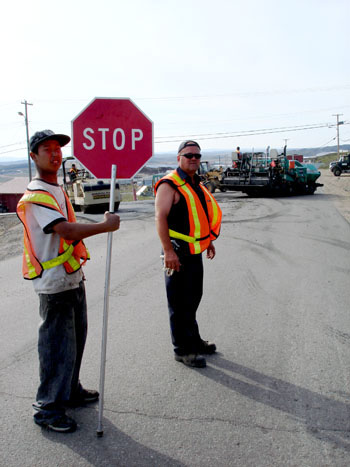 A road paver’s dream: last weekend’s dry heat in Iqaluit was perfect for the city’s road paving team, who managed to lay asphalt on most roads in the Happy Valley section of town. (PHOTO BY JANE GEORGE)

You don’t usually see a national weather map on television that features the word “hot” plastered in red type over the map of northern Quebec and south Baffin.

But starting July 23, Iqaluit and Puvirnituq— the other hot spot of the Eastern Arctic — were hot by any Canadian standards, with temperatures reaching the high to mid-20 Cs.

Temperatures continued their rise in these two communities throughout the weekend to hit record-breaking highs.

The low of 12.5 C for Iqaluit on July 25 remained far above the low temperature record of 0 C set in 1963 and more than the average regular low of 4 C for this date.

Puvirnituq’s temperature for July 25 was even hotter, reaching a high of 29.4 C — although no historic information exists about past temperatures for this Hudson Bay community.

On Sunday, July 26, temperatures remained warm: in Iqaluit the high reached 25.5 C and in Puvirnituq it reached 27.5 C.

Environment Canada even gave Puvirnituq a 28 C humidex reading, a rating used to reflect the combined effect of heat and humidity, which is normally associated with southern cities during the summer.

To cool off over the weekend, many in Iqaluit headed out by boat to camp down the bay. Others sat on their porches or in the shade by the side of their houses.

Some dug out their fishing rods and walked off to the Sylvia Grinnell River to fish. Swimmers found relief in a shallow pond off the Road-to-Nowhere.

For road paving crews in Iqaluit, the hot dry weather was ideal and allowed them to finish paving the city’s Happy Valley neighborhood.

Sealift activities continued right throughout the warm nights when the tide was in.

However, the hotter-than-average weather wasn’t comfortable for everyone, particularly for those at the Qikiqtani Regional Hospital where some portions of the building reached 38 C.

Staff told Nunatsiaq News that the hospital also experienced a heavier-than-average level of emergency visits during the warm weekend.

In 2008, a similar heat wave hit Iqaluit and many parts of Nunavik in mid-July.

The level of heat and the discomforts it can cause, especially for the very young and old, may foreshadow future conditions in a much warmer Arctic where temperatures may rise on average from 3 C to five C or higher over land.

Heat waves can be dangerous, as demonstrated by the killer summer of 2003 in Europe, when an estimated 37,451 people died.

To see whether excessive heat could affect the health of people living Canada’s North, a study presented at the recent International Congress of Circumpolar health in Yellowknife looked at whether hot days in Whitehorse and Yellowknife caused a spike in deaths.

An increase in deaths in the northern cities of Stockholm and Helsinki when temperatures rise has already been noted in previous studies.

Tom Kosatsky from the British Columbia Centre for Disease Control found no heat-related spikes in deaths in Whitehorse, but he did see some relationship between heat and deaths in Yellowknife.

But there aren’t many hot days yet in these two cities, he noted.

The circumpolar health conference also produced good news about the relationship between heat and health.

“As temperatures go up you live longer,” Kue Young from the University of Toronto said at the recent circumpolar health conference.

Using data from 27 Arctic regions, Young’s research determined that a cold climate is associated with increased mortality, fertility, and a lower life expectancy.

For every 10 C degree temperature drop, he found life expectancy among males decreases by six years and infant morality goes up by four per in 1,000 births.

But sharp increases in Arctic temperatures would be unlikely to produce beneficial effects for anyone living in the circumpolar region, the researchers warned.

Previous studies on the possible health impacts of climate change in the Arctic show people can expect to see more sunburn, more social stress, cancer and the spread of new diseases.