Educators in Nunavut, Nunavik earn national recognition for their efforts 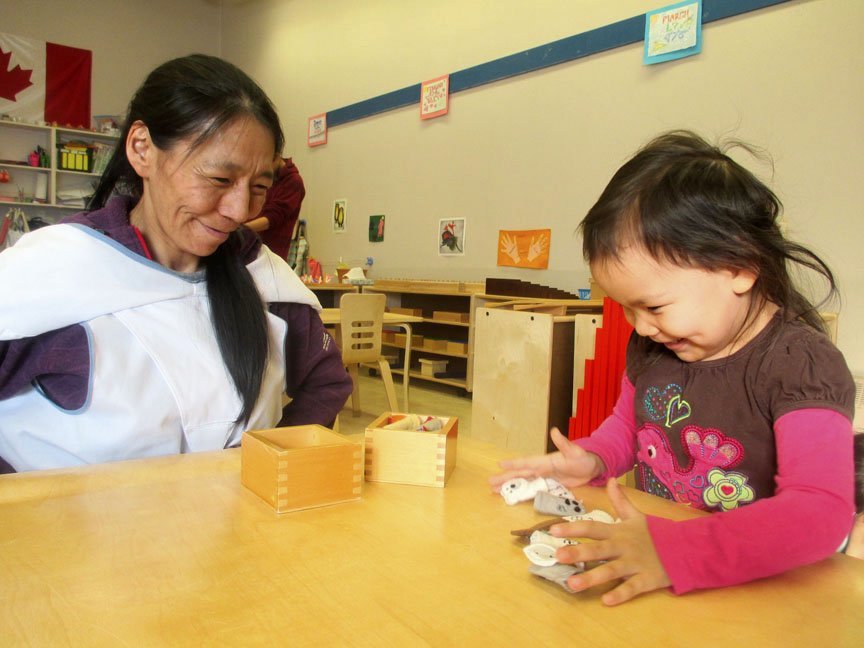 Leah Kippomee, recipient of a 2020 Prime Minister’s Award for Excellence in Early Childhood Education, helps preschooler Sonia Rae Enookolo work with finger puppets in this photo from 2017. “Leah’s use of Inuktitut and cultural engagement in the preschool environment allows children to thrive, and provides them with a positive first engagement in education that will affect their lives for years to come,” said her nominator for the award. (Photo courtesy of Tessa Lochhead)

Leah Kippomee, a preschool teacher at the Pirurvik Preschool in Pond Inlet, has received a Prime Minister’s Award for Excellence in Early Childhood Education.

Kippomee was one of five who received national Certificate of Excellence awards, selected from applicants across Canada.

The recently announced award honours Kippomee and the others “for their leadership, exemplary early childhood education practices and their commitment to help build the foundation children need to make the best possible start in life.”

According to a backgrounder on her award, Kippomee uses a child-centred approach, based on traditional knowledge and enriched with Montessori materials.

As a preschool teacher, Kippomee tries to help overcome the legacy of the residential schools, the backgrounder said.

“Leah’s use of Inuktitut and cultural engagement in the preschool environment allows children to thrive, and provides them with a positive first engagement in education that will affect their lives for years to come,” said her nominator.

Kippomee will also receive a letter and a certificate signed by Prime Minister Justin Trudeau.

In 2018, the Pirurvik Preschool, where Kippomee is the lead teacher, won the $1-million Arctic Inspiration Prize.

As a result, Kippomee is now able to share her expertise with seven other Nunavut communities.

Kippomee’s approach to early childhood education is based on Inuit Qaujimajatuqangit traditional knowledge—in particular Pilimmaksarniq, the principle of allowing children to learn at their own pace—and the educational principles of the Italian educator Maria Montessori.

At the Pirurvik Preschool, staff members introduce hands-on learning materials to children when they are ready.

Much of the daily program involves cultural materials and activities, such as sealskin scraping and stretching, playing string games and bone games, or telling stories with a felt board or finger puppets.

Kippomee and the others at Pirurvik use Inuktitut at the preschool when sharing stories.

The preschool’s goal is to encourage parents to exchange their thoughts with their children, as well, so they read stories to their children and play games with them to develop language skills. 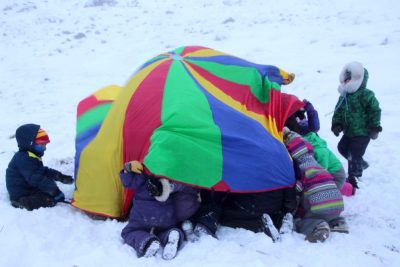 Other northern educators were also honoured with the Canadian Network for Environmental Education and Communication 2020 Awards of Excellence.

The awards recognize educators and organizations that have helped advance environmental learning, ensure Canadians are “environmentally literate,” and contribute to a healthy and sustainable future.

Nanook’s Nuna is “the first tundra land-based kindergarten to Grade 2 school program in Canada,” where students are out learning on the land every day. “Students are sick less often, have improved balance and stamina, work well in teams and develop their problem solving, social thinking and community skills,” the backgrounder on the award said.

And Ikaarvik, the youth research program started in Pond Inlet, won in the Outstanding Youth Action Organization category. The program “empowers Inuit and northern First Nations youth to explore ways that Indigenous knowledge and western science can work together,” said the backgrounder.

No Nunavut teacher was nominated this year for the prime minister’s teaching excellence award, said a statement from Innovation, Science and Economic Development Canada.

“Nominations are now open for the 2021 awards and we encourage parents, students and community members to nominate a teacher or early childhood educator today.”