Condo building originally included social-housing component, which has since been cut from project 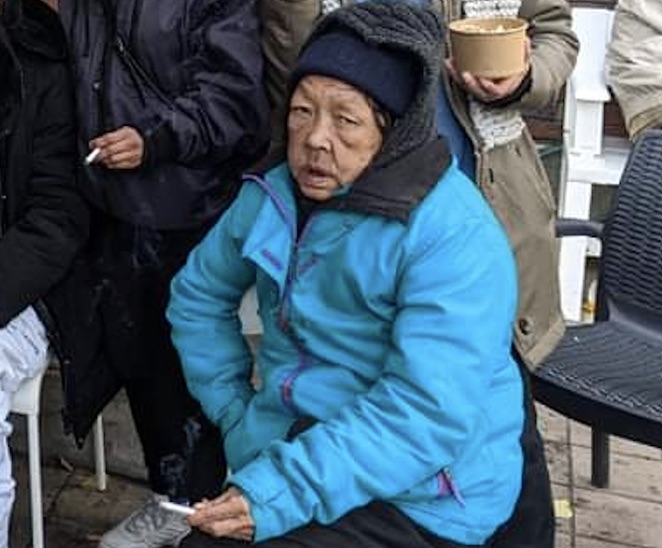 Elisapie Pootoogook, older sister of the late artist Annie Pootoogook, has died in downtown Montreal after seeking shelter in a condo building site that was originally meant to include social housing.

Pootoogook, 61, was found dead Saturday morning in a construction site on René Lévesque Boulevard near Atwater Avenue in the Ville-Marie Ouest ward of the city, police confirmed.

Const. Caroline Chevrefils said Montreal police received a call at 8:20 a.m. on Nov. 13 that a woman was found unresponsive on the site.

“We were able to determine there was no criminal element to this event,” Chevrefils said.

The coroner’s office is now looking into an official cause of death.

Pootoogook’s husband, Noah Koperqualuk, told Nunatsiaq News that his wife had meningitis and had been in the hospital for treatment. He added that her name was Elisapie, officially, but she preferred Elisapee and often went by it. He last spoke to her by phone on Friday, the day before she died.

Pootoogook died at the site of the former Montreal Children’s Hospital, which is now under construction to become a condo development and a community centre in 2023. Original plans for the building included 174 social housing units to help address the city’s housing crisis but are no longer included in the development, according to media reports about the project.

Community groups are now calling for a public inquiry into how that social housing component disappeared. A legal battle between the developers, Devimco Immobilier and High-Rise Montréal, and the city is now ongoing.

There are plans to include a cultural centre within the condo building which the City of Montreal announced last January will be named Sanaaq, after the novel by Inuk author Mitiarjuk Nappaaluk. Originally written in Inuktitut syllabics in the mid-1950s, Sanaaq tells the pre-settlement story of an Inuit family and their day-to-day life repairing clothing, building shelters and harvesting food.

David Chapman is the project co-ordinator for Resilience Montreal, a day shelter that Pootoogook frequented downtown.

Chapman said it’s “appalling” that an Inuk woman died on the site of a building that was meant to house people seeking help, and that will be named in part after an Nunavik Inuit novel.

“There are a number of ironies here,” he said.

Chapman knew Pootoogook for about eight years and had helped her travel back to visit family in Nunavik several times over the years. She would often make the trip down to Montreal for health-care treatment.

“After her treatment was finished, she would come to see friends in Montreal, but often this would end with her living on the street,” Chapman said.

He said many people from Nunavik come to Montreal because of the high cost of living in the North, health-care purposes or just in the hopes of seeking new opportunities in the city.

“Montreal can seem like the land of possibility… but it doesn’t always work out that way,” Chapman said.

He remembered Pootoogook as a “lovely person” who was always excited to speak with her grandchildren on the phone, often exclaiming, “Oh my stars!” when she was surprised, said Chapman.

It was clear however that life had not been easy for her, he said.

Community organizers announced Tuesday that a memorial will be held for Pootoogook on Nov. 22 at 1 p.m. in Montreal’s Cabot Square.

The death of Pootoogook comes five years after her sister Annie died in Ottawa in 2016 at the age of 47. A park in the city was recently renamed after the famed artist.