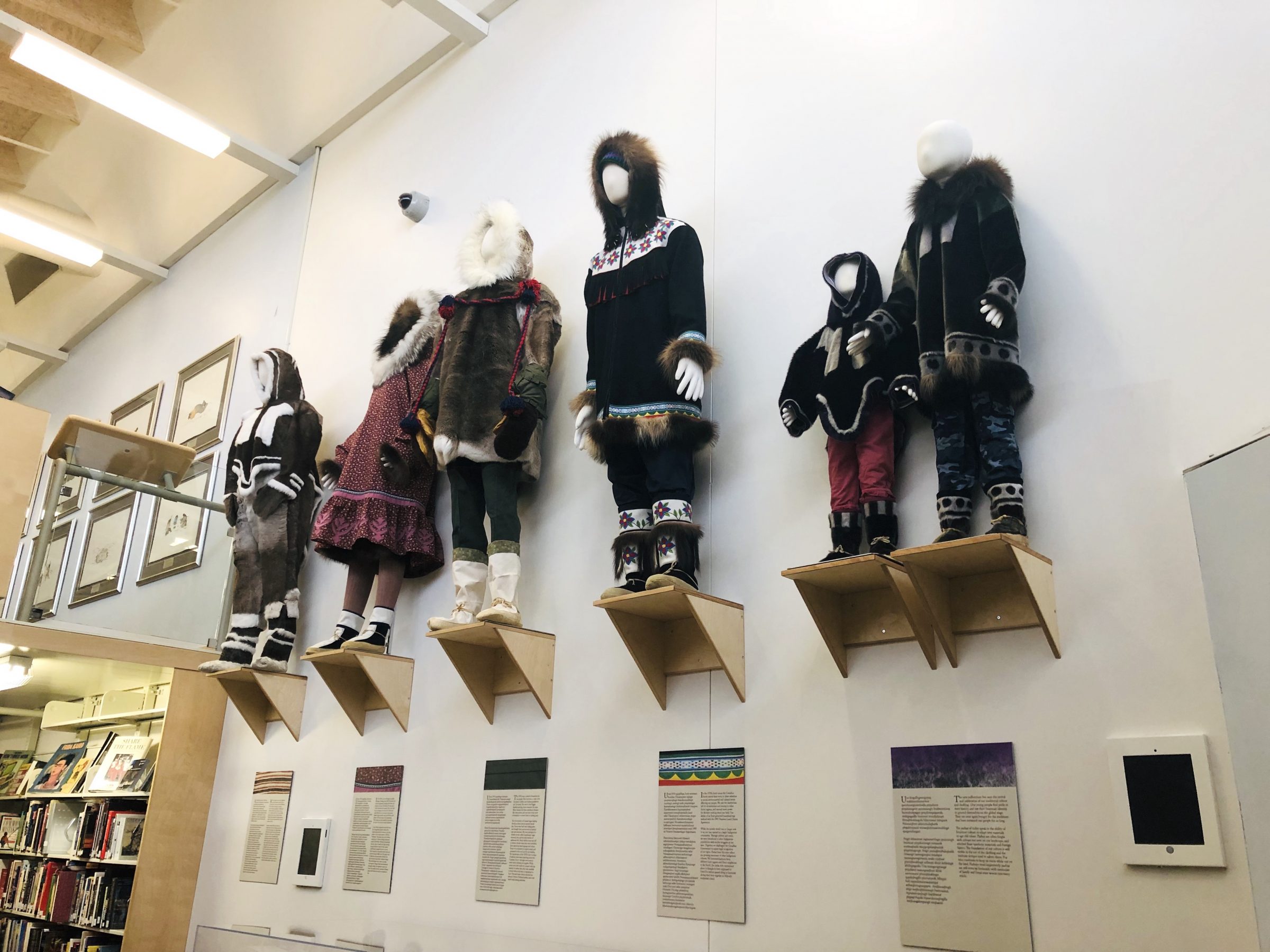 The Inuinnait parkas in the Patterns of Change exhibit are on display at the May Hakongak Cultural Centre in Cambridge Bay, but you can also learn all about the exhibition and the parkas in a virtual version of the exhibition. (Photo by Jane George)

CAMBRIDGE BAY—If you are lucky enough to be in Cambridge Bay, you can take in the new Patterns of Change exhibit at the May Hakongak Cultural Centre in person.

But even if you’re not in this western Nunavut hub, you can still see the entire exhibition online.

The two-year project that resulted in the exhibition looked at the history of Inuinnait parkas and produced six parkas with period equipment, materials and techniques.

With the exhibition, the Pitquhirnikkut Ilihautiniq/Kitikmeot Heritage Society says it wanted to show how clothing and fashion speak to broader changes in Inuinnait culture over the last 150 years.

To that end, elders-in-residence at the centre recreated six historical Inuinnait parkas through community sewing workshops.

Each parka represents a different stage of Inuinnait history, from pre-contact to today.

While preparing and sewing the parkas, Cambridge Bay elders also recreated tools and materials from each specific time period to process hides, create patterns and sew the parkas together, PI said in the display.

The materials were harvested from the land, and the sewing tools were made from locally sourced copper, PI said.

You can see these at the May Hakongak Cultural Centre, as well.

When arranged together, the parkas and tools “provide insight into how Inuinnait have grown in new directions, while still anchored in the land, resources and people that make them who they are,” PI said.

The exhibition also comes with a guide, which you can download online in English and Inuinnaqtun, that contains lots of detail and some surprising information.

For example, you might think that Mother Hubbard parkas are traditional to this part of the western Arctic, but they weren’t seen in this region until the 1920s.

The style began with the Klengenberg family, who moved into the Inuinnait region in 1916 to open a trading post in the area near today’s community of Kugluktuk, the guide tells.

Christian Klengenberg originally came from Denmark, but his wife Kenmek was an Inupiaq from Alaska.

She found the short sleeved and short-waisted fur parkas of the Inuinnait too cold, so Kenmek continued to sew the longer parkas , and “the style gradually took hold,” the guide tells.

“Initially, only the wealthiest families could afford to purchase enough cotton material to make the longer, Mother Hubbard parka style, and it immediately became a sign of wealth and high standing amongst Inuinnait,” the guide says.

That’s because only the best hunters could harvest enough fox furs to buy the material needed for the parka’s cotton cover, and interior lining of duffel wool.

Another big change was residential schooling, which exposed Inuinnait to a wider community of Indigenous people, and brought with it a Gwich’in-influenced parka style with embroidered shoulders and with fringes and a flower motif.

The exhibit is also accompanied by an interactive community sewing pattern library, designed to encourage public tracing, borrowing and the exchange of patterns.

To celebrate the recent launch of the exhibit, Patterns of Change, PI is also reaching out to members of the public for images of parkas from over the years up to the present day.

If you’re interested in sharing a photo of a parka, PI says you can upload the photo on to Facebook or Instagram, tell a little bit about it, and then tag PI with #patternsofchangeparkas in your post, or, send it by email to info@kitikmeotheritage.ca.

The new exhibition is just one of PI’s cultural efforts, which include Inuinnaqtun revitalization plans and Nunavut’s first Inuit-owned coffee company: Kaapittiaq.

Along with those efforts came the recent awarding of the annual Inuit Cultural Repatriation Award from from Inuit Tapiriit Kanatami to PI which was accepted on its behalf by executive director, Pamela Gross..

This award is presented to organizations and individuals who demonstrate leadership in recognizing and respecting Inuit cultural rights.