Extra hours, extra stress: A look at life under lockdown for Arviat’s retailers

‘When you go through a 3-month lockdown, it’s very difficult,’ says manager of Northern store 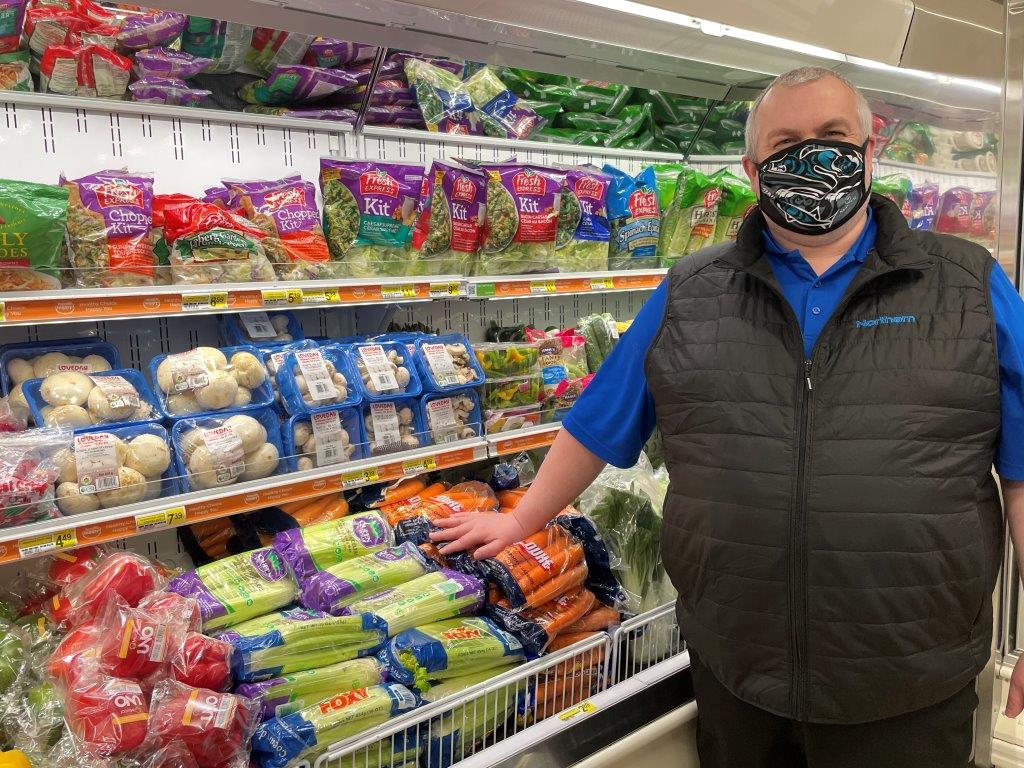 Darren Price, the manager of the Northern store in Arviat, says staff rallied to get through three months of strict public health measures. But it sometimes came at a heavy personal cost. (Photo courtesy of Darren Price)

It’s been a hard winter in Arviat.

The Nunavut government reported Saturday that there are now zero active cases of COVID-19 in the community of about 3,000, after 339 infections and one death since last November.

The outbreak forced the community into a lockdown that lasted several months, with one small reprieve in January.

A well-used social media hashtag, #ArviatStrong, draws on #Bostonstrong, which was popularized after the 2013 Boston marathon bombing.

But now, like runners in a marathon, Arviammiut are tired.

Darren Price, manager of the local Northern store, experienced the pandemic as an essential worker. His job was to make sure shelves were stocked and people had access to what they needed through the lockdown.

“I probably aged 10 years through this,” he said.

“It would be good to be able to talk about it to get out, to get over the shock to the system.”

Fortunately, the sealift had left the store with enough supplies to last through the pandemic.

But Price described the worst day of the past three months as when 13 of the store’s 70 employees were unable to show up for work due to quarantine measures.

“We were all pulling extra shifts. The whole team pulled together through that,” Price said. “People think we’re untouched, but behind the scenes are things people don’t see.”

Price said he often felt scared during the outbreak.

“I would never have forgiven myself if had had brought COVID home,” he said.

Price lives with his wife, along with their daughter, her partner and their young child.

He also has a son, who he only saw a couple of times when the lockdown restrictions briefly lifted. His son lives in Arviat, but in his own home.

On Sundays, Price would bring him supper over because he couldn’t join the rest of the family due to the lockdown restrictions on visiting between households.

“We would drop him off a plate of food and see him come out of the house and not be able to run up to him and give him a hug,” Price said, adding that just retelling that weekly routine of isolation made him “teary-eyed.”

The Northern store staff also rallied to observe all the recommended public health measures, as did the customers, Price said.

But that wasn’t always easy.

“The elders come in and they want to shake your hands and it hurts [not to],” Price said. 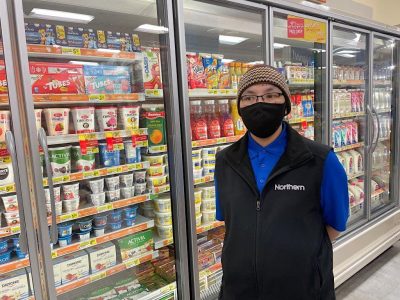 Lisa Issuamatardjuak, the administrative supervisor at the Northern store in Arviat, says she moved in with her parents to make sure her two daughters would be cared for while she went to work. (Photo courtesy of Darren Price)

Lisa Issumatardjuak, the store’s administrative supervisor, said she didn’t miss a day at work during the outbreak.

But, in order to do that, she had to move in with her parents so she would have childcare for her two girls.

“Throughout this lockdown I made sure I stayed in one place with my girls,” Issumatardjuak said.

After work, she made sure she washed her hands and clothes to protect her children from any contact with COVID-19. 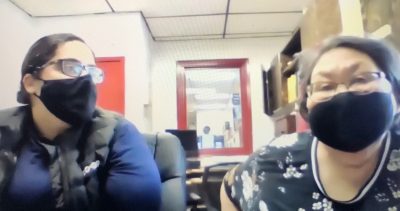 Padlei Co-op Manager Farah Abdul Razzaq and Winnie Mall, the president of Arviat’s co-operative association, talk via Zoom about the hard moments of the past three months. (Screen shot)

With the arrival of COVID-19 in Arviat, Padlei Co-operative store manager Farah Abdul Razzaq said “there was some panic and fear.”

The public health protocols were in place at the store, but the COVID-19 outbreak left Razzaq to juggle two jobs because the closure of schools meant her daughter, six, remained at home with either her or her husband.

“I reassured the staff that we would do everything we could do to keep people safe,” Razzaq said.

And she gave her daughter a similar message of reassurance at home.

For Winnie Malla, the president of the co-operative association, the hardest part was not seeing her grandchildren.

“They usually come to me every day after school, but they didn’t come for three months,” Malla said.

Malla used to tell herself that everything would be OK.

“I think everyone will keep on being careful,” Malla said, so that there will be no more positive cases of COVID-19 in the community.

The hamlet’s senior administrative officer, Steve England, told Nunatsiaq News that local retailers were “heroes” because they kept the doors open during the pandemic.

“But they were the leaders,” Price said of the SAO and Mayor Joe Savikataaq Jr.

Hamlet officials held regular meetings with the managers of the Northern and Co-op store and the independent retailer, the Arctic Connection.

“We were able to work together to form a united front on how we were going to operate our businesses,” Price said.

It was “really remarkable” how the entire community came together, he said.