“Let’s stand together to break the silence on family violence and abuse in Nunavut,” says campaign by Pauktuutit and Law Society of Nunavut 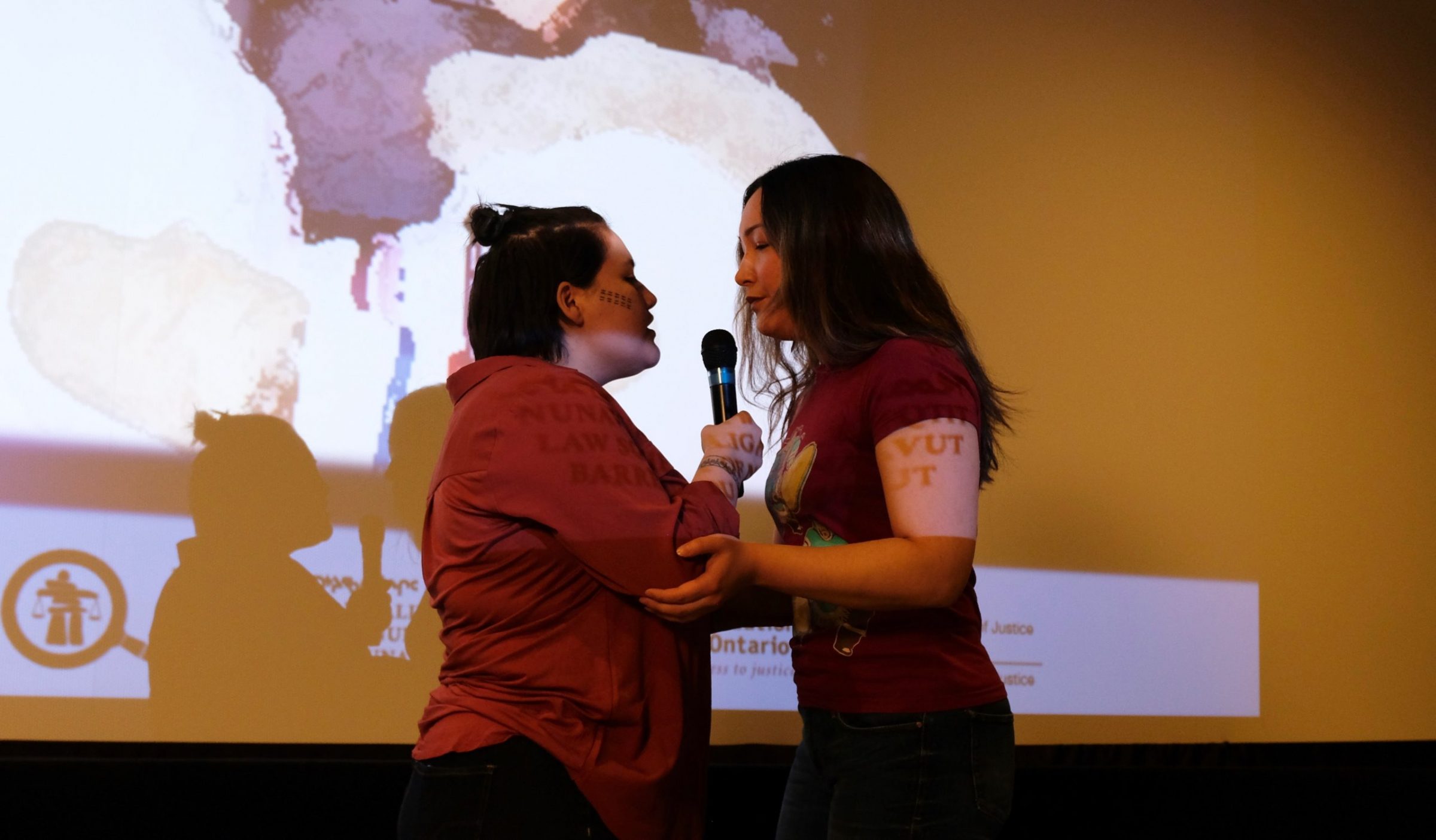 Iqaluit throat singers Olivia Chislett and Kristen Kownak perform at the launch of a campaign against family violence at the Astro Theatre in Iqaluit on Monday, International Women’s Day. (Photo by Mélanie Ritchot)

Pauktuutit Inuit Women of Canada and the Law Society of Nunavut launched a campaign on Monday to help address family violence in the territory.

The event, which happened on International Women’s Day at the Astro Theatre in Iqaluit, began with a qulliq-lighting ceremony and was attended by approximately 50 people who took a moment to honour those lost to family violence in Nunavut.

“Each of us can identify someone in our lives who has been affected by family violence,” said John Maclean, president of the Nunavut Law Society.

“Maybe it’s a member of our family, maybe it’s someone we love … maybe it’s a colleague who comes to work with a bruise they didn’t have on Friday night.”

He said the law society’s goal is to start conversations among Nunavummiut about what family violence is, how to recognize it, and what can be done to address it.

The campaign includes educational podcasts, a Facebook page, and printed educational resources like posters and brochures sent to communities across the territory.

Campaign materials call on residents to “stand together to break the silence on family violence and abuse in Nunavut.”

Community visits will also be done and a new toll-free helpline has been made available by the Department of Justice.

“It is not easy,” said Elisapee Sheutiapik, the minister of family services and former president of Pauktuutit. “As long as I’ve worked on this … I still lost another person two years ago and I hope I will have more tools to save another life this time.”

Before creating the campaign, in 2019 the law society and Pauktuutit interviewed 38 Inuit women in seven Nunavut communities about family violence, to find out what kind of support they needed and what kind of legal barriers they face.

They found the women often turned to their families, community and elders first for help.

Some interviewees also said they felt the legal system may help abusers more than them and expressed concerns about RCMP response times when calling about abuse.

The organizations found that Nunavut needs more emergency shelters, both for shelters for women and children fleeing violence and for abusers ordered to leave the home. They also found a need for culturally sensitive training for social workers to help support Inuit families.

Chief Superintendent Amanda Jones, the first female commanding officer of the RCMP’s Nunavut division, spoke at the event and stated her support for the campaign.

A free public event will be held at the theatre Tuesday at 6 p.m., where the films Wounded Healers by Inuk Romani Makkik and Tony: Back From the Brink will be screened.