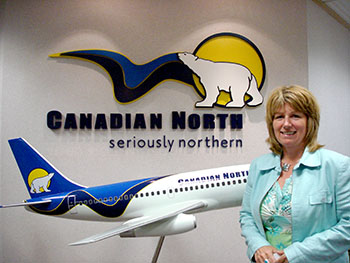 Kelly Kaylo, vice-president for passenger product and sales at Canadian North, hopes Nunavummiut traveling between Yellowknife and Edmonton will remain loyal to the airline. Canadian North serves many Nunavut communities and is 50 per cent owned by Nunavut Inuit through Nunasi Corp. The Yellownife-Edmonton route supplies the airline with up to 30 per cent of its revenue, but that’s now threatened by competition from new players like Westjet. (PHOTO BY JANE GEORGE)

Westjet decided earlier this month to expand its daily, non-stop service between Edmonton and Yellowknife from seasonal to year-round as of November 1, calling the move a “strategic decision.”

The increased competition for air traffic comes at a time when the two northern airlines already face declining passenger numbers and higher costs.

There’s less mining activity and tourism in the northern territories, the southern economy is poor, and many travellers are staying home this summer because they’re worried about money or catching H1N1, say the airline’s top managers.

A one-way ticket on Westjet starts at $99, not including taxes and surcharges.

The other three airlines that fly the Yellowknife-Edmonton route — Air Canada Jazz, Canadian North and First Air — have scrambled to match this price or beat it, even if they don’t think the increased number of seats or Westjet’s low fares are sustainable over the longer-term.

While it would be “naïve” to think the lucrative Yellowknife-Edmonton market would remain in the hands of northern airlines forever, the current competition still hurts, said Kelly Kaylo of vice-president for passenger product and sales at Canadian North.

A better schedule and better customer service might encourage Nunavummiut traveling through Yellowknife to remain loyal to Canadian North, an airline that employs locals, supports community events and offers discounts to its owner beneficiaries, Kaylo said.

That same hope is found at First Air where Ferris said he’s been “really pleasantly surprised” to see support for the airline, especially in Yellowknife, where it employs 200 workers.

So, losses on the Yellowknife-Edmonton route could eventually affect on the two airlines’ more fragile northern air routes.

Westjet is now flying a larger aircraft with a capacity of more than 100 passengers, which has boosted the total number of seats of the Yellowknife-Edmonton route to more than 5,000 a week.

WestJet may be content to lose money on the route just to take business away from Air Canada, some observers say.

Not that the situation for airlines in general is bright. The International Air Transport Association said last week that the numbers of air travel numbers continue to nosedive and fears of a prolonged recession and rising fuel prices have caused “renewed pessimism” for airlines.

However, the result for air travelers is that, at least for now, airfares have never been lower.

At the same time that Canadian North and First Air face pressure on their Yellowknife-Edmonton routes, some also want to see Westjet fly into Nunavut.

There’s also an email campaign currently circulating around Nunavut urging people to ask Westjet to fly into Nunavut, although the airline has said it has “no immediate plans to offer service from Nunavut.”