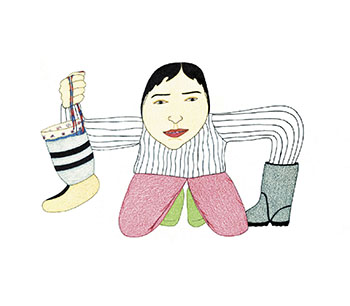 “Holding Boots”  by Annie Pootoogook is on display at her solo exhibition at the National Museum of the American Indian in New York City. 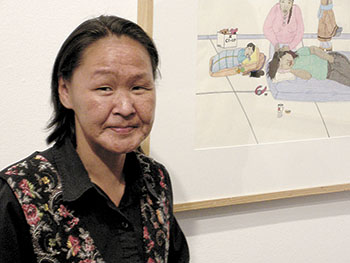 Annie Pootoogook, an artist known for her images of today’s life in the Arctic, speaks at the opening of the exhibition, “Burning Cold,” now at the Ottawa Art Gallery. (PHOTO BY JUSTIN NOBEL) 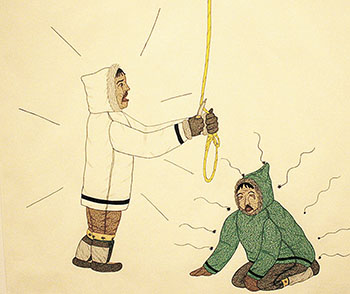 A detail from “Hanging” by Annie Pootoogook, included in her solo exhibition at the National Museum of the American Indian, depicts what seems like a narrowly averted suicide. Several New Yorkers were moved by the drawing, and took time to discuss the artist’s intentions. (PHOTO BY JUSTIN NOBEL) 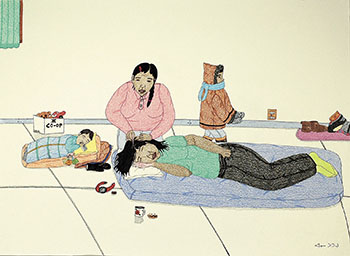 “Picking Lice” by Annie Pootoogook  is now on display at the Ottawa Art Gallery, part of an exhibition called “Burning Cold.”  (COURTESY OF THE OTTAWA ART GALLERY)

NEW YORK CITY — Within sight of New York City’s Statue of Liberty is a gallery with art from Nunavut. Straightforward, coloured drawings depict an Inuit mother and daughter wrestling, an Inuit man lifting a two by four against his wife and a woman with an ulu, cleaning a skin.

Nearly 40 of her drawings are on display at the National Museum of the American Indian in New York City through January 10.

Pootoogook’s work is also included in an exhibit called “Burning Cold” at the Ottawa Art Gallery on display through August 30.

“There is no one in the history of Inuit art with her style,” said Pat Feheley, who runs Feheley Fine Arts, a Toronto Gallery that specializes in Inuit art.

Pootoogook is known for her realistic portraits of northern life, which show everything from family violence to a red bra or hunters dividing up a whale.

Her drawings and prints talk about life in today’s Arctic, a world with television, soda pop, video games, clocks and light switches.

Pootoogook could not make it to New York, but Feheley was one of about 80 people who attended the Museum of the American Indian opening earlier this month.

The crowd included New Yorkers, in spiffy dresses and fanciful hats, as well Canadian art connoisseurs, such as Wayne Baerwaldt, director of the Power Plant, a contemporary art gallery in Toronto where Pootoogook’s work was shown in 2006, to much fanfare.

Earlier in the day, Baerwaldt had seen a retrospective of Francis Bacon, a 20th century Irish painter, at the Metropolitan Museum of Art.

Baerwaldt said he was struck by the similarities between Pootoogook’s work and that of Bacon, whose haunting figures are often set against flat, white nondescript backgrounds.

“Inuit art work should not be ghettoized, and put under the stairwell of a museum,” said Baerwaldt.

Attendees sipped wine and snacked on small pieces of shrimp and steak in a large, lavish room with a domed ceiling, then drifted into the gallery.

In the exhibition hall’s main room, two smiley, well-dressed women who worked as docents at the museum discussed the art.

“You see so much National Geographic stuff, but I don’t think I realized how primitive they are,” said Christine, who wore a grey dress and spoke with a European accent. She was looking at a drawing that showed an Inuit woman chewing on a skin to soften it for sewing.

The pair moved onto a drawing called “Hanging.” A man in a green parka kneels beside a noose, a single tear welling in each eye. Another man is cutting the noose down.

“I think he has saved him,” said Christine.

“But I am not convinced,” said her friend Lenore, who was in a green top with a black scarf.

“I think children, especially, will be attracted to her work,” said Christine. “Because they draw like this and use colours like this.”

“The technique is engaging,” added Lenore. “It is a simple technique, but presented in a very complex manner.”

In a small room off the main exhibit a short video about Pootoogook played. It was filmed in Cape Dorset and opens with a raging blizzard.

At one point, Pootoogook playfully sticks out her tongue, which got at least a few New Yorkers smiling.

Pootoogook was missed at the New York show, but, on June 19 at the Ottawa Art Gallery, she spoke for about 10 minutes. For Pootoogook, who is typically shy and terse, it was a long talk.

“I was nervous,” said Pootoogook, “but when I started talking I wasn’t nervous at all.”

Pootoogook learned to draw from her grandmother, Pitseolak Ashoona, and her mother, Napatchie Pootoogook.

Her own work has been described as a combination of the two, drawing stories much in the way Pitseolak did, and focusing not just on the pleasant aspects of Inuit culture, but also the darker side, as Napatchie started to do toward the end of her career.

“It makes me feel better,” said Pootoogook, when asked why she drew about issues like spousal abuse and suicide. “It’s better to put them on paper and I’m not going to think about it anymore. I have to let them out from my heart and put them on paper.”

Pootoogook lives in Ottawa, and said she enjoys traveling to new places for her art, but that her favourite shows are still the ones back in Nunavut.

“I miss home because I didn’t go home since last year,” said Pootoogook. “I don’t have money to travel there, so I don’t know when I’m going to go back home.”

Despite Pootoogook’s absence, she has left a lasting impression in Cape Dorset, where female members of her family continue to pursue careers in art, once thought impossible for Inuit women.

“The fact that her work not only sold but was so celebrated has given freedom to her contemporaries,” said Feheley.

You can see Annie Pootoogook’s at the Burning Cold exhibition inside the Ottawa Art Gallery Arts Court, 2 Daly Avenue, Ottawa, from Tuesday to Friday, 10 am to 5 pm, Thursdays, 10 am to 8 pm, and Saturday and Sunday, noon to 5 pm. Admission to the Gallery is “pay-what-you-can.” 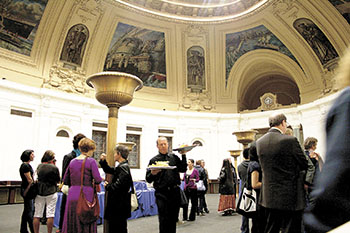 Art lovers gathered at the opening of a solo exhibit by Annie Pootoogook in New York City. Nearly 40 of her works are on display in an exhibition gallery off this ornate rotunda in the National Museum of the American Indian. (PHOTO BY JUSTIN NOBEL)