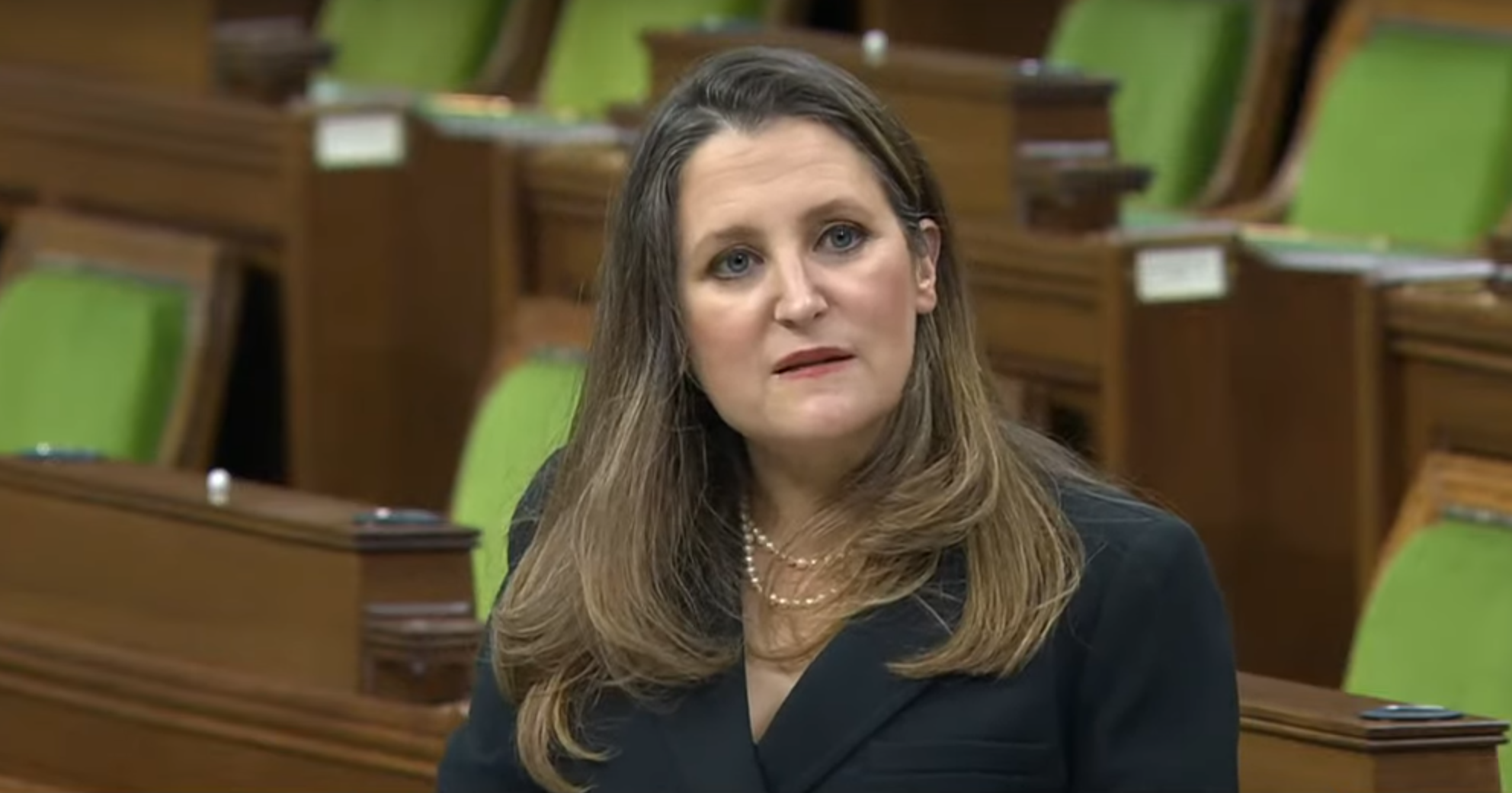 Canada’s Finance Minister Chrystia Freeland presents the federal budget for 2021-22 on Monday in the House of Commons. (Screenshot from CPAC livestream)

Twenty five million dollars has been allocated to housing in Nunavut, federal Finance Minister Chrystia Freeland announced in her budget address on Monday — the Liberal government’s first in two years.

Other budget highlights focused on life in the North include $1 billion for the Universal Broadband Fund, and more funding for Inuit women’s shelters, Inuit children’s early education and post-secondary education for Inuit women.

The $25 million dedicated to housing will go to the Government of Nunavut to support short-term housing and infrastructure needs, including about 100 new housing units.

The territory has an immediate need for 3,000 new housing units, according to a report by the GN.

Freeland said the government recognizes “access to safe and sustainable housing can be particularly challenging in the North.”

“In August, Nunavummiut shared their experiences related to housing … the devastating impacts of a lack of safe space results in frustration, stress and in the worst case, death,” the tweet read. “The federal government knows this, [Nunavut Tunngavik Inc.] asked for $500 million … what did Budget 2021 say? $25 million.”

Qaqqaaq, an NDP MP referred to a request NTI made in 2020 for its own Inuit-specific housing program, which wouldn’t be run through the GN — as the new funding will.

The federal government committed $1 billion for the Universal Broadband Fund over six years , to get high-speed internet in rural and remote communities. There are no specifics about how much will be allocated to Inuit or northern communities.

A fund of $18 billion will go towards supporting “healthy, safe, and prosperous Indigenous communities, and advance reconciliation with First Nations, Inuit, and the Métis Nation.” Details were not provided on how this money will be spent and how much will go to Inuit.

Over $6 billion was pledged for infrastructure in Indigenous communities, and $2.2 billion to help address missing and murdered Indigenous women and girls.

Pauktuutit Women of Canada president Rebecca Kudloo said she is pleased to see the funding for shelters for Inuit women.

“Overall, Budget 2021 demonstrates the federal government is accelerating action to address the urgent needs of Inuit women” Kudloo said in a news release.

Budget highlights on the national level include $30 billion for a new child-care plan and increasing the minimum wage for workers in federally regulated industries to $15 per hour across the country.

This was the first budget since the COVID-19 pandemic began and the bulk of the spending was aimed at helping Canadians get through the pandemic, including wage subsidies and help for small businesses.

“Indigenous peoples have led the way in battling COVID,” said Freeland. “Their success is a credit to Indigenous leadership and self-governance”

The 2021 budget, called A Recovery Plan for Jobs, Growth, and Resilience, outlines $101 billion in new spending and a deficit predicted to drop from $354.2 billion to $154.7 billion over the next fiscal year.