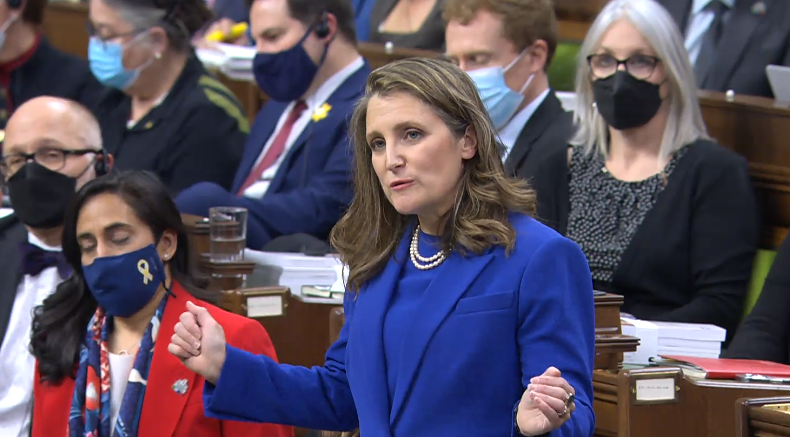 The 2022 federal budget is promising millions of dollars for housing in Inuit communities and the modernization of Arctic defence, among other northern investments.

Deputy Prime Minister and Finance Minister Chrystia Freeland tabled the budget, titled A Plan to Grow Our Economy and Make Life More Affordable, in the House of Commons Thursday.

Inuit communities across Canada are also set to receive an additional $845 million over seven years in housing support. That comes from a proposed $4 billion in housing services through Indigenous Services Canada and Crown-Indigenous Relations and Northern Affairs Canada.

Freeland addressed the challenges of providing specific housing solutions in her speech.

“There is no silver bullet which will immediately, once and forever, make every Canadian a homeowner in the neighbourhood where they want to live,” she said.

On defence, the budget repeats a 2021 commitment to spend $252 million over five years “to sustain existing continental and Arctic defence capabilities” and to modernize the North American Aerospace Defence Command.

Also in the budget, $14.5 million over five years is proposed “to support the completion and operations” of the Canadian High Arctic Research Station, located in Cambridge Bay.

She concluded her address by highlighting the bravery of the Ukrainian people which she said has inspired Canadians during Russia’s invasion.

Conservative interim Leader Candice Bergen panned the budget over what she called “out of control spending,” in a scrum outside the House of Commons while Freeland was speaking.

“Well, we are seeing an NDP budget, delivered by an NDP-Liberal government,” Bergen said, referring to an agreement the two parties reached last month that will see the NDP support the Liberal minority government in Parliament until 2025.

Lori Idlout, Nunavut’s NDP MP, said in an interview with Nunatsiaq News she is “decently satisfied” from what she’s read in the budget – a far cry from her previous statements calling on the Liberals to do more on housing and reconciliation.

Idlout specifically praised the Liberals on their housing and mental health investments, but said a $5.1 million investment to the RCMP to support community-led responses to unmarked burial sites at former residential schools was “strange.” She said the money should go directly to communities.

Idlout said she will support the budget, and that her fellow NDP MPs deserve credit for influencing the Liberals to address some of their legislative priorities.

“Twenty-five NDP MPs were quite effective in their relationship-building with the Liberal government,” she said. “This is just the beginning, we’re going to be fighting for more.”

Sylvie Bérubé, the Bloc Québécois MP for Abitibi—Baie-James—Nunavik—Eeyou, was less satisfied with the budget.

Although she said she was happy Nunavik Inuit communities would benefit from some of the housing investments, she said the budget lacked clear solutions on climate investments, inflation and health transfer payments to Quebec.

She and her party do not plan to support the budget.

“There’s no relief currently for the Québécois population and the cost of living, so we’ll vote against,” she said in a French language interview.