Benefits agreement should be ready by next April 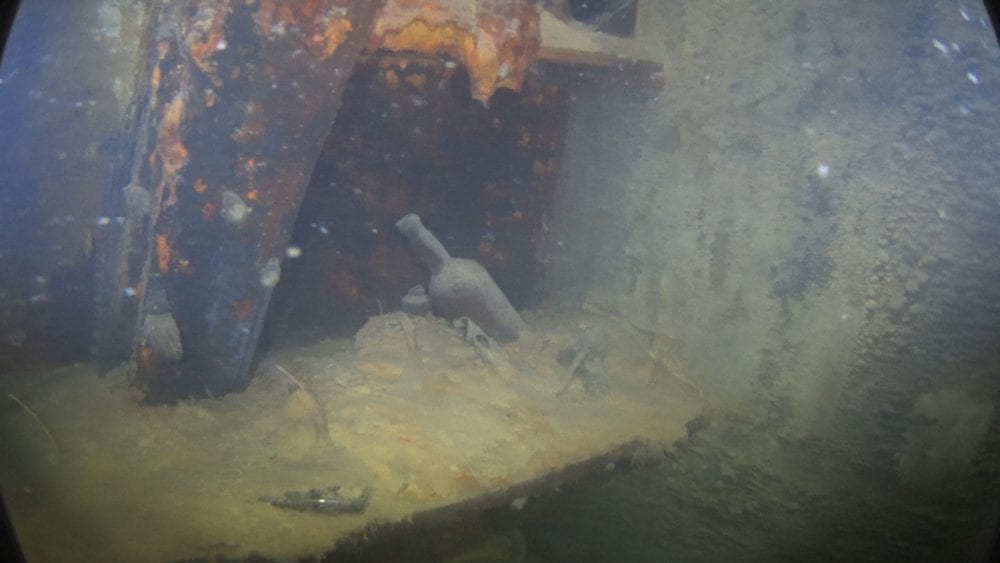 Bottles and other objects on a shelf in a cabin on HMS Terror’s lower deck can be seen in this photo taken during the summer of 2019 by Parks Canada. (Photo courtesy of Parks Canada)

CAMBRIDGE BAY—Due to the timing of the upcoming federal election, the Kitikmeot Inuit Association says it has not been able to conclude negotiations of the Inuit Impact and Benefit Agreement for the national historic site of the wrecks of HMS Erebus and HMS Terror near Gjoa Haven.

“We are close to finalizing the agreement, however, federal departments are not able to make government commitments during an election process in case there is a change of party in power,” said Fred Pedersen of the KIA’s communications department.

But the delay in finishing off the IIBA may be a good thing yet, he said, as it means negotiators may be able to seek additional benefits from recent discoveries at the sites.

“In the end this may prove to be beneficial to us, as during this year’s archeology season the wreck of the Terror was found to be in a remarkable state,” Pedersen told the AGM in Cambridge Bay last week.

The number of interesting items from the doomed 1845 Sir John Franklin expedition has increased: the drawers and cupboard doors are still closed in the captain’s cabin and many artifacts are still in the same location where they would be if the ship was used today, Pedersen said.

The plan now is have the IIBA ready by April 1, 2020, about a year later than Pedersen had predicted last year.

When the IIBA is signed, the wrecks of HMS Erebus and HMS Terror will become the first national historic site in Canada that Inuit will manage on behalf of Parks Canada through a contract with the KIA.

The wreck of the Erebus had already been included in 2015.

The formal signing of the IIBA means that money will start to flow from the initial $16.9 million that was earmarked in 2016 for the search for the Terror and for a visitors centre in Gjoa Haven.

The visitors centre would be an addition to the existing Nattilik Heritage Centre in Gjoa Haven, for which the KIA will get operational funding.

In an update on the second edition of the IIBA for the National Wildlife Areas and Conservation Areas, Pedersen said the Pitquhirnikkut Ilihautiniq heritage society in Cambridge Bay will get money to build a new facility for its collections and activities when that agreement is implemented.

This past summer the IIBA for Canadian Heritage Rivers was signed, worth $6.5 million over seven years for four Nunavut rivers: the Kazan River (Sarvaqtuuq), the Soper River (Kuujuaq), the Thelon River (Akillinik) and the Coppermine River (Qurluktuk).

For the Coppermine River, the KIA received $2.8 million over seven years, which it plans to use for a water-monitoring program for the river, a celebration of the river’s new status and annual celebrations for youth and elders.