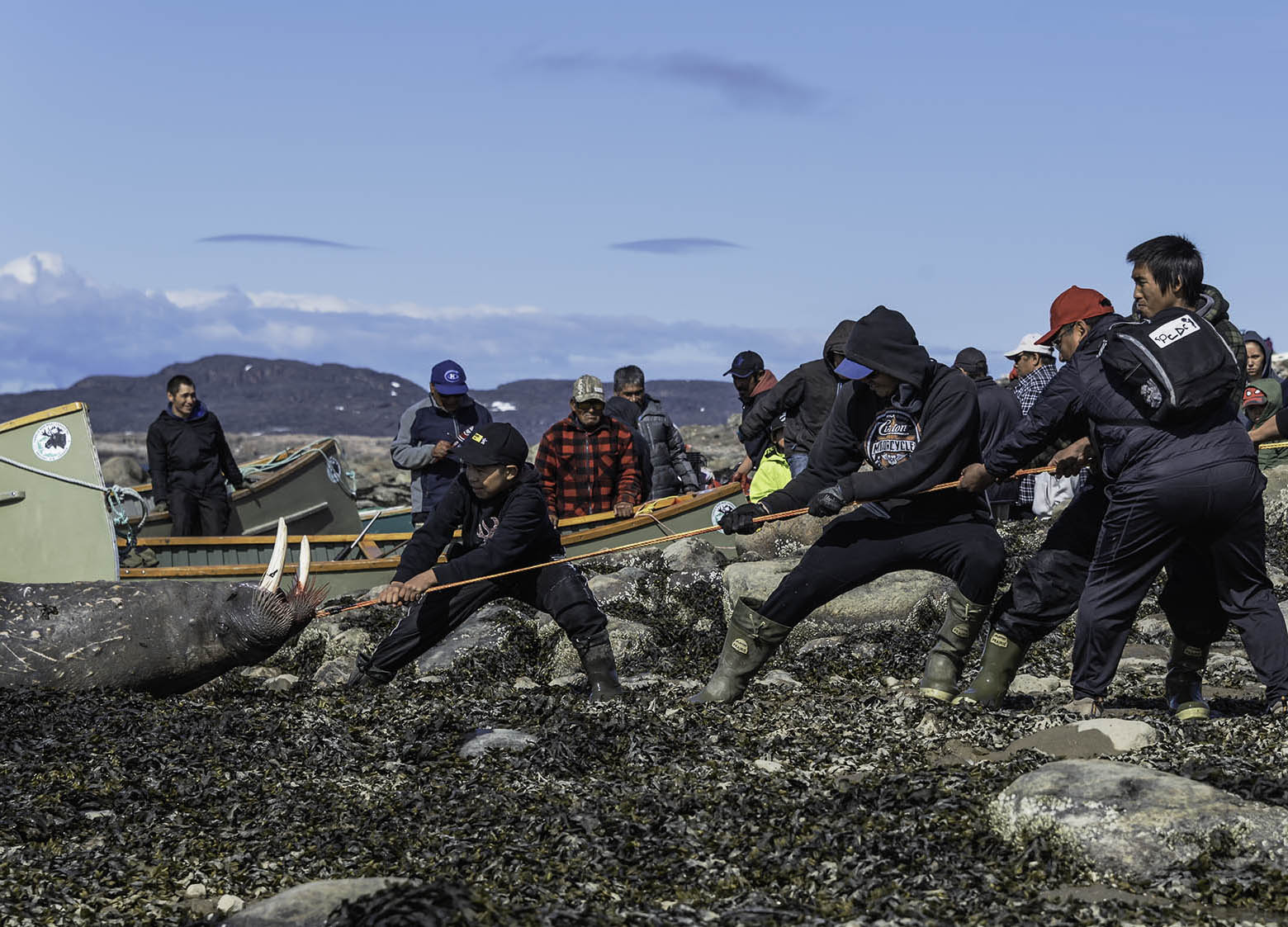 Cape Dorset hunters pull in a walrus the group harvested just outside the Baffin community on July 14. This winter, the federal government will launch a harvester support grant to help fund country food harvesting in northern communities. (Photo by Claude Constantineau)

Under its Nutrition North Canada program, the federal government is including support for country food and the harvesters who make it available.

But the Department of Crown-Indigenous Relations and Northern Affairs has not said how the grant will be doled out, whether to individual harvesters or through local hunters and trappers organizations and land claim beneficiary organizations.

More information on that will be made available in the coming months, according to the department.

The harvesters support grant was first announced as part of the fall economic statement in November 2018, and in the government’s latest announcement about the Nutrition North Canada by Yvonne Jones, parliamentary secretary to the minister of intergovernmental and northern affairs and internal trade, it was confirmed the program would be in place this winter.

In November 2018, a budget documented stated that, starting on April 1, 2019, Ottawa will spend $62.6 million more—about $12.5 million a year—over the following five years on Nutrition North Canada, and $10.4 million per year thereafter.

They said they’ll use the money, following consultations, on “several program changes,” one of which is the creation of a harvesters support grant.

According to the department, the grant will fund expenses associated with traditional harvesting, including transportation, purchasing and maintaining equipment; temporary shelter and outdoor clothing; safety and rescue equipment; training, certification and education; processing, food preparation and storage; maintenance of harvesting sites; and research and innovation.

At what level the grant will fund these costs has not yet been confirmed.

Currently, Inuit land claim beneficiary organizations distribute grants for harvesting, and those organizations have been involved in the development process for Nutrition North Canada and the federal harvesters support grant.

The majority of the grant is distributed among the 14 northern villages, and the Inuit community of Chisasibi on the eastern shore of James Bay, as well as a smaller portion overseen by the KRG for regional programs.

Funding covers transportation, equipment purchase and maintenance, search and rescue, the production of crafts made from by-products of hunting, fishing and trapping, and various other costs associated with traditional harvesting.

That program was suspended in 2014 to give the organization time to review its operations due to concerns that its funds would be exhausted. The program was  re-opened in spring 2017.

Following the program’s reinstatement in 2017, NTI Vice-President James Eetoolook said at the time that they were still looking for support from both the territorial and federal governments to see the Nunavut Harvesters Support Program continue over the long term.

This spring, the Qikiqtani Inuit Association voiced concerns over the lack of support for six Inuit Guardians in Arctic Bay who play an important role in harvesting food for their communities.

QIA had hired them as part of a pilot program related to the creation of the Tallurutiup Imanga marine protected area.

“There is no basic infrastructure for the Nauttiqsuqtiit to do their job,” the QIA report said.

“They have no facility to process the animals they harvest or to maintain their equipment. Like everyone else in Arctic Bay, they have no small-craft harbour or port to safely cast off and anchor boats.”

This summer, when Prime Minister Justin Trudeau was in Iqaluit and Arctic Bay to announce the completion of an Inuit impact and benefit agreement for the Tallurutiup Imanga National Marine Conservation Area, the deal included financial support for country food harvesting.