Vessels will be the largest ships in Canada’s fleet, at 150 metres long and with room for 100 crew 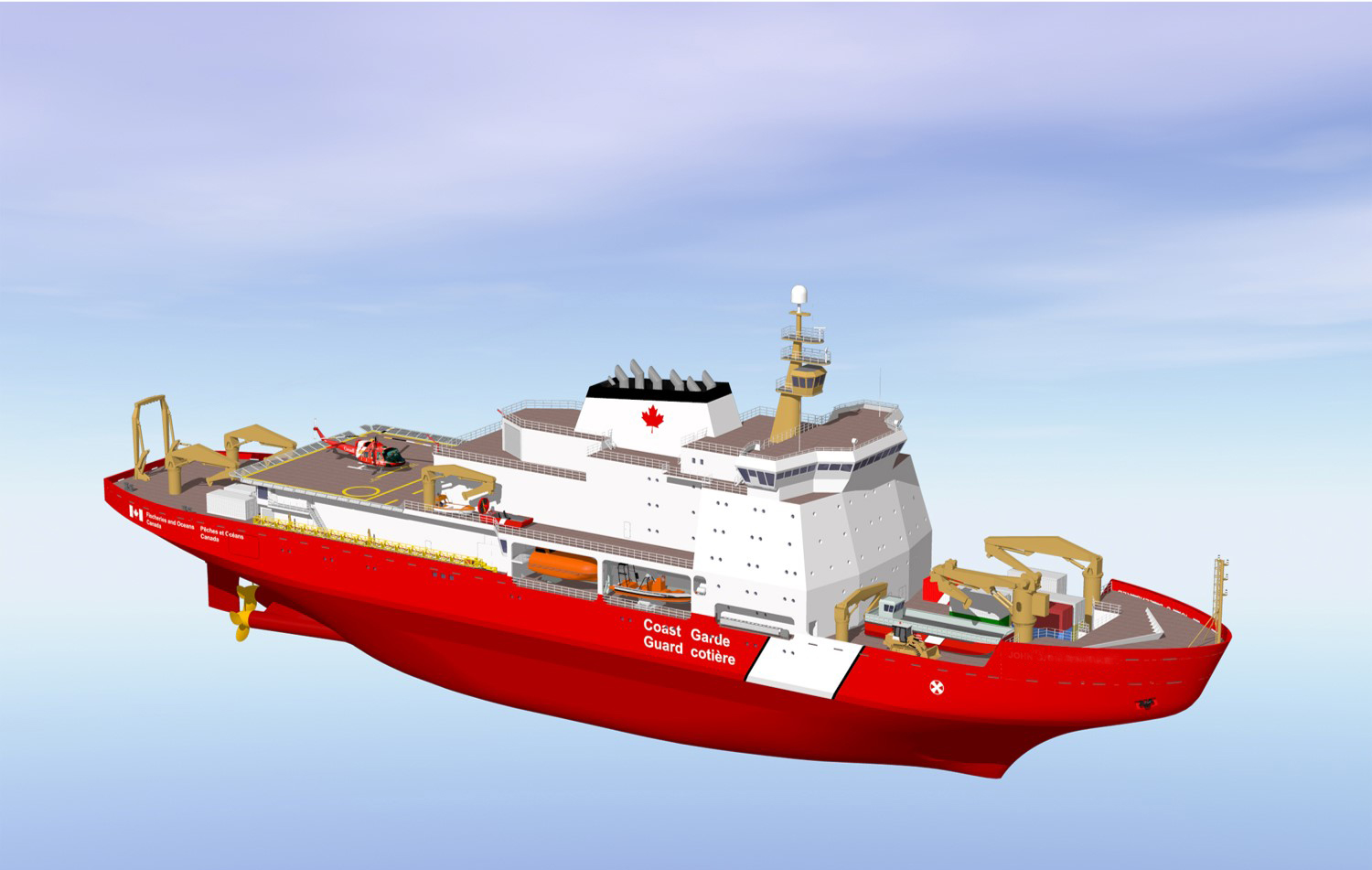 This is a rendering of one of the two new polar icebreakers to be built by Canadian companies, the Government of Canada announced on Thursday. (Photo provided by the Canadian Coast Guard)

Canadian shipyards will build two new polar icebreakers to upgrade the country’s coast guard fleet in the North in response to increased commercial shipping and marine activity, Bernadette Jordan, the minister of the Canadian Coast Guard, announced on Thursday.

“In this remote region, the coast guard is largely what keeps communities safe, connected and livable,” Jordan said in a news conference, calling the new builds a “game changer.”

The ships will support search and rescue and sealift operations, climate change research and be able to respond to emergencies, she said.

“Our coast guard will be there to support northerners.”

These new icebreakers will be the largest ships in Canada’s fleet, at 150 metres long and with room for 100 crew members. The ships will be able to exceed 18 knots — or about 33 kilometers per hour.

One of the ships is slated to be delivered by 2030, with the second coming “shortly after,” Jordan said.

The two new builds will put Canada’s current largest icebreaker, the CCGS Louis S. St-Laurent — which will be 62 years old by 2030 — into retirement.

“It was built to last for between 30 to 40 years … we need to have something we can absolutely rely on,” Jordan said.

With the more powerful icebreakers, the coast guard will operate in the Arctic year-round, with each ship running for nine months and undergoing scheduled maintenance for three months out of the year, on a staggered schedule.

The department estimates the construction of the ships will create about 600 jobs — 300 each — at the shipyards and about 2,500 in the marine supply chain.

There are no specific plans to hire or train Inuit or northerners to fill any of these positions.

“These are going to create jobs in supply chains right across the country … [it’s] all part of the negotiation process that we will be going through in the next little while as we develop the contracts with the shipyards,” Jordan said.

The other will be built by Davie Shipbuilding in Lévis, Que., pending the finalization of a contract.

The cost of the polar icebreakers is still unclear as negotiations are ongoing, but Jordan said it will be made public once confirmed.

Jackie Dawson, an associate professor at the University of Ottawa who has done research on climate change in the Arctic, said the benefits of the new icebreakers outweigh the potential negative impacts of the ships on the environment.

“There certainly could be challenges … but because of climate change, it’s going to get more dangerous to navigate vessels in the Arctic.”

“Ships are going to go out regardless, we know there’s going to be more and more trade, transport, tourism, and the likelihood of incidents is going to go up.”

With the climate warming, ice is breaking up and is more mobile, she said.

In general, it will be easier for icebreakers to get through, and in some cases they may not need to break through ice at all.

She said without the added search and rescue capacity the icebreakers will provide, the risk to the environment could be much higher because of oil spills, for example.

“I think if we didn’t have [the icebreakers] up there, it would be environmentally irresponsible.”

Based on community consultations done across Nunavut during her research on shipping routes, Dawson said generally icebreakers were seen to be helpful, but concerns were raised about icebreakers passing through without communicating with locals.

“If a hunting party goes out and an icebreaker goes through, then a hunting party tries to come back and they don’t have the right equipment there, waiting for the ice to freeze back over, they could be in a dangerous situation.”

She said she also heard concerns about the impact of the noise caused by ice breaking on marine mammals, “but from my understanding they’re thought to be fairly minimal.”

Canada’s coast guard currently has 18 icebreakers in its fleet and in 2019, the Government of Canada announced $15.7 billion in funding to renew the fleet with up to 18 new large ships. They also provided more funding for up to six icebreakers and for maintaining the existing boats.

Correction: This article has been updated from an earlier version that incorrectly identified Bernadette Jordan, the minister of the Canadian Coast Guard.