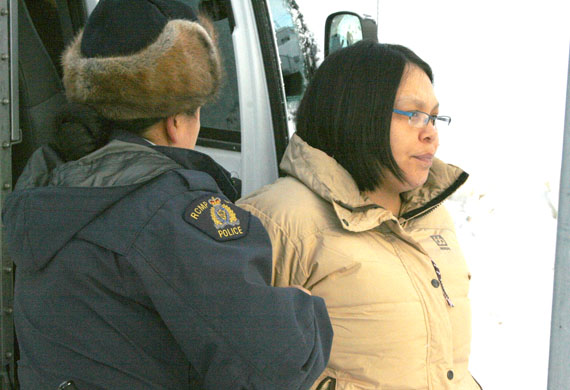 Joyce Kringuk, pictured here entering the Nunavut Court of Justice in Iqaluit in 2008, temporarily escaped from a minimum-security correctional facility in Winnipeg on Boxing Day. (Photo by David Murphy)

More than a week after Joyce Kringuk escaped custody in Winnipeg, no information has been released explaining how the Nunavut woman was able to get away.

Kringuk, of Naujaat, was sentenced to life in prison with no eligibility for parole for a minimum 10 years, after pleading guilty in 2012 to the second-degree murder of her common-law spouse in 2008.

She had been serving part of her sentence at the Eagle Women’s Healing Lodge, a minimum-security correctional facility in Winnipeg, Man.

Shortly after 10 p.m. on Dec. 26, Kringuk was seen fleeing the healing lodge through a rear door, according to a news release from Correctional Service of Canada.

About 13 hours later, on Dec. 27, she was back in custody after turning herself in to Winnipeg Police Service, correctional services reported.

“The Correctional Service of Canada and Eagle Women’s Lodge are conducting an investigation into the circumstances surrounding the incident,” correctional services indicated.

Kringuk was 32 years old when she pleaded guilty on Nov. 6, 2012, to second-degree murder in the shooting death of her common-law spouse, Joani Kringayark, on Aug. 8, 2008.

Kringayark, who was 47 at the time of his death, was a local wildlife officer and the father of one of Kringuk’s children.

The two had been involved in a long-term on-again, off-again relationship characterized by Nunavut Court Justice Robert Kilpatrick in his sentencing decision in 2012 as “stormy.”

“This was a turbulent relationship,” said Kilpatrick . “It was a relationship punctuated by intermittent periods of emotional and physical abuse.”

This week, Nunatsiaq News attempted to confirm with correctional services whether Kringuk was returned to Eagle Women’s Healing Lodge, but did not receive a response at time of publication.

Eagle Women’s Healing Lodge is one of 10 Indigenous healing lodges across Canada that are either funded or operated by correctional services, and one of only three facilities dedicated to women.

According to the correctional services website, healing lodges offer culturally appropriate services and programs to Indigenous offenders with the main goal being to address factors that led to their incarceration, and to prepare offenders to reintegrate into society.

Authorities have not said yet how Kringuk was able to walk out of the correctional facility unchallenged, or how such incidents will be prevented in the future.

Correction: This article was updated to correct the spelling of Judge Robert Kilpatrick’s name.