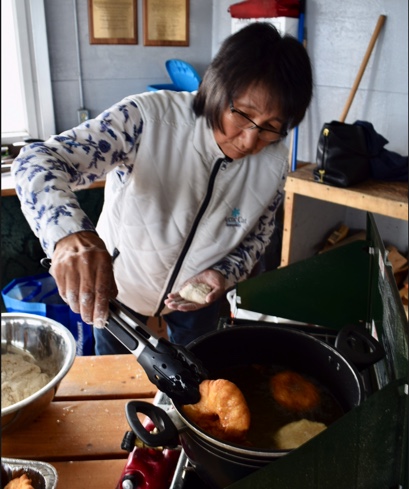 Instructor Luuku Lucy Markoosie gives a demonstration on how to make bannock, a popular fried bread, at Sylvia Grinnell Territorial Park in Iqaluit on Thursday. (Photo by Madalyn Howitt)

Flour, water and a pinch of salt: Crowd gets tips on making bannock

When Ashley Cooper thinks about growing up in the North, vivid memories of eating bannock stick out in her mind.

“When I would visit elders at their homes, they would always fry up some bannock,” said Cooper, who works as Nunavut Parks’ acting heritage appreciation manager.

She said her favourite way to eat the popular bread is to deep fry it and then dip it into sugar.

Bannock was on the menu Thursday at Sylvia Grinnell Territorial Park in Iqaluit, as part of Nunavut Parks’ weekly “Learn To…” workshops offered across the territory this summer.

Instructor Luuku Lucy Markoosie gave a lesson to a small group of participants on how to make the traditional delicacy.

Making bannock calls for a simple list of ingredients: all-purpose flour, warm water, lard, baking powder, a dash of milk, a pinch of salt, and oil for frying.

Some people like to add raisins or sugar to the mixture, while others add sugar to the dough before frying to make it extra crunchy, Markoosie said.

She demonstrated how to make the dough by hand, softening the flour and lard in a bowl until there are no big clumps. She then made a well in the centre of the mixture and poured in the warm water, forming the dough into a round loaf.

Markoosie then showed participants how to fry the dough by forming small bite-sized pieces and placing them into a pot of hot oil, turning over the dough and removing it when both sides become golden brown. 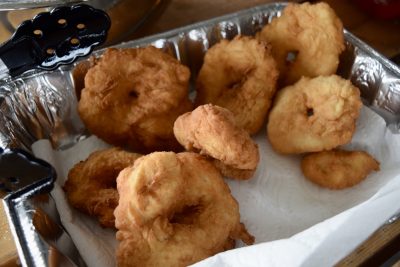 Bannock is one of the foods that people most often make at home, Markoosie said.

“Everybody eats bannock. In the morning with a cup of tea, with coffee,” she said.

Markoosie has been making bannock for about 15 years at home and has been teaching elementary school students in Iqaluit how to make it for about two years.

Another popular way to make it is by heating the dough in a hot pan and flipping it so it cooks through, then “dividing it up like a pizza” to share, she said.

“Even ours, though it wasn’t as good as Lucy’s,” she said with a laugh.

Upcoming “Learn To” activities include traditional Inuit toolmaking and Arctic plant walks. The schedule is listed on the Government of Nunavut’s website.