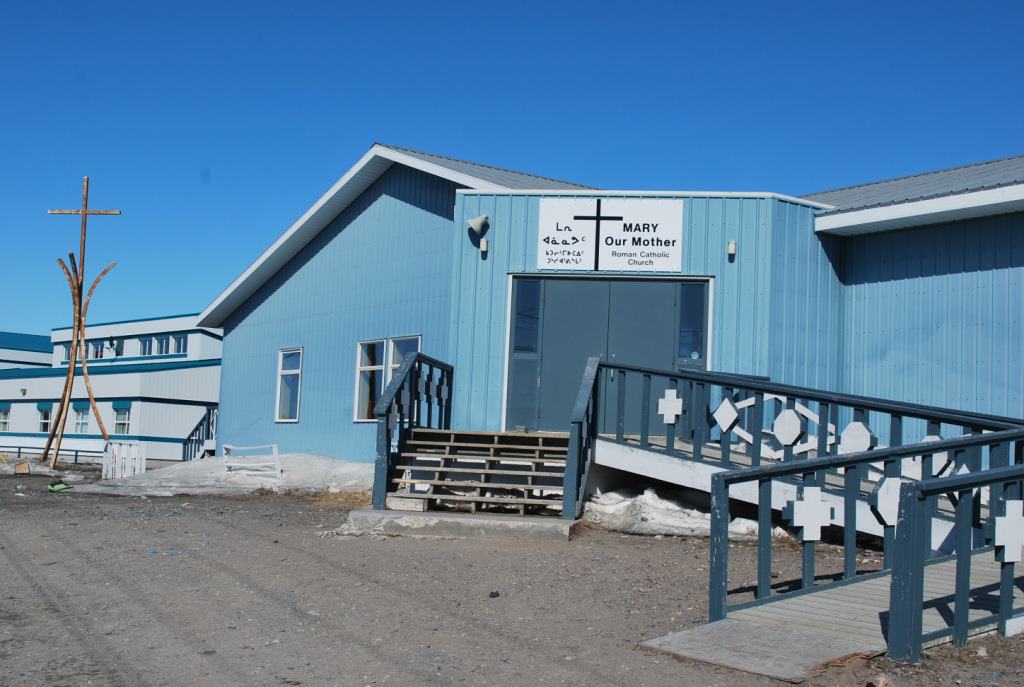 The sharing centre in Rankin Inlet is housed in the community’s Catholic church. (Facebook photo)

A food bank in Rankin Inlet that helps about 100 hungry families each month may have to close if more volunteers don’t step forward, says the centre’s supervisor Cecelia Ayaruak.

“It’s important for our community because there are lots of people who are hungry, especially children,” she said from her home in the Kivalliq hub.

“I see people who are posting things [on Facebook], saying their children are hungry, they need food, and stuff here is so expensive.”

Ayaruak, a 67-year-old retired educator, said she has been volunteering to run the Rankin Inlet Sharing Centre for most of the last three years.

The centre is open every second and third Monday of each month and to run a shift, she needs six to eight volunteers.

But recently, those volunteers have been hard to come by.

“If I’m sitting alone there, I can’t do it. I’ll have to shut it down until I have volunteers,” Ayaruak said.

The centre hands out staples which include hot and cold oatmeal, coffee, sugar, evaporated milk, diapers and canned pasta.

The food is sent by the St. Vincent de Paul Society in Toronto, with the Catholic church in Rankin Inlet housing the sharing centre.

“There are a few families that come with 14 [people] in one household, because of our housing shortage,” Ayaruak said.

According to the Nunavut Housing Corp.’s assessment in July, Rankin Inlet is one of 15 Nunavut communities in “critical” need of more housing.

Rankin sits sixth on the housing corp.’s list of communities in most need of housing, requiring 61 per cent more than it currently has.

More than half of Nunavummiut live in social housing, and about 80 per cent of those in social housing make about $23,000 a year, according to the housing corp.’s 2016 report to the Standing Senate Committee on Aboriginal Peoples.

Food insecurity in Nunavut has been a longstanding crisis that impacts children disproportionately.

According to Statistics Canada, 49 per cent of Nunavut households experience food insecurity.

The federal government introduced the Nutrition North program in 2011 to help defray the high cost of food staples in Nunavut.

But numerous studies have questioned whether that program has had the desired impact.

A study in 2019 by a trio of researchers from the University of Toronto, for example, found that food insecurity increased by 13 per cent between 2011 and 2019.

Rosa Putulik is a mother in Rankin Inlet to three children.

She told Nunatsiaq News that she both volunteers for the sharing centre and uses its services.

“After people come, when they go home, the kids are happy because they’re eating,” she said.

Households of seven or more regularly come to the sharing centre, Putulik said.

“Cecelia goes on air [on local radio], she always says she needs more volunteers and help because a lot of people get their food there,” Putulik said.

Her last shift at the Sharing Centre went an hour past usual opening time because of the long lineup, Putulik said.