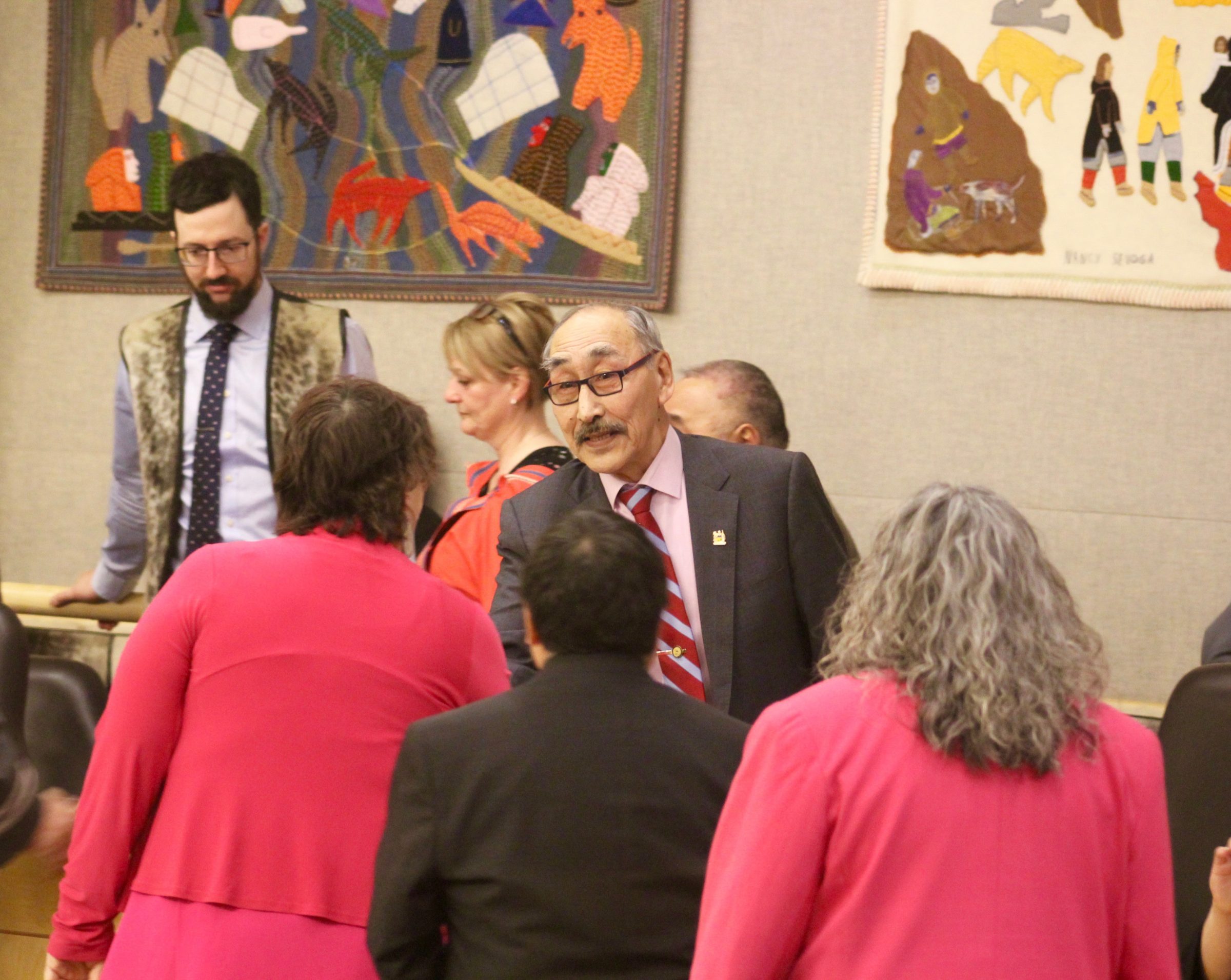 Paul Quassa is congratulated by his fellow MLAs after he is picked as the new Speaker of the legislative assembly on Wednesday, Feb. 26. (Photo by Emma Tranter)

Paul Quassa, Nunavut’s former premier, will take a new place in the legislative assembly, this time in the sealskin upholstered Speaker’s chair.

The Aggu MLA was chosen by his fellow MLAs to be the assembly’s new Speaker after a secret ballot this morning.

After MLAs cast their ballots, Hudson Bay MLA Allan Rumbolt read out the results, accidentally reading the name of former premier Paul Okalik, instead of Paul Quassa, causing the assembly to erupt with laughter.

The election was triggered by the resignation of Simeon Mikkungwak, who left the job on Feb. 25 for personal reasons.

Along with Quassa, MLAs nominated three others for the position: Tony Akoak, Pauloosie Keyootak and Joelie Kaernerk. Only Quassa and Akoak accepted their nominations.

As per the rules of the assembly, the nominees for the position of Speaker do not deliver speeches and a question and answer period does not occur. All votes are made via secret ballot.

Quassa told reporters that becoming Speaker was something that had been on his mind since he was elected as MLA.

“I think this is a great moment for me and my family and for Nunavummiut because it’s an honour to be a Speaker of the house, wherever we are, in any jurisdiction. And I think Nunavut is very special,” he said.

Quassa was also nominated for Speaker last year after the death of former Speaker Joe Enook but lost to Mikkungwak.

“This is something that I wanted to do. With the support of my family, I was going to run for Speaker again this time around.”

Quassa was removed from the position of premier in a non-confidence vote in June 2018.

Quassa said his experience as premier, MLA and cabinet minister will help him execute his new duties.

“I know the process. I think it’s very important for Nunavummiut to get as much [as they can] out of our legislative assembly.”

The Speaker presides over all sittings of the legislative assembly and is in charge of enforcing the rules of the assembly.

Quassa’s election will be made official when a motion is passed during this afternoon’s sitting of the legislative assembly.