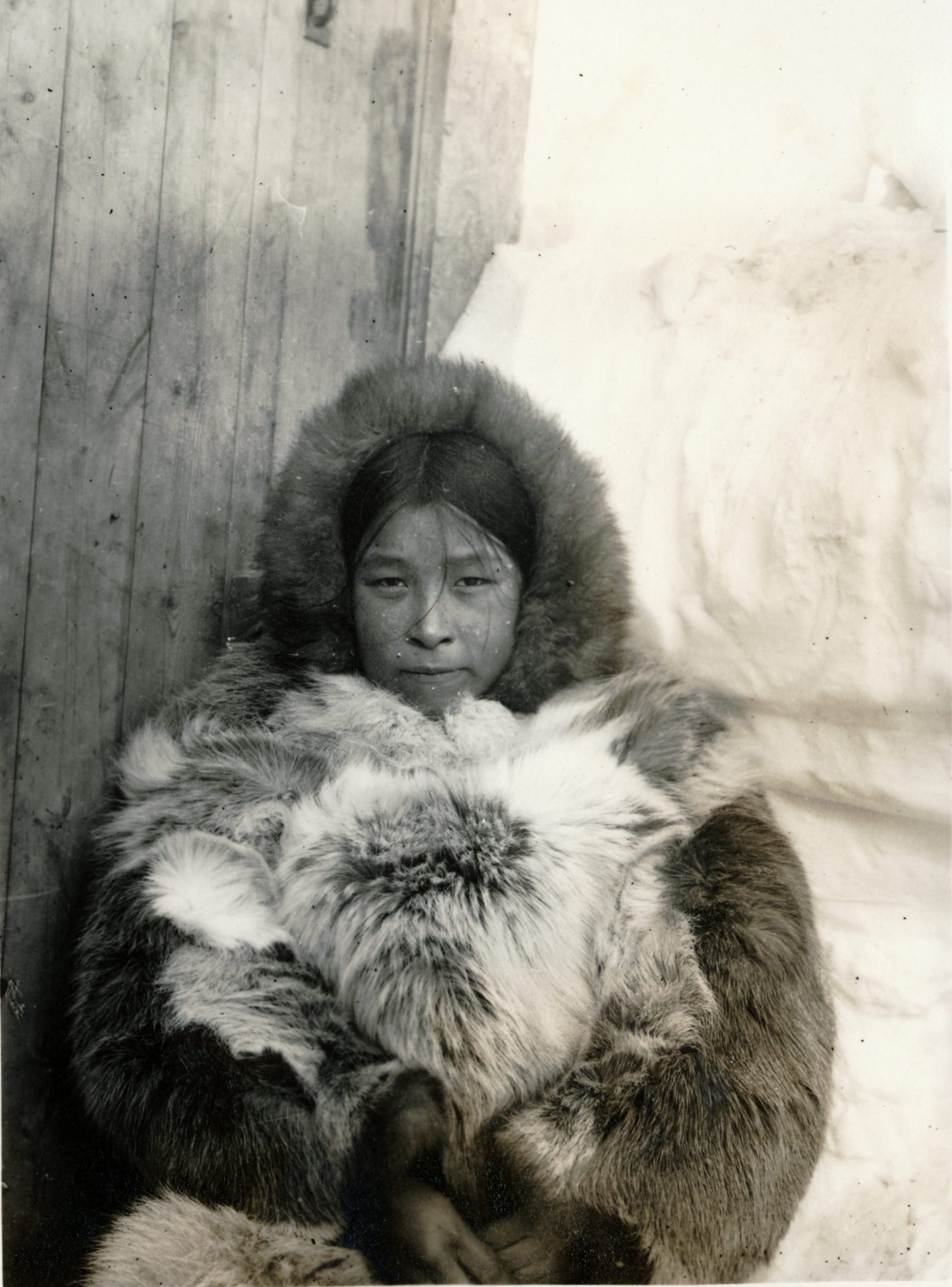 Aqattaq, the youngest member of the Fifth Thule Expedition, was the wife of Poorsimaat. Photo by Therkel Mathiassen. (Photo courtesy Arktisk Institut 147033)

Freuchen and the Inughuit return to Greenland – Part 1

In late December 1923 or early the following month, Peter Freuchen became a father for the third time.

His lover from the previous spring, Qaqurtinneq, bore a son whom she named Ole. His exact birth date, at Wager Inlet, is not known but he was baptized Jan. 19, 1924, in the Roman Catholic church at Chesterfield Inlet.

Whether Peter knew of the birth is not known, but family lore says he certainly knew of the pregnancy and had considered taking the young woman back to Denmark with him but her family intervened to keep her with them.

Four days after the birth, Freuchen left expedition headquarters on Danish Island for the final time, beginning the long trek to Greenland, accompanied by Poorsimaat and his wife, Aqattaq, and Aaqqiuq, his wife, Arnannguaq, and their baby daughter, Navarana.

One of the expedition’s longtime local guides and assistants, Anaaqqaq, accompanied the party for a time before turning back. Curiously, he would later wed Qaqurtinneq and raise Ole as his son.

The trip was long and dangerous, and one of the great unsung episodes of stamina and determination in the history of Arctic travel.

Two days north of Lyon Inlet, they met Aguano and his wife, Qinoruna, who decided to accompany them to Greenland. From there they travelled to Iglulik, and then on to Baffin Island, described as “the very seat of all the traditions of the Eskimos. It was, in a sense, sacred ground for a student of these people.”

When they reached Milne Inlet, they encountered deep, soft snow which made for hard sledding. After two days, they reached better ice and continued on to Pond Inlet.

Shortly thereafter, they left for Lancaster Sound, but a gale in Eclipse Sound left them stormbound for several days. They met Inuit there who were starving, and Freuchen sent Aguano and his wife back to Pond Inlet with a note informing police of the condition of the unfortunate people. They never saw Aguano again.

Freuchen’s plan was to duplicate the Lancaster Sound crossing of a legendary Inuit shaman named Qillarsuaq, who had led a party across the sound, around the coasts of Devon Island and up the east coast of Ellesmere Island in the 1860s to Greenland where they intermarried with Inughuit.

Freuchen had heard of that epic trip from old Miqqusaaq, the grandfather of his first wife, Navarana.

At one point, they were caught on an ice pan. The men made a shelter for Arnannguaq, who was nursing her baby Navarana.

Then, recounts Freuchen: “The ice … parted between the women; Aqattaq had grabbed up the child and had run with her. The mother’s arms were inside her coat, and she could not get them out in time.

“Thus the two mothers were parted by open water, and I ran after Aqattaq and Navarana. I took the child — who had been lying on her mother’s lap with no kamiks on her feet — and stuffed her inside my coat with her feet down inside my pants.

“She thought this was very funny, and laughed hilariously, but her position prevented my jumping back to my friends, and after a few seconds the water was too broad to leap over.”

Finally, they found a place where the two floes were relatively close. Freuchen took off his coat, wrapped Navarana in it and threw it across the water “like a sack” to her father, who caught it.

Navarana was safe with her mother again. Freuchen and Aqattaq finally found a spot narrow enough to jump across, and the parties were reunited.

They had left Pond Inlet with 34 dogs, but by the time they reached what Freuchen reckoned to be the middle of the sound, that number was reduced to 16.

Many of their supplies had been lost in crossing from ice pan to ice pan; they had no kerosene and no primus stove. Freuchen was lucky to have saved his notebooks, and wrote: “It was only by good luck that I had not lost my sled and load.”

Freuchen figured they could reach either side of the sound in about one sleep. If they went north, though, they would be in “unfamiliar, uninhabited country.” If they went south, they might find a settlement of Inuit and replenish at least some of their supplies.

He knew too that the expedition vessel Søkongen, under Captain Pedersen, would leave Thule soon for Pond Inlet to pick up Freuchen and his party, if they were there.

It took them two nerve-racking days of crossing ice pans to finally reach land, but they were far to the west of the point from which they had left.

They took refuge in a cave and waited there until their clothes dried and they had regained some strength and caught up on sleep. Once their death-defying crossing was behind them, Freuchen noted in his unique style, “…we discussed our adventures on the ice as if they had been arranged for our pleasure,” adding “Eskimos are great people.”

Travelling east, they reached the mouth of Admiralty Inlet where they encountered open water.

Heading into the inlet, they reached a point where Aaqqiuq had been on an earlier trip with Mathiassen. He advised travelling further east in the inlet to where he thought some rivers might lead eastward to Milne Inlet.

Finally, they encountered a group of starving Inuit, 13 in all. Freuchen wrote, “They looked strange to us, unlike any people we had ever seen before. Their faces were hollow and their eyes sunk deep in their skulls. They had no real clothes but were covered with scabrous-looking rags and filth.

“They were starving …We thought they were ghosts at first, but I talked to them.”

Instead of replenishing their own supplies, Freuchen’s party gave seal meat to the starving people. Slowly, they moved back northward along the east coast of Admiralty Inlet, helping the starving party to accompany them.

They reached a point called Uluksan near present-day Arctic Bay, where they remained for some time.

To be continued … This is the first part of a two-part feature. Look for the second part of the story on Aug. 6.