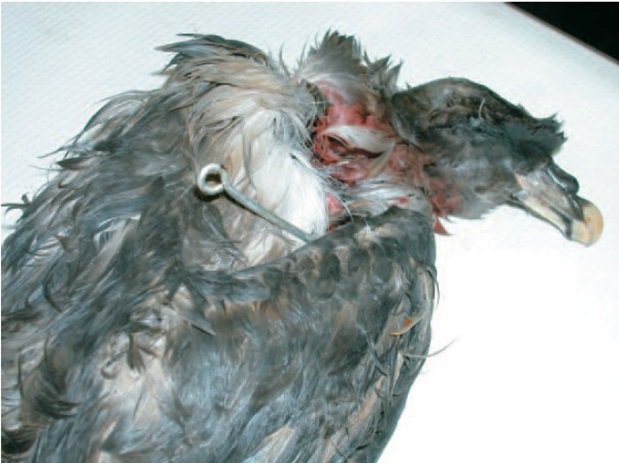 It’s not pretty, but this is what happens to fulmars which get caught up in fishing gear in Baffin Bay and Davis Strait. (PHOTO COURTESY OF MARK MALLORY)

The numbers of fulmars killed as bycatch in Baffin Bay and Davis Strait could lead to declines in the local population of these gull-sized grey-and-white seabirds.

Some 221 fulmars a year are killed by commercial fishing for Greenland halibut, also known as turbot, but even that number could be enough to reduce the colony by roughly a third over three generations, says a new research study, recently published in the journal Marine Environmental Research.

“Our results illustrate that while by-catch of seabirds in Baffin Bay and Davis Strait may be perceived as low, it is substantial enough that resulting population declines are likely,” said the study, which was produced by an international team of biologists from Canada and Greenland.

The study’s authors found that northern fulmars are vulnerable to bycatch in the fisheries for Greenland halibut, which they acknowledge is the largest and most valuable fishery in the Baffin Bay-Davis Strait region.

By looking closely at reports of bycatch in Greenland halibut fishing, the researchers found all the recorded seabird bycatch took place in gillnets, a wall of netting that hangs in the water, rather than through longline or trawling gear.

They concluded that northern fulmars are particularly susceptible to this gillnet gear.

The report suggests that “developing mitigation practices for the Canadian Arctic alongside the growing fisheries would allow Nunavut fishers to implement conservation-based practices in an economical way.”

Measures to cut bycatch of fulmars include “reducing and strategically timing” discards of fish parts and offal from vessels that attract these seabirds.

Bycatch in fisheries is considered a major threat to global seabird populations, with the world’s fisheries estimated to accidentally harm or kill more than 150,000 seabirds every year due to incidental bycatch, the research study notes.