Nunavut Inuit should be wary of ever-evolving mine plans

“We are unprepared for what’s really in store for us” 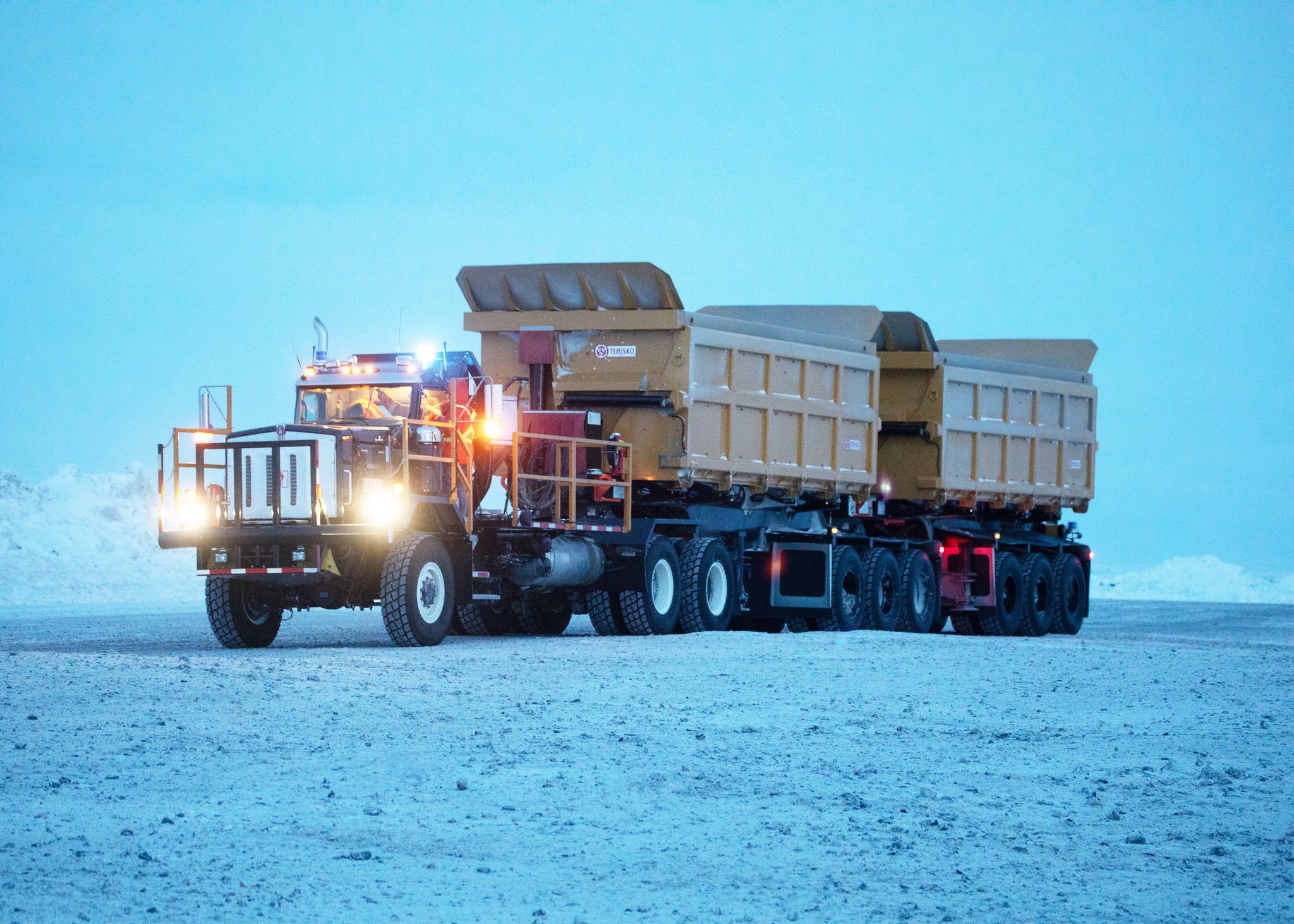 A 150-tonne long-haul truck is seen at Agnico Eagle Mines Ltd.’s Amaruq mine. Baker Lake resident Joan Scottie says that dust kicked up by mine traffic is causing caribou to change their migration patterns and move further from her community. (Photo courtesy of Agnico Eagle)

I recently read the news that Agnico Eagle Mines Ltd. was granted an amended water licence. The amended licence allows it to transfer water from a containment pond to Meliadine Lake, which is a precious traditional camping and fishing domain site for Rankinmiut Inuit. I’ve also read that Agnico Eagle is proposing to build a pipeline to transport water from the mine to Itivia Harbour, which has a lot of hunters worried that caribou migrations might be disturbed.

These recent developments remind me how many of Qamani’tuarmiut (Baker Lake residents) felt when we were bombarded with uranium mine proposals twice in the last 40 years. Because of these proposals for the Kiggavik uranium mine, my community had to do a lot of research into the negative effects of uranium mining, including the potential contamination and disruption of our environment, caribou habitat, and fishing and hunting grounds.

One thing we learned was that the Kiggavik mine would be a “game changer” for uranium mining companies that were operating near Baker Lake. If the Kiggavik mine was built, we knew that many more mines would likely follow, and we would be politically powerless to stop them.

Unfortunately, when a mine is proposed near our communities, discussion is focused on the specific proposal. There is very little consideration of how the project might change and evolve, or other mines that might follow in its wake once it is approved. As a result, we are unprepared for what’s really in store for us.

Agnico Eagle’s Meadowbank mine and all-weather road near Baker Lake are a good example of this problem. The original proposal was approved in good spirit and trust on our part. We believed that the regulatory system protected our land and wildlife. However, once the mine went into full operation, we were caught off guard. We didn’t expect dust, which now blows and accumulates on the tundra that caribou graze on, to be a serious disturbance to our traditional lifestyle. We also didn’t worry that the caribou, which used to be near our community year-round, might be driven away by the disruption from the mine road. In a submission to the Nunavut Impact Review Board, the Baker Lake Hunters and Trappers Organization noted that many hunters in Baker Lake have observed a change in caribou migrations in our area. A lot of people, myself included, believe that mining and exploration activity is at least partially to blame.

A few years after Meadowbank was approved, Agnico Eagle came to us with a proposal for another mine located west of Meadowbank. The Whale Tail mine (sometimes called Amaruq) was not discussed at all when Meadowbank was first approved.

I am concerned that Whale Tail is a very disruptive project, because it involves hauling ore in big trucks between the Whale Tail and Meadowbank sites, through important caribou migration routes.

However, it was very difficult for us to talk back or influence the process. Some elders were very unhappy with the route chosen for the new road, but we couldn’t convince the company to budge. Because Baker Lake residents are employed at the mine, it was difficult for a lot of people to really talk back.

Based on my observations and what I have heard from other hunters, the Whale Tail project has disrupted caribou migration routes. During the 2019 summer season, the migrating caribou herds that usually come close to the community in the fall were six weeks late. Many hunters were coming home empty handed, even though they would drive more than 80 kilometres out of town looking for caribou. I’ve heard from Inuit who worked for Agnico Eagle that the convoys of large trucks were causing disturbance to migrations.

This past winter, I learned that Agnico Eagle wants to roll back the caribou protection measures on the road.

I’m worried that our community organizations won’t have the power necessary to stop them. Experience has shown us that it might be too late to have a say in these amendments that are hurled at us once a mine is going full blast.

Agnico Eagle has brought some positive changes to our community. Their mines have created jobs for local people and new opportunities for local businesses. However, Inuit are losing our means of traditional livelihood. When the mine was first approved, we did not foresee how much we would lose out in terms of subsistence hunting. If these new changes at Meliadine and Whale Tail are allowed to go ahead we will lose out even more.

I am not against mining in principle, so long as our traditional livelihood is guaranteed to be protected. These new changes might cross that line.

On a more positive note, I was very happy to read that residents of Rankin Inlet blocked the road to the Meliadine mine to force Agnico Eagle to take the novel coronavirus more seriously. It was wonderful seeing regular people taking matters into their own hands and sending a strong message to the mining industry expressing how Rankin residents felt.

In all of my years organizing against uranium mining, I have always believed that involving regular people (not politicians and government workers) is very important politically. We can elect the best leaders, but if our community is not pushing them in the right direction, they won’t have much power at the negotiation table. The Rankin Inlet blockade might be a “game changer” for Inuit. I hope it inspires more regular people to stand up and fight for our health, environment and traditional way of life.

Email your letters to editors@nunatsiaq.com.

An earlier version of this letter stated that Agnico Eagle was granted a new water licence for its Meliadine mine, when in fact it received an amendment to its existing licence.