Get a shot, earn a shot at winning $2,000: The ethics of Arviat’s COVID-19 vaccine lottery 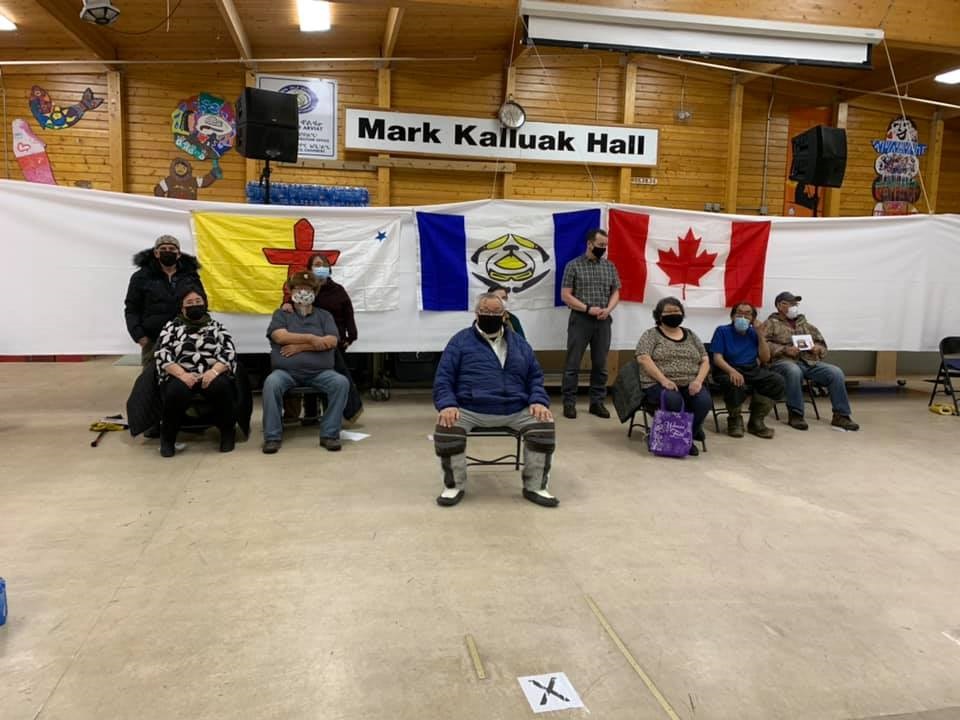 Arviat elders wait to be vaccinated in January at the community’s Mark Kalluak Hall. As public health measures ease, Arviat residents can now gather in public spaces like the hall in groups of no more than 50. (File photo)

Five lucky Arviat residents will have their names drawn to win $2,000 cash on Tuesday, all because they rolled up their sleeves for the COVID-19 vaccine.

A vaccine lottery is a “great way to promote something that will help the community,” said Adrienne Tattuinee, who lives in Arviat.

Tattuinee said she’s heard some in the community say the draw is unethical, and knows of one person who is “outraged.”

She points out the vaccine is positive for the community and people have the ability to get educated and make their own decision about whether to get it.

Kerry Bowman is an assistant professor at the University of Toronto and a bioethicist who does cross-cultural research with the university’s Joint Centre for Bioethics.

He says the idea is certainly uncommon, and in general, people should not be offered incentives for things like this.

“You want to give people the facts and they make a free and autonomous decision,” he said.

But other factors make Arviat’s draw less concerning, he said, like the fact that the idea came from the community.

On top of that, Bowman said, what goes on in Indigenous communities really needs to stay in the hands of Indigenous people.

“If someone in the federal government was initiating [the draw] I’d be a little more uncomfortable, but Canada has multiple unique societies and you really have to apply a cultural lens [to the issue],” he said.

“If you had people that were desperately poor and they thought, ‘The only way I’m going to eat is to join this lottery,’” there could be an ethical problem, said Bowman.

Arviat Mayor Joe Savikataaq Jr. said the draw is intended to incentivize the vaccine, which has been thoroughly tested and is safe.

“There was lots of misinformation going around social media, which made people fear getting the vaccine,” he said.

But that’s not the only reason.

Savikataaq Jr. said the draw is intended to be a way to give back to the community after a COVID-19 outbreak ended there earlier this month.

“This town has gone through a lot,” the mayor said.

The hamlet, with a population of approximately 2,700, was the epicentre of Nunavut’s outbreak last year, with 222 infections and one death.

Savikataaq Jr. said he hasn’t heard any negative backlash since the draw was announced.

More than 850 Arviat residents had been inoculated since the first vaccines were administered on Jan. 13 and then at clinics last week, not counting the vaccinations given on Monday, the last day of the clinic, said Savikataaq Jr.

That represents about 45 per cent of the hamlet’s eligible, adult population, 1,855.

Federal Indigenous Services Minister Marc Miller said in a Jan. 13 news conference in Ottawa that Inuit leaders wanted information about the vaccine translated into Inuktitut and local dialects so people could be fully informed about it.

Some documents have been translated into Inuktitut and information is being spread through social media posts and radio messaging, according to an email from his office.

The minister’s spokesperson, Adrienne Vaupshas, acknowledged why vaccine hesitancy may be more present in Indigenous communities.

“For example, historical treatment of tuberculosis patients at Indian hospitals or sanatoriums, and reports from residential school survivors of being experimented on while at residential schools,” she wrote in an email to Nunatsiaq News.

Dr. Michael Patterson, Nunavut’s chief public health officer said “each community has the right and the need to do what they think is correct,” responding to a question about the ethics of the draw in a news conference on Jan. 14.

Communities across Nunavut are in charge of how they roll out vaccination clinics and run vaccination campaigns in their communities.

In total, 2,141 vaccines have been administered across Nunavut, according to the territorial government’s online tracker, updated on Jan. 18.

Cambridge Bay residents are next on the list to get vaccinated, with a clinic running from Jan. 14 to 16.