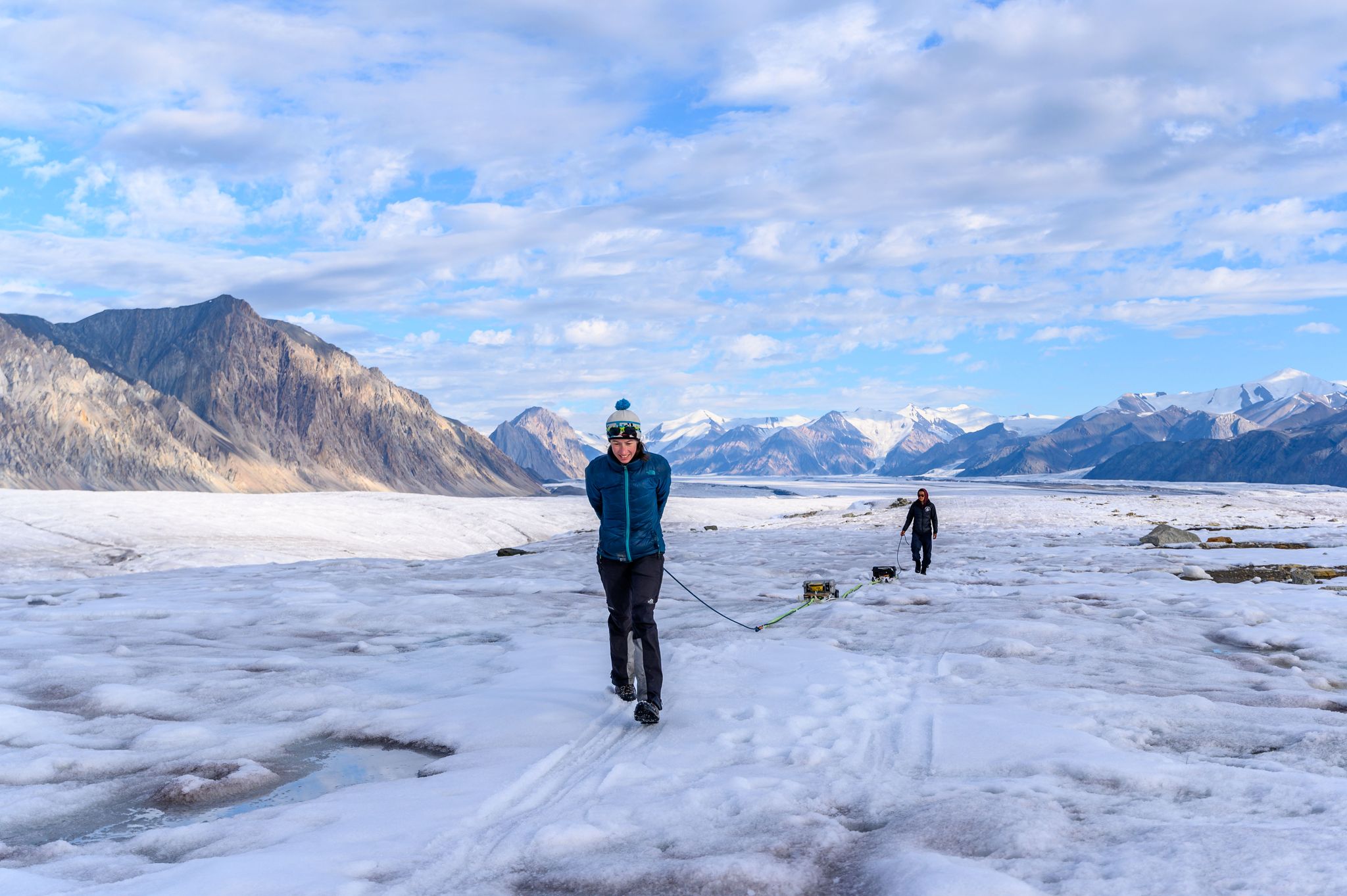 Glacier researcher Anna Crawford (left) pulls a device that is collecting data on the thickness of the Milne Fiord ice shelf on a research trip to Ellesmere Island earlier this month. Crawford uses 3D computer models to look at how glaciers and different forms of big ice deteriorate. (Photo courtesy of Dustin Patar)

Until recently, Ellesmere Island’s Milne Fiord was home to one of only a few known epishelf lakes in the Arctic, freshwater lakes that form when water runoff from land becomes trapped in a fiord behind a floating ice shelf.

That floating ice shelf — known as the Milne Fiord ice shelf — partially collapsed in July 2020, causing the lake to drain. The aftermath of that event has since become a key focus of Arctic researchers, from oceanographers to glaciologists.

One of those researchers is ice shelf expert Anna Crawford, a postdoctorate fellow at the University of Edinburgh and a recent recipient of a $25,000 Trebek Initiative grant, named after the late Jeopardy! host Alex Trebek.

The initiative, a joint venture between the National Geographic Society and the Royal Canadian Geographical Society, provides grants to emerging educators, conservationists, researchers and others who are documenting Canadian and Indigenous land, wildlife, water, culture and history.

Crawford used the grant to travel as part of an eight-person team to Milne Fiord earlier this month, where she surveyed the ice shelf to collect data that will help quantify the impact of sea-ice loss on the ice shelf’s stability.

She uses 3D computer models to look at how glaciers and different forms of ice deteriorate, allowing her to simulate the processes that glaciers or ice shelves go through. 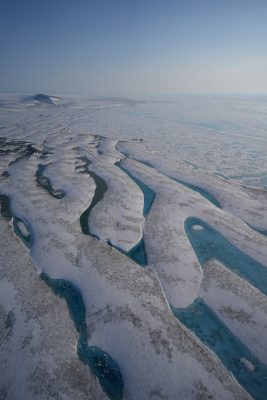 “Glaciers aren’t static, they flow and then they also break and it produces icebergs, so these 3D models allow me to build a computer representation of a glacier and then let me kind of evolve it and see how it behaves,” Crawford said.

To collect the data, Crawford used an ice-penetrating radar while she walked along the surface of the ice shelf. Milne Fiord’s ice shelf is a perennial ice feature about 100 metres thick, so it “doesn’t drift away or reform every year. It’s been there for a long time,” she said.

She also spent time doing an aerial photo survey with help from a helicopter when weather conditions permitted it.

She was able to collect a three-kilometre stretch of ice-thickness data that will help show how epishelf lake drained two years ago, and act as baseline data from which researchers can monitor glacial change.

The epishelf lake is important, said Crawford, because it’s “like a bottomless freshwater lake and instead of the bottom being ground, the bottom is the salt water from the ocean,” allowing for a “really unique biological ecosystem to exist.” 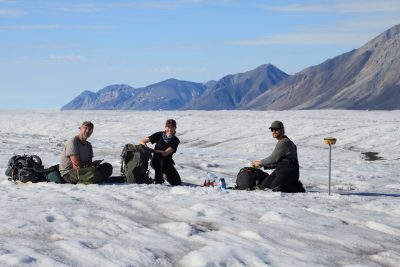 The Milne Fiord epishelf lake was the last known epishelf lake in the Canadian Arctic, and there may only be a few others in other Arctic regions, Crawford said.

Several epishelf lakes once existed along the northern coast of Ellesmere Island, but the gradual thinning and break-up of ice shelves from climate change has resulted in drainage events and the loss of most of these lakes — researchers observed that in July 2020, the Milne Fiord ice shelf lost 40 per cent of its surface area.

“That’s been kind of disheartening from one angle, but also very interesting,” Crawford said of the loss of the epishelf lake at Milne Fiord.

“Now we have a natural laboratory to keep returning to study the impact of that lake drainage on the remaining elements of that fiord system.”

Ultimately, Crawford is interested in using her 3D models to study how the ice shelf is made more vulnerable by the loss of sea ice, which can actually provide some protection to the more permanent ice shelves.

Also, she wants to examine the way the stability of ice shelves could be impacted if more sea ice is lost, which scientists anticipate will happen due to climate change.

By visiting Milne Fiord in person, Crawford was able to “slingshot” her research in this area, she said.

“A lot of times, us in the glacier modelling community don’t actually get to travel to the sites that we’re simulating and studying, but it’s really valuable if we can do those visits because it gives us that eyes on the ground and a chance to better understand the major factors at play in such a system,” she said.

“Those are the factors that really need to be represented accurately when we go and do these simulations with our computer models.”