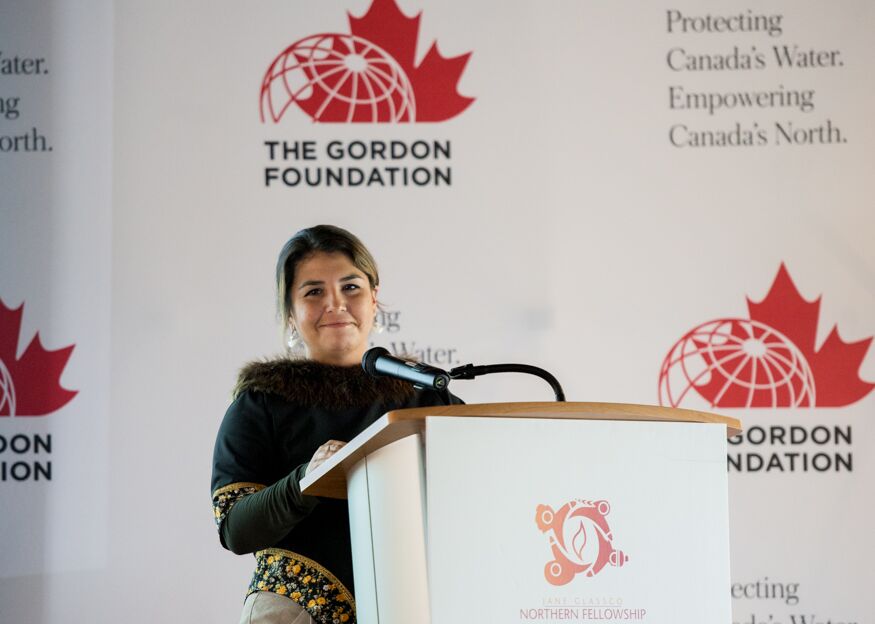 Tina Piulia DeCouto suggests that if the Government of Nunavut and the private sector truly incorporated Inuit maligait (laws) into their practices, then Inuit might be able to live in a society that truly reflected their worldview and history. (Photo courtesy of the Gordon Foundation)

What happens when you discover you are an uncomfortable Inuk?

If you’re Tina Piulia DeCouto, you figure out what’s making you uncomfortable and then try to change it.

Piulia DeCouto, Nunavut Tunngavik Inc.’s director for social and cultural development, and a recent Jane Glassco northern fellow, wrote a policy paper for her fellowship about that very thing, combining personal experience and research into the meaning of Inuit Qaujimajatuqangit.

“It came from a very personal place, having been born and raised here in Iqaluit and not being able to speak fluent Inuktitut and often feeling discomfort when people would question whether I am Inuk or not, even though I am,” said Piulia DeCouto. “I often felt out of place.”

Piulia DeCouto’s paper, which was recently released by the Gordon Foundation, suggests that if IQ and Inuit societal values truly formed the backbone of policy-making and governance in Nunavut—as land claim negotiators and Nunavut’s first elected representatives had hoped—Piulia DeCouto might not feel so uncomfortable in her own home.

That may sound straightforward, but finding a way to get rid of that discomfort is not, and she outlines some reasons why in her paper.

English has become the language of government and commerce in Nunavut, for example. Robert’s Rules of Order frame how people discuss things and make decisions. A revolving door of transient workers makes even the best of programs and intentions stutter and fail. And when Government of Nunavut staff have to meet with their federal colleagues, it’s always on foreign, colonial terms.

Piulia DeCouto’s mother was Inuk and her father was Portuguese. She spoke some Inuktitut at home but is not fluent. She learned about parts of her culture, but not others. And so as an adult, she often felt too qallunaat among Inuit and too Inuit among qallunaat.

In her paper, “Uncomfortable Inuk—Exploring Inuit Qaujimajatuqangit,” she shares her experiences of searching for Inuit values within herself, and within Nunavut government departments and institutions, and finding, instead, their absence.

She tries to make up for that in her own work.

“One of the things I value, and try to implement within my role, is to work collaboratively with others, and to draw on each individual’s or organization’s knowledge, experience and understanding, ensuring Inuit are able to participate within government,” she said.

She sees pockets of change—the GN Department of Culture and Heritage asks Inuit to conceptualize potential policy ideas before those policies are written, for example, instead of drafting policy in English, translating it into Inuktitut and getting Inuit input after the fact.

She also finds hope in organizations such as the Aqqiumavvik Arviat Wellness Society and the Ilisaqsivik Society in Kanngiqtugaapik (Clyde River), which is a non-profit organization that offers numerous programs including Inuit counsellor training. The problem, as always, is that those organizations are chronically underfunded and must constantly search for grants and other funding sources.

Other examples include the Akitsiraq Law School and Piqqusilirivvik, a division of Nunavut Arctic College that is “dedicated to enabling the transfer of traditional culture and knowledge.”

Piulia DeCouto suggests that if the GN and private sector paid more than just lip service to IQ, if they truly incorporated Inuit maligait (laws) into their practices—working for the common good, maintaining harmony, planning for the future and showing respect for all living things—then Inuit might be able to live in a society that truly reflected their worldview and history.

The GN could start by investing in an Inuit-specific public administration undergraduate program that could prepare students, not just to get top-level jobs within the GN, but to change the workplace to reflect IQ once they get there.

Of course, before you can even hope to do that, you must take care of basic needs, Piulia DeCouto says: health, housing and food security.

“If Inuit are not able to physically meet our basic needs,” she writes, “we cannot progress towards self-actualization and self-determination.”

Some days she feels discouraged, but on other days she feels change is already happening. She cites the work of NTI president Aluki Kotierk and Leena Evic, lifelong Inuktut advocate and president and founder of the Pirurvik Centre, both of whom are dedicated to preserving and growing Inuit language and culture.

“It’s a complicated thing, if we are going to think about IQ organically and holistically,” she said. “I’ve heard Dalee Sambo … [with the Inuit Circumpolar Council] and Aluki Kotierk, who quoted Dalee Sambo, say, ‘We need every Inuk.’ And we do, to achieve the vision for Nunavut.”