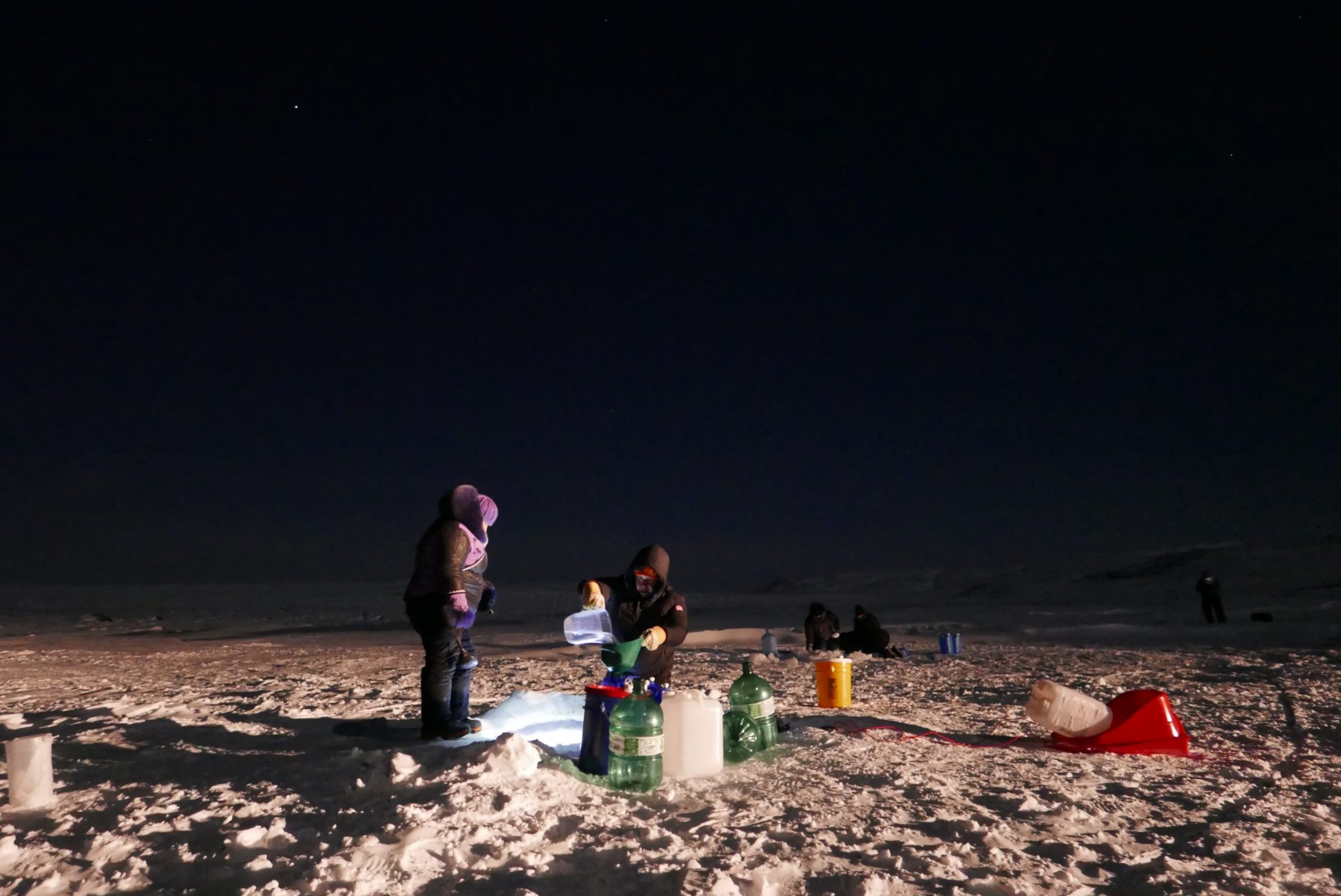 Eric and Hannah Idlaut fill jugs with water Friday evening at the Sylvia Grinnell River after the City of Iqaluit said it received complaints about the municipal water supply smelling like fuel again. Hannah holds the light over a two-feet deep hole, wide enough to insert a four-litre water bottle, while Eric does the filling, using a pitcher and spout. The pair said they could smell fuel in their tap water Friday, but they don’t normally consume it, anyway. Eric comes here each week to get water for him and his parents. (Photo by David Venn)

But levels of fuel that entered the system are below Health Canada’s drinking water values, according to the statement issued by department spokesperson Danarae Sommerville.

On Thursday night, some Iqaluit residents began complaining about a fuel-like smell in their tap water. More concerns were raised on Friday. By Friday morning, more than 50 complaints were posted to a popular Iqaluit Facebook group’s page.

The territory’s Health Department said Saturday it is working with the City of Iqaluit to address the smell of fuel in residents’ water.

“We will continue to monitor and work to improve the system,” the GN’s statement said.

The GN’s report Saturday echoed what the city said on Friday when it reported “a trace amount of hydrocarbons entered the distribution system” on Monday and Wednesday.

It was later determined diesel fuel had contaminated the water supply. The GN’s Health Department issued a do-no-consume advisory, prompting city residents and businesses to rely on bottled water or water they drew themselves from the Sylvia Grinnell River.

In November and December, the Canadian military set up a temporary water purification system that helped meet the city’s water needs by also taking water from the river and distributing the clean water at city-run filling stations.

On Dec. 10, after nearly two months, the Government of Nunavut lifted its do-not-consume order.

On Jan. 6, the city announced the water monitoring station at the water treatment plant detected measurable amounts of hydrocarbons in one of the city’s treated water tanks on Dec. 16. The announcement said the discovery led to a “brief shutdown” of the plant, and staff determined the contamination was due to maintenance.

The government has not issued a do-not-consume order related to last week’s detection of fuel in the water system.

News that a fuel-like smell was once again detected in Iqaluit’s water prompted some people to once again start drawing water through holes cut into the now-frozen Sylvia Grinnell River.

The Government of Nunavut recommends that Iqalummiut who smell fuel oil in their water contact the city’s water quality hotline at 867-979-5603.

The GN is expected to provide an update on the water situation on Monday.