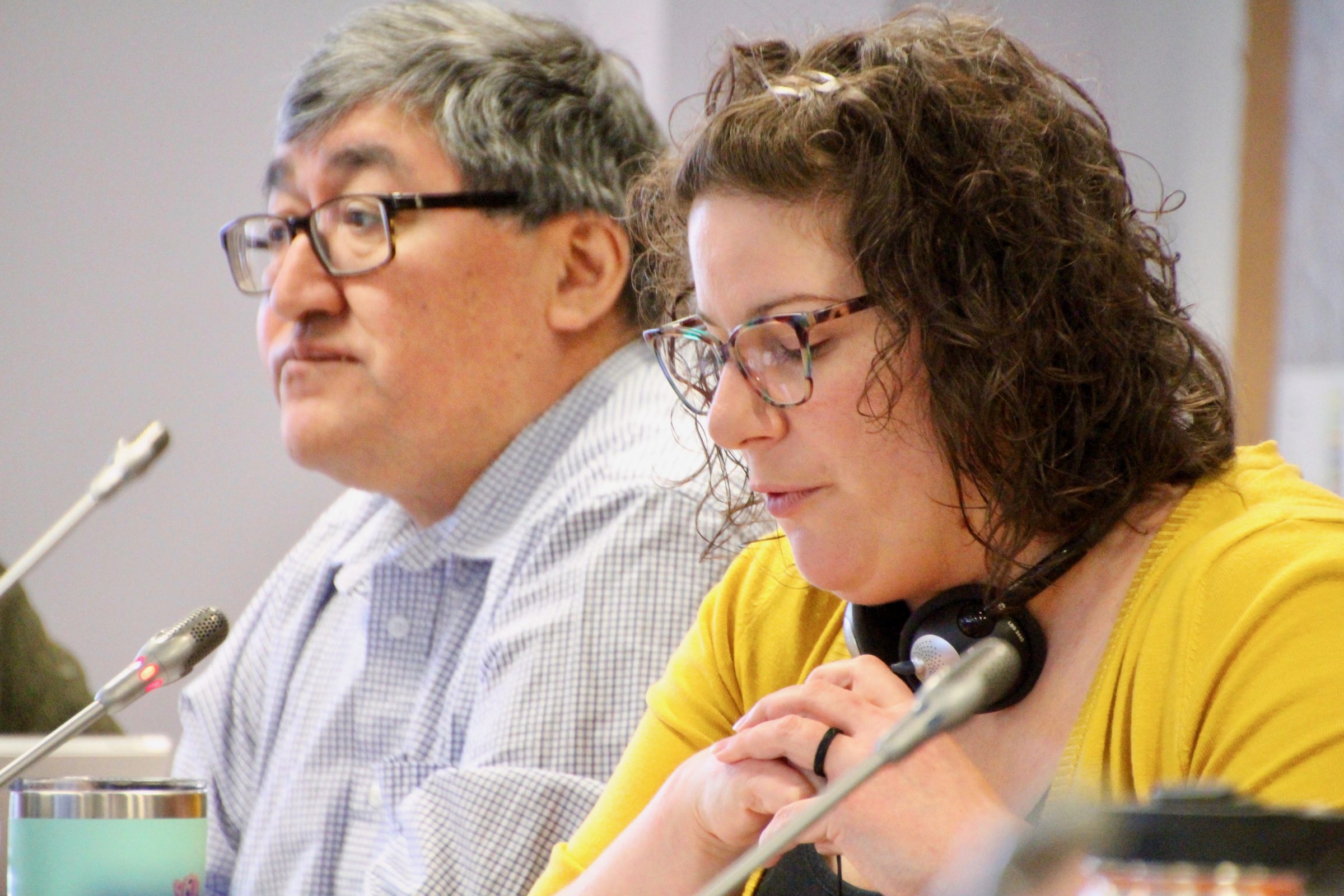 Caryn Smith, a Government of Nunavut wildlife advisor, makes a submission to the Nunavut Wildlife Management Board on Thursday, March 7, to have harvesting ratios for polar bears changed to one female bear for every one male bear. (Photo by Beth Brown)

Polar bear hunting in Nunavut should follow a sex-selective harvesting ratio of one female bear hunted for every one male bear, Nunavut’s Department of Environment told the Nunavut Wildlife Management Board during a March 8 board meeting.

Right now, Nunavut communities can hunt one female bear for every two male bears hunted through an annual allotment of community polar bear tags. That’s except for a Baffin Bay subpopulation of polar bears, where a one-to-one sex-selective harvesting ratio is already in place.

The GN is asking the board to review and approve the change for the current harvest year of 2018-19.

This submission to the wildlife board follows widespread concerns from Nunavummiut over public safety after two deaths by bear mauling in Nunavut’s Kivalliq region last year. Those concerns came out loud and clear during a wildlife management board hearing held in November in Iqaluit, where hunters and trappers groups called the current sex-selective ratio and flex quota system “punitive” to Inuit.

Inuit hunters are saying that overhunting of male bears is causing an imbalance in bear populations and leading to a younger, more aggressive population of male bears.

“We’ve been hearing from communities that increased populations is not the desire,” the senior wildlife advisor to the GN, Caryn Smith, told the wildlife board. “We’ve been more conservative than other jurisdictions as far as harvest ratios.

“This is our approach to address some of the concerns we heard at the public hearing.”

The wildlife management board is now reviewing the GN’s updated draft plan for polar bear management in Nunavut that’s been in the works since 2014.

“Even if you approve the plan, it won’t address this issue,” said the GN’s wildlife director, Drikus Gissing. “We decided to come forward and make this change now.”

The GN’s submission also asks that, when it comes to defence kills, communities only see one tag taken from their total allowable harvest.

Right now, if a community has used up all its bear tags and a female polar bear is killed in defence, that will count as a two-tag reduction from quotas for the next season.

Because human-bear conflict is on the rise in Nunavut, Gissing said this leaves some communities with no tags left for the coming season. That’s especially the case in Nunavut’s Kivalliq region, where the Western Hudson Bay subpopulation is hunted, he said.

When a cub is killed under the new one-to-one harvesting ratio, that kill would count as one half of a male tag and the community would keep the half tag to use—for example, if an elder asks a hunter for a bear cub.

“The underlying message that we got from the communities is that there are too many bears,” said Paul Irngaut, Nunavut Tunngavik Inc.’s director of wildlife and environment.

“We have to be mindful of the outside world because we are being looked at.”

Staff from the Department of Environment say they will “strongly oppose” objections to the change.

“We’re not going to deplete the population overnight,” Gissing said. Should a conservation concern arise from a particular subpopulation, “we’ll hear it from the hunters,” he said.

“Hunters choose males most of the time…. We have to make decisions that are in the best interest of Nunavut.”

But Samuel Iverson, head of polar bear management for Environment and Climate Change Canada, told the wildlife management board that the GN’s plan doesn’t present enough hard evidence for the change to be defended to southern and non-Canadian audiences.

While the federal department respects and accepts that Inuit knowledge is as important as science when it comes to managing bears, Iverson said that the way population surveys are going right now, it could be 10 years before scientists or hunters know what the effects of the sex ratio change will be.

He also said that other jurisdictions have found that lethal bear management isn’t always the most effective way to reduce human-bear conflict.

“It’s not clear how risky this is,” Iverson said. “The proposal isn’t clear.”

When a change was made for the Baffin Bay population, there was more documented evidence for that move, he said.

If the GN does have statistics and documented Inuit knowledge to back up the ratio change, “we would like to see that information,” Iverson said.

Dan Shewchuk, chair of the wildlife management board, said the organization recognizes that bear management in Nunavut is not just about public safety. He said aggressive bears are harmful to Inuit culture and lifestyle, because of damage to cabins, bird colonies and seal populations.

Shewchuk also asked Iverson for more information on the impact that polar bear tourism in northern Manitoba, and studies that use bear collars, has on human-bear conflict in Nunavut. Some in Nunavut worry these interactions make polar bears more likely to venture near communities.

“Nothing is being done about that,” Shewchuk said. “How can it not contribute?”