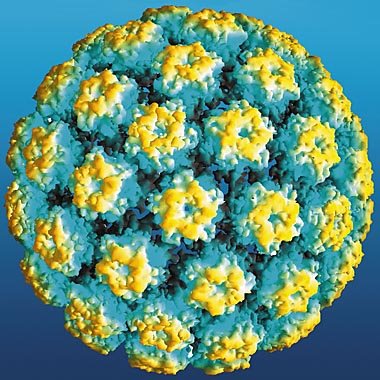 Meet Mr. HPV, also known as the the human papillomavirus. A nasty little critter, HPV causes genital warts as well as cancers of the cervix, vulva and anus. About one in three Nunavut women have tested positive for HPV.

The Government of Nunavut plans to start vaccinating all Grade 6 female students this winter against the human papillomavirus, or HPV.

HPV is believed to be a leading cause of cervical cancer.

The virus is transmitted by sexual contact. The results of infection in women range from genital warts to full-blown cancers of the cervix, uterus and anus.

The school-based HPV vaccination campaign was to set to start in September, but public health and medical staff have been monopolized by efforts to prevent and treat swine flu, Dr. Isaac Sobol, Nunavut’s chief medical officer, said at last week’s International Congress of Circumpolar Health in Yellowknife.

It’s not clear if the vaccination program will be mandatory or voluntary.

One in three women in Nunavut are infected with the HPV and many have tested positive for high-risk forms of the virus, according to data presented at the health conference.

Nunavut’s health department says screening showed that 34.1 per cent of 1,116 women, who were 90 per cent Inuit, tested positive for HPV.

Many of the younger women, 15 to 24, carried cancer-causing strains of HPV.

Many women don’t know they have the virus. Men can also become infected with HPV but rarely suffer health problems as a result.

To protect younger women from getting HPV, the Northwest Territories plans to start vaccinating girls in Grade 4, before they become sexually active.

Quebec offered vaccinations to girls and women aged nine to 26 against HPV, using $40 million in federal money to pay for the purchase of the vaccine, which costs $600 a dose.

Alaska, which also offers free vaccinations of HPV vaccine to Alaska natives, has lowered the incidence of HPV in the state.

In three doses injected over six months, the Gardasil vaccine against HPV offers 100 per cent protection against the development of cervical pre-cancers and genital warts caused by some strains of HPV, with few or no side effects.

Protection offered by the vaccine lasts at least four and a half years after the initial vaccination.

Condoms may also lower the risk of HPV infection, but the only sure way to prevent HPV is to avoid all sexual activity, according to the Centre for Disease Control and Prevention in Atlanta.