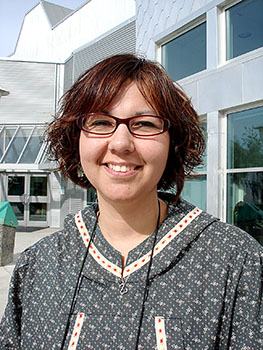 Most Inupiat in Barrow, Alaska, were overjoyed to have a local public health nurse, but non-native health workers there felt threatened, says Doreen Leavitt, a registered nurse from Barrow, who attended the recent International Congress on Circumpolar Health in Yellowknife. (PHOTO BY JANE GEORGE)

YELLOWKNIFE — The only thing that Doreen Leavitt ever wanted to do was work as a nurse in her home community of Barrow, Alaska.

Two weeks after graduating from nursing school in 2001, Leavitt, an Inupiaq, returned to Barrow where she began a new job as a public health nurse, following in the footsteps of her mother, who had worked as a nurse’s aide.

Leavitt decided to work for the Kenai Public Health Centre in southern Alaska, where she was able to study part-time for a masters degree in public health.

When she first graduated from nursing school, Leavitt was unable to get a job at Barrow’s Samuel Simmonds Memorial hospital.

The hospital was built by the U.S. government and now operated under a contract by the Arctic Slope Native Association.

But even though it’s run by a native organization, the hospital doesn’t hire new nursing graduates, even if they are locals and shareholder-owners of the operation.

So Leavitt headed into public health.

“I think those people who do not have an investment in community do feel threatened because there are so few native people in health care,” Leavitt says.

At the time, Leavitt was only Inupiat registered nurse among the 20 to 30 or so nurses working in Barrow and the North Slope’s seven other villages.

Leavitt says doing public health work among her own people was particularly rewarding.

“My favourite part was going to the schools and talking about puberty and sexual health, and then to see some of those teenaged girls we talked to come into the clinic and ask for contraceptives,” she says.

Leavitt also served as a walking role model for teenagers she met. She encouraged them to become nurses, telling them “you can work anywhere in the world, and you can come back home and change lives.”

Most Inupiat welcomed her with open arms — but not all — because they’re so used to being treated by outsiders.

“My first cousin didn’t want to see me because I’m her cousin, not because I’m a nurse. Some people would say ‘you’re Doreen, you’re not a nurse,’ and sometimes I would have the opposite. I would go into a village clinic and they’d say ‘who are you?’ and I’d explain who I was and it was like ‘we want to see you’.”

The Alaskan department of health and public services finally lured Leavitt to Kenai where she runs a larger facility that serves more people.

Leavitt says her goal is to stay there for up to five years and then return to Barrow, armed with the best education and experience possible, so she can compete for a better health care job with more responsibility.

Her husband, a whaler, now commutes back and forth from Barrow.

“But I am missing out on my subsistence native lifestyle,” she says.

Leavitt’s advice to other Inuit who are considering becoming a nurse is to “go out and get your education and come back home.”

Since 1993, Greenland has graduated 77 nurses from Greenland. Some have also graduated from nursing schools in Denmark.

Still, more than seven in 10 nurses who work in the Greenlandic health care system come from outside Greenland.

Most are Danish-speaking Danes who stay in Greenland only for shorter contracts, according to data presented at the recent International Congress on Circumpolar Health.