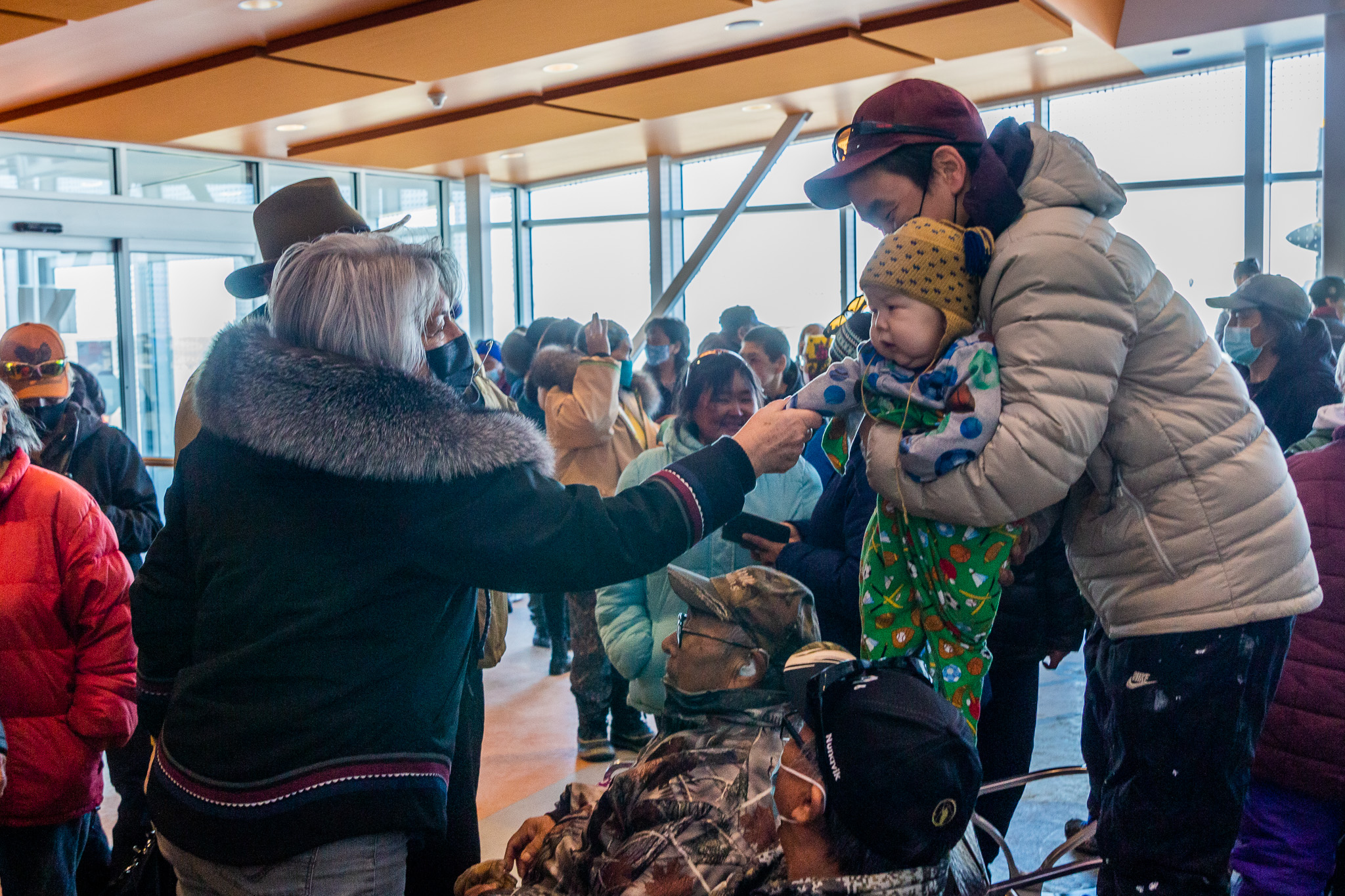 Gov. Gen. Mary Simon shakes hands with Aquujaq Nutara, who is being held by his father, Jaaji Kasudluak, after receiving a cheerful welcome to Inukjuak, Thursday morning. (Photo by Jeff Pelletier)

Gov. Gen. Mary Simon wasted no time this week on her first trip to Nunavik in three years, using the visit to encourage leaders to press ahead on self-government negotiations.

Simon, who hails from Kuujjuaq and is a former president of Makivik Corp., has her own experience as senior negotiator in Nunavik’s self-determination process.

On her first day in the region, she spoke about the issue at a meeting with Makivik Corp. and other Nunavik Inuit organization representatives, emphasizing the need to negotiate a new agreement with the Quebec government.

She’s also been working the other side of the table, pushing Quebec Premier Francois Legault to appoint a negotiator. During briefings with Makivik leaders Monday, she made assurances that work has borne fruit.

“[Legault] made a commitment at the meeting with me that he would appoint a negotiator,” she said. “I asked him to say it twice, so he’s on record saying that.”

Simon sat down with Nunatsiaq News during her five-day tour of Nunavik this week, to discuss why the quest for self-governance in Nunavik is so important to her.

“The objective of negotiating self-determination or self-government agreements in, I think, all parts of Canada, Indigenous communities, is to bring back the power that we had prior to colonization,” she said.

Simon said one of her visions for Inuit self-determination is that infrastructure and social development in the Arctic should match some of the development that has occurred in the rest of Canada.

However, she said, development in Nunavik must be led by and controlled by Inuit in the region.

“For Inuit that’s important, that there is a meshing of ways of looking at how infrastructure is developed, and that infrastructure supports different things like education, health, municipal service,” she said.

“All these different services that are in the communities are going to be encompassed by this self-government arrangement, you have to look at how these things evolve as you negotiate self-government.”

There are areas where Nunavimmiut are leading the charge when it comes to social issues, through the Isuarsivik Regional Recovery Centre in Kuujjuaq and Unaaq Men’s Association in Inukjuak.

“Communities, on the one hand, have a lot of social issues, but on the other hand they’re thriving as well, they’re speaking their language, they’re practising their culture, and in some of the schools we’ve been to, people that work there speak to the students in Inuktitut.”

Simon’s tour of Nunavik included stops in Kuujjuaq, Kangiqsualujjuaq and Inukjuak. A scheduled visit to Kangiqsujuaq was cancelled Wednesday due to poor flying conditions, with Simon calling representatives of the community to apologize and promising to come back in the future.

She called her Nunavik visit “heartwarming” and “rewarding.”

Governors general usually serve a five-year term. In the four years that remain in Simon’s term, she said she hopes she can visit every Nunavik community, and see as much of Nunavut, Northwest Territories and Yukon as she can.

“I have a lot of travelling to do,” she said.

Whenever Simon makes it back to Nunavik, she’ll be welcomed with open arms, said Mary Johannes, Kuujjuaq’s mayor and a friend of Simon’s family.

“This was a special moment for us, and for our community, our town, and to welcome her home,” Johannes said. “It is a special week for us and we hope to see her again.”

Next, she’s heading to Toronto for the Juno Awards, where she will be presenting the Humanitarian Award to Inuk singer-songwriter Susan Aglukark.