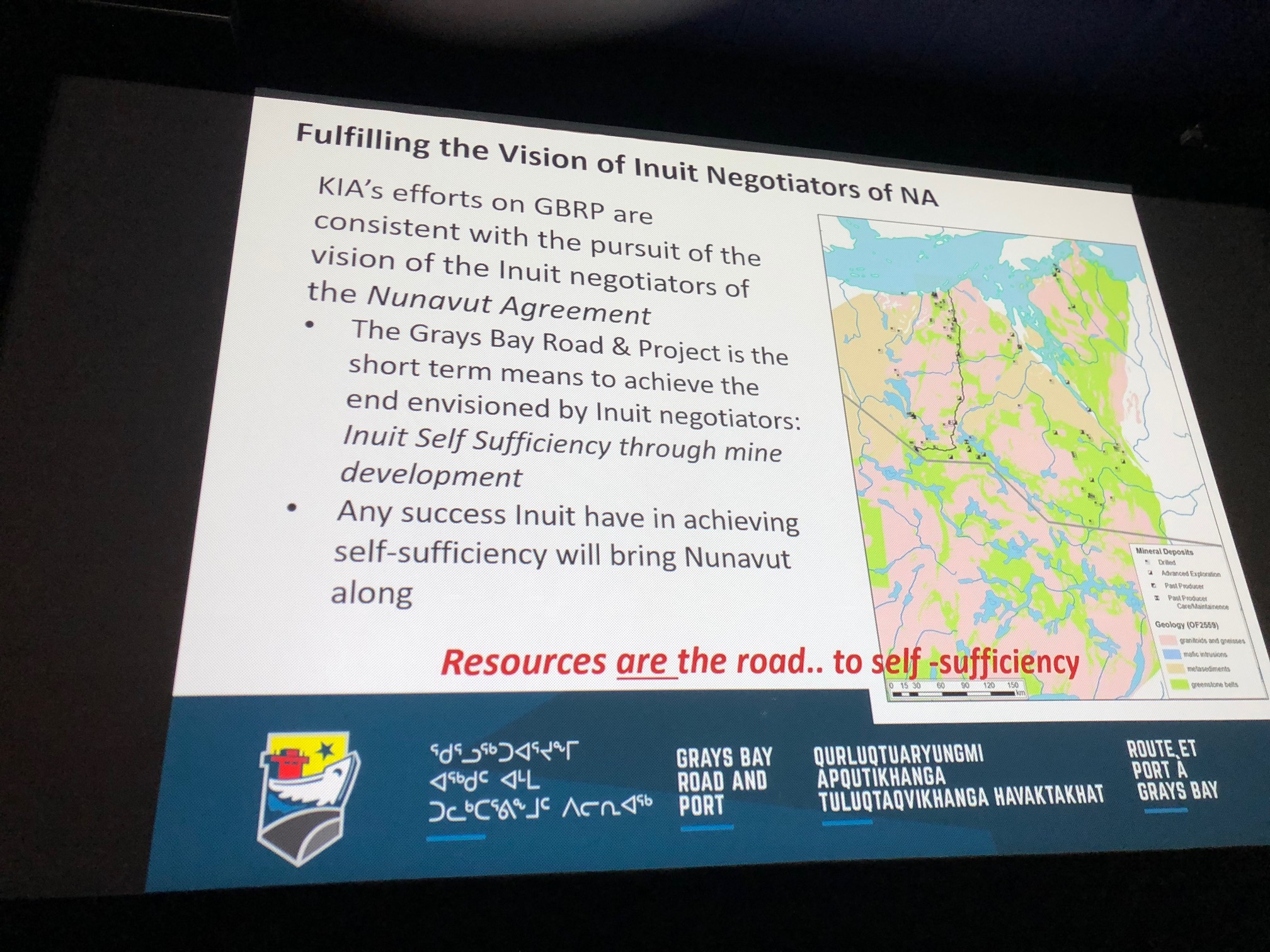 This is a slide from the Nunavut Resources Corp.’s presentation on the Grays Bay Road and Port Project at last week’s Nunavut Mining Symposium. The project’s promoters have submitted another application for support to the federal trade corridors project. (Photo by Jane George)

Western Nunavut’s Grays Bay Road and Port Project is back: the Kitikmeot Inuit Association’s wholly-owned subsidiary, the Nunavut Resources Corp., has reapplied for money from the federal trade corridors program.

“We have just applied for funding from the federal government to make the project ‘shovel ready,” said Scott Northey, the NRC’s director and CEO, who spoke at last week’s Nunavut Mining Symposium in Iqaluit.

To do that, they’ll need about $22-million to add to the roughly $7 million that Nunavut Tunngavik Inc. has committed to the project.

The $550-million Grays Bay project would involve the construction of a 227-kilometre all-weather road running from the site of the defunct Jericho mine, which is located at the northern end of the Tibbit-Contwoyto winter road, to a deep-sea port at Grays Bay on Coronation Gulf.

The Grays Bay road would overlap with a road proposed under the moribund Izok corridor zinc-lead mining project promoted by Chinese-owned MMG Resources Inc., but mothballed since April 2013.

The Grays Bay road would also form the first phase of a long-dreamed-about all-weather road between Yellowknife and the Arctic Coast.

Grays Bay is the most advanced trade corridors project in the North, developed by the KIA to promote responsible economic development, Northey said in his presentation.

And Grays Bay has received a new letter of support from the Government of Nunavut, he said.

The project promoters had wanted the GN to commit $138 million, but last March the GN decided not to commit any more than the $2 million given in June 2017 to help the project’s development.

The new GN letter does not include any commitment of financial support at all, Premier Joe Savikataaq told Nunatsiaq News.

But, with the support allocated last November by NTI and other money from unspecified sources, they’re now aiming for the $29 million to restart the environmental review process and get the project “shovel-ready,” according to Northey.

Last spring, the KIA was disappointed to learn that Grays Bay would not receive help under the federal transportation corridors program, which instead spent money on Nunavut airport overhauls.

The hope is now that a federal contribution could eventually rise from $135 million to $140 million, so there would only be the balance of the project’s total cost to raise, Northey said.

Less than three weeks after the GN withdrew its support last year, the Nunavut Impact Review Board said it was suspending its environmental and socio-economic assessment of the project.

But Northey said they now plan to restart that review.

At the Nunavut Mining Symposium, the Grays Bay project was also touted by KIA President Stanley Anablak who spoke on the opening day of the Iqaluit conference, whose theme was “Rocks, Roads and Resources.”

To gain more support for the project, the KIA and NRC met last October with the full caucus of the Nunavut legislature.

But Grays Bay has not come up since in Nunavut legislature.