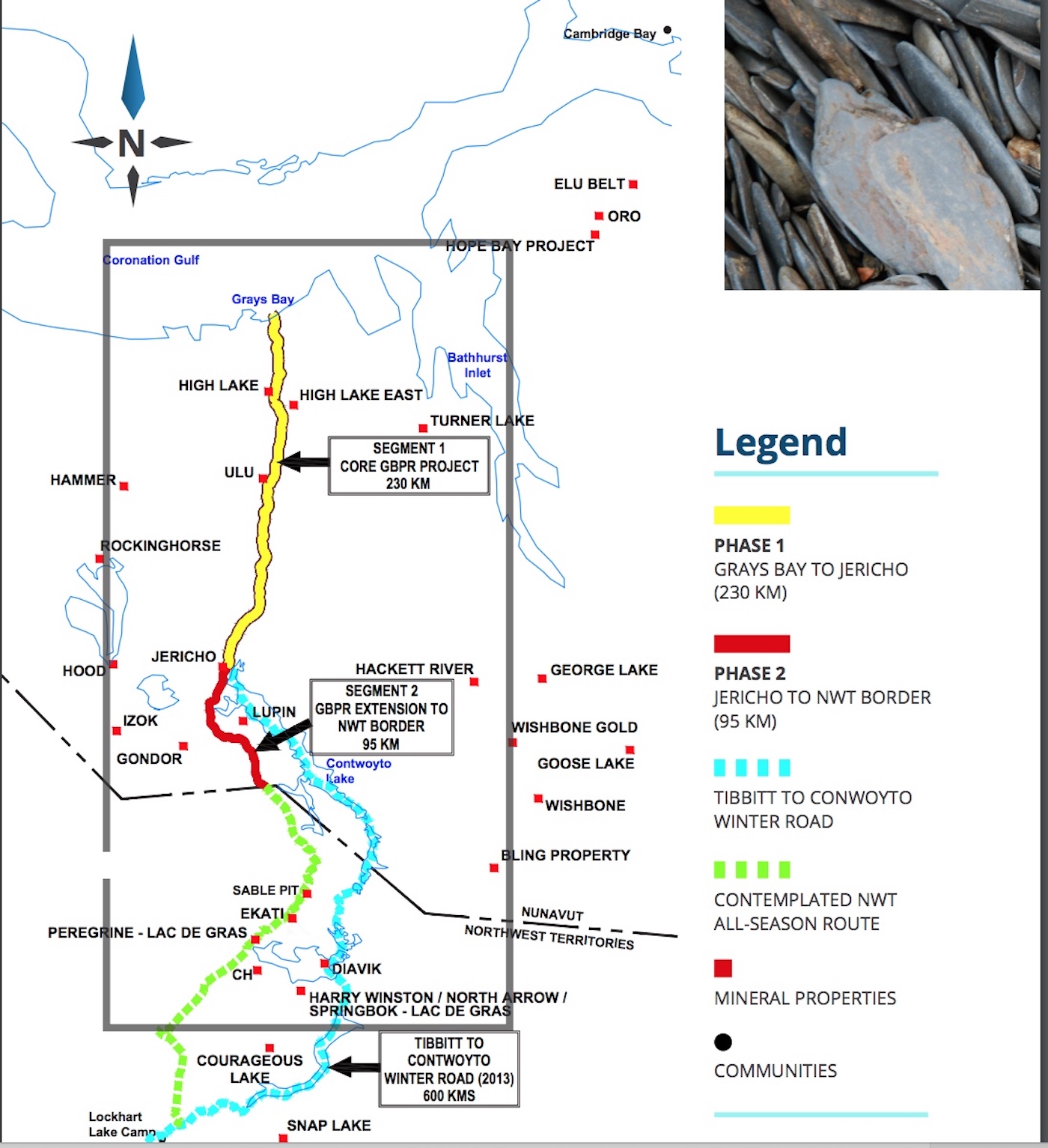 This map from a Grays Bay information pamphlet shows where the deep-sea port and road would be located in western Nunavut. The grand plan is now “stalled,” the Kitikmeot Inuit Association said on Tuesday, Oct. 6. (Screen shot)

In August 2019, the western Arctic road and deep-sea port project received $21.5 million from the federal government for preparatory work to get the $550-million project “shovel-ready” for regulators and investors.

The plan was to work at getting the project shovel-ready and then seek out federal funding to begin construction, said Emingak, speaking at the Luke Novoligak Community Hall during the KIA’s annual general meeting in Cambridge Bay on Tuesday, Oct. 6.

Getting that money from Ottawa “in a post-COVID-19 world seems like a slam dunk as a source of economic stimulus,” Emingak said in his report.

Then, the project promoters planned to raise third-party capital and fund the rest of the construction process into operation, he said.

“Once in operation and, with usage charges in place, there would be revenue generation,” he said.

But now “the project has stalled,” Emingak said, saying the Nunavut Resources Corp., the KIA’s wholly owned subsidiary and the project’s main proponent, is off the file.

In February, the NRC’s president, Charlie Evalik, resigned. Then, in March, the KIA board decided to take over from NRC as lead for the Grays Bay project.

“The decision was not easy for KIA to make,” Emingak said.

The decision was made to add “more transparency and accountability to move the project forward.”

For now, the “NRC’s ability to generate revenue has been eliminated and its available cash has been significantly depleted,” Emingak said, adding that may be the last report from the NRC “for a while.”

Delegates to the AGM were to get a closed-door briefing on Grays Bay during the meeting, he said.

Back in 2010, the KIA said it wanted to see Inuit benefit from the “upside” of non-renewable resource development through the NRC.

The corporation planned to invest in gas, oil or mineral projects and bring them into production, but that didn’t happen although various deals were signed.

During his report to the AGM on Monday, Emingak said the NRC had been running on $3 million it received in 2012 from the federal government.

He said the KIA hadn’t given the NRC any money for the past three years.

He also said that “the KIA did not advance the full amount of monies” received from the federal government. Instead, the KIA set aside $21.5 million to reimburse itself “for expenses incurred to the project.”

The $550-million Grays Bay project would involve the construction of a 227-kilometre all-weather road running from the site of the defunct Jericho mine, which is located at the northern end of the Tibbitt-Contwoyto winter road, to a deep-sea port at Grays Bay on Coronation Gulf.

The Grays Bay road would overlap with a road proposed as part of the moribund Izok corridor zinc-lead mining project that’s been promoted by Chinese-owned MMG Ltd., but mothballed since April 2013.

At the AGM on Oct. 6, the KIA also released its financial statements, which showed a budget of about $15 million and roughly $56 million in assets.

The financial presentation from KIA President Stanley Anablak was broadcast live on Facebook but due to poor audio on the feed, it was hard to follow.

The financial statements have not been posted on the KIA’s Facebook page.

From other documents posted on the KIA Facebook page, it is clear that COVID-19 has had a large financial impact on its operations: there have been fewer royalties from TMAC Resources Inc.’s Hope Bay gold mine, which slowed production in March, and a suspension of ongoing negotiations on the Inuit Impact and Benefit Agreement with the federal government concerning the Franklin wrecks site.

As a COVID-19 precaution, the KIA AGM, while broadcast online, was not open to the general public—only to the KIA board, registered community delegates and KIA staff.

As well, the KIA decided there would be no community feast and no arts and crafts sales this year due to the public health measures in place to prevent the spread of COVID-19.